These past Novembers haven't received many words from me... just six posts each!  I didn't want to let this November pass without at least one though... and in the middle of the dark night, the words began to come. I hope I can remember some of them...
: :
My first thankful Thanksgiving thought this year, as I was gathering up my morning doses,  was I'm thankful for medicines and doctors.  Yes, I am still sick... on the mend, but still not well {but let's save the details for another day!}  And my second, as she stumbled out to the living room bundled in a blanket, was that all of a sudden we were back to four.  It is good to be whole again, if just for a few days!  Even though our four weren't around one table for a meal on this day of thanks, the day was beautiful and special and full. 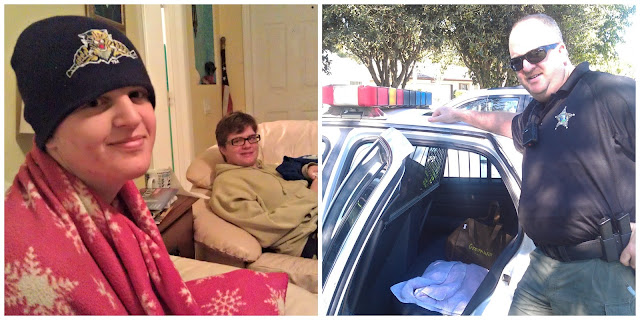 Eric headed out the door for work before first light, and three gathered on the couch for the Macy's parade. There were congo squares in the oven, high flying balloons and the Rockettes on the television...my favorite way to celebrate Thanksgiving morning!  I missed more of the parade than usual, but enjoyed a little more time in the kitchen with Eric as he stopped by to prepare some side dishes for the shift lunch at the substation.  Sweet potatoes and stuffing... and a special cup of gluten-free gravy just-for-him!  {Someone else made the turkey!} As we headed out to my Mom's for dinner, I took one last glimpse at the kitchen, piled high with mess, I hoped it would be a slow day for the police and that I might come home to clean...

The Ice Cream Man carved the turkey, but the day was less about the food and more about being together... and it was perfect.  The afternoon and evening were full of laughter and the people I love {and knowing Eric was having two dinners made him not being there okay!}  Games were played around the table, children squealed as they ran though and around the house, mothers and daughters spent time, and we celebrated a little birthday.  Seven.  Sweet seven!  Ice cream sundaes instead of pie.  Congo squares instead of brownies. And since we passed on veggies with the meal, it seemed we had plenty of room for dessert... 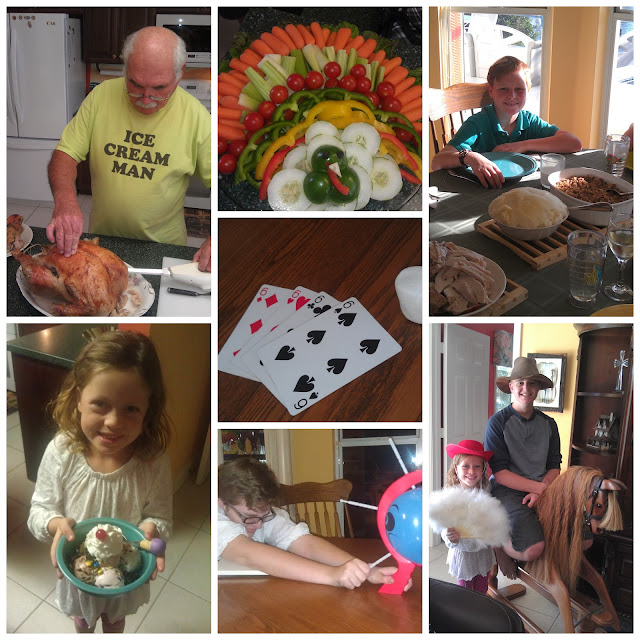 I hope your day was a lovely celebration of  love and thanks!