Summer is flying by... school has already been in session for a week. It seems too fast, although I think Eric is happy to be back to his regular schedule and is enjoying catching up with the kids at his schools. Here are a few pieces of a summer enjoyed... 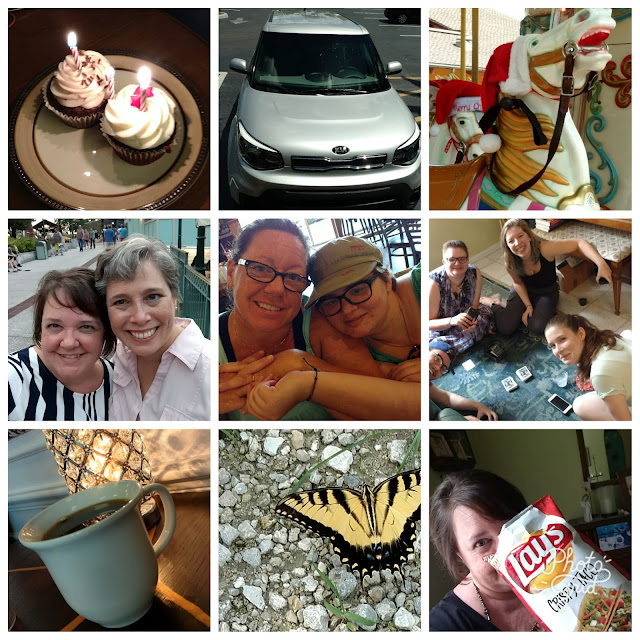 1. A couple gluten-free cupcakes for the birthday boy! We celebrated very quietly
this year, and I think maybe it was his worst birthday ever. He says no...

2. The Silver Sweetie. A forced purchase, but we can only count ourselves
thankful that Eric & Laura were not hurt in the accident that totaled our car.
We are SO thankful.

3. The past couple of years have had us really celebrating Christmas in July! We were up at
Disney Springs and they went all out! We even saw Santa!

4. When people I love come to Orlando, we make every effort to make the 3 1/2 hour trip
to see them. It had probably been over 10 years since I had seen my cousin Jenn.
The visit was long overdue and completely wonderful.

6. Games in the piano room. I love these people and their fun!

7. Coffee by chandelier light... at the new gluten-free bakery!

8. A Sunday walk in the swamp for two... and there were beautiful butterflies
everywhere. Not monarchs, but we can't help loving butterflies more just knowing
Camden is working to save them!

When you no longer have weekends filled with twelve activities you need to transport kids to, the days stretch long... and wonderful. We have been practicing for our empty nest, trying to fill the days with simple adventures. Some weekends we win, and others... we waste away, which still actually may be a win.

Cam's flight back to school in June was out of an airport about an hour away. We decided not to head straight home and make a little adventure of our day. Thank you Google, for showing us a fun little spot we could explore on the way home.

Matlacha. Until about six months ago, I thought it was pronounced just as it appears. I was wrong, and laughed at myself when I found out - because of course I hear its name on the news! Mat-la-shey. Huh. A thousand stories matched up in my mind.

We wound our way along the narrow roads and then finally across the bridge to the little bright island of Matlacha. Our first stop was a little fudge shop, and it turned out to be a great first stop. A little friendly conversation with the shop owner provided all we needed to know... 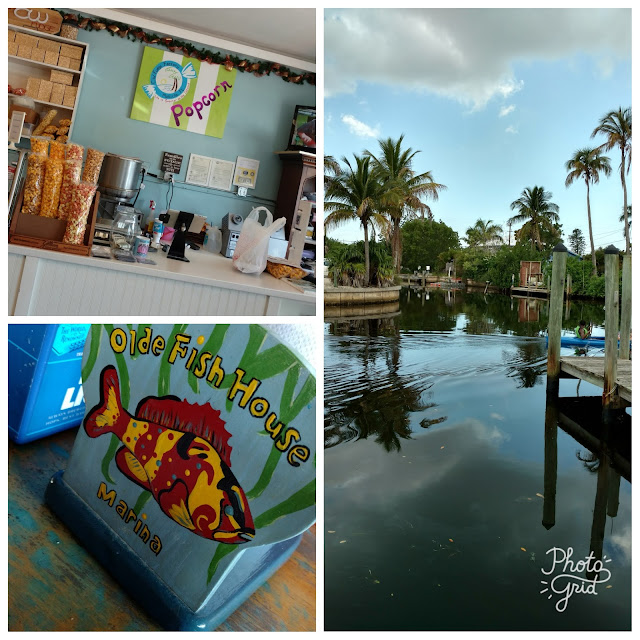 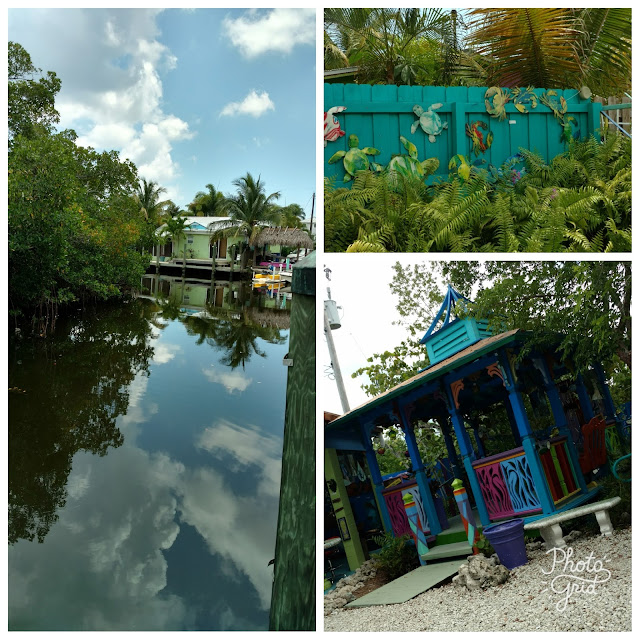 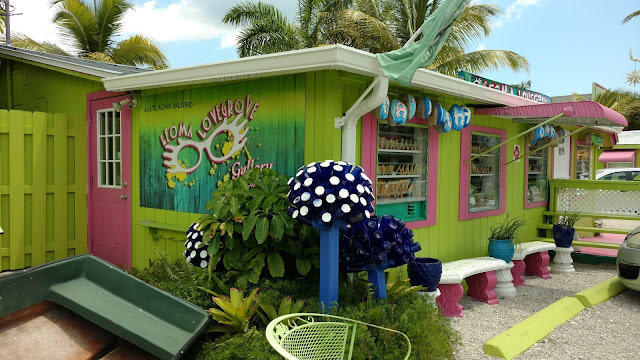 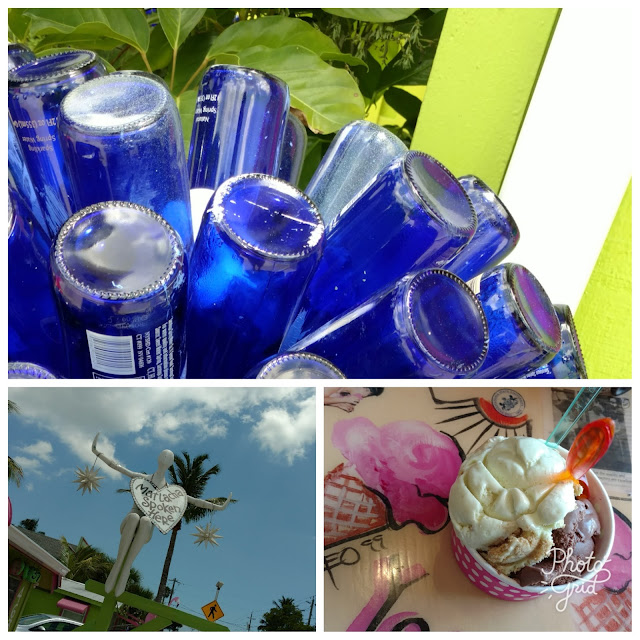 I love the scenic route... especially when it includes ice cream. Our only disappointment was that the art garden at Leoma Lovegrove's gallery was closed for the summer! I guess that means we'll have to return...

camping with a view...

It felt like it had been a while since we camped, and we were thrilled to book two weekends this past spring. The first was a "working weekend" of helping put on a super-fun Sweet Sixteen camp out for friends, which made the second weekend of camping even more glorious.

We returned to a spot we hadn't been to in years... just far enough away from home to feel completely away. Our sites backed up to a preserve, and when we situated tents and tables and kitchen, we felt like it was almost private. We barely noticed cars driving though the campground or little RVs backing in and out.

Eric & I set up the tent facing the preserve, and left the doors to the screen room unzipped, which meant we woke up to this... 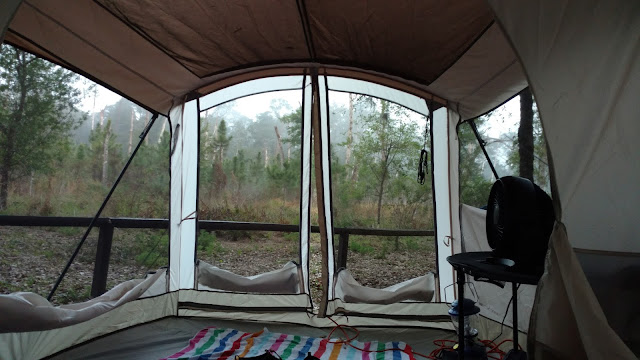 It was the best of the outdoors while being snuggled deep into our sleeping bags.

After our afternoon hike and a shower to rinse off the first layer of camping dirt, I sat by the rail with my feet up. Hair damp, sun shining, and the view before me, I felt like I could have been in Africa. It didn't hurt that I have been reading an African Love Story... 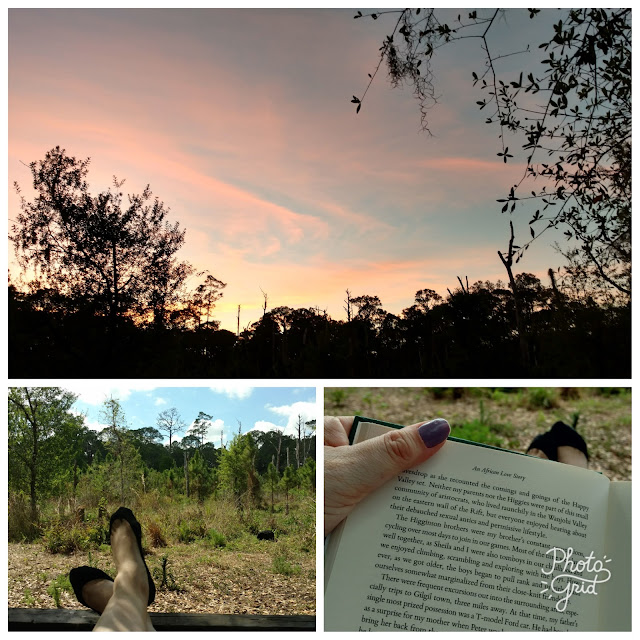 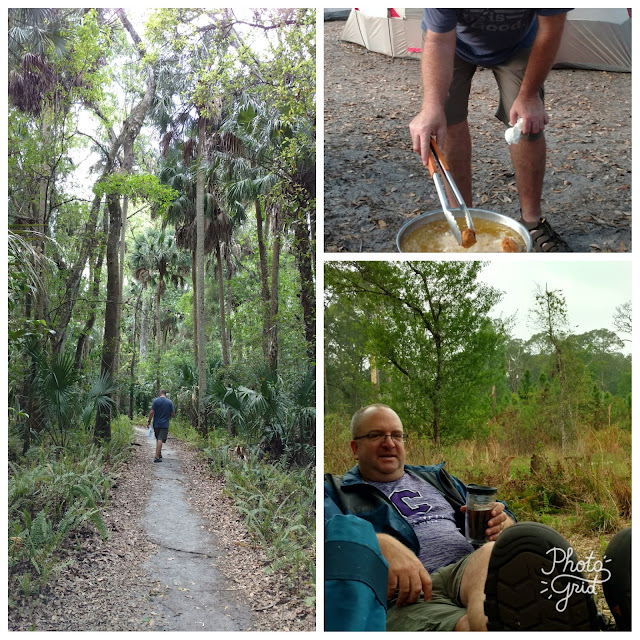 We sat by the fire, we laughed, we played cards and Tenzi late into the night. A weekend out in the fresh air was just what we needed. It added life to our souls. And with the end of the summer heat nearly in sight (only 2 months away!) we are starting to plan a fall trip or two... before the snowbirds scoop up all the great camping spots! 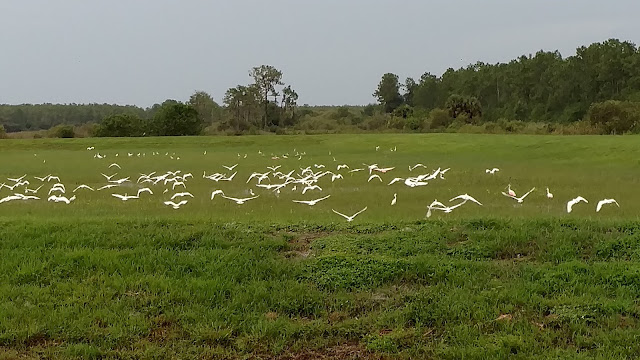 Sometimes I have loved the peacefulness of an ordinary Sunday.It is like standing in a newly planted garden after a warm rain. You can feel the silent and invisible life. -Marilynne Robinson

We've had a rule since they were pretty small - always bring extra clothes to the beach. It sounds silly, but there have been lots of evenings we'd go to just splash our feet, play in the sand and watch the sunset... not planning on a swim, because maybe it was too cold, or we just had 20 minutes. But we learned our lesson early on. Someone always ended up soaked from head to toe - either by chance or by desire. So it became a rule. No matter what, towels & a full change of clothes were part of the plan.

A storm was rolling in at home, and we thought it might be storming at the beach... but on his last night, we took a chance. Twenty minutes of drive time can make a big difference, and it did. Perfect beach night weather, with not a storm cloud in sight. 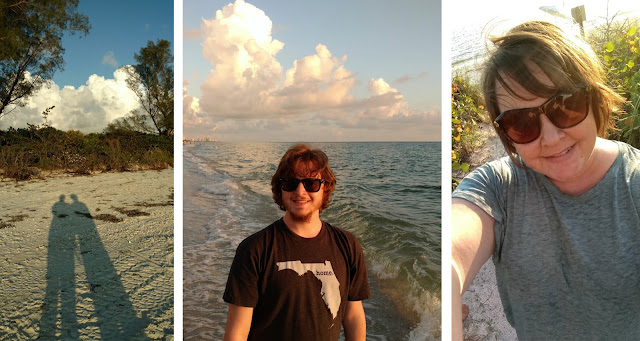 We walked and wrote messages in the sand. We laughed at the coquinas at the edge of the surf. We talked, and we didn't. And then we waited for the sun to set... the whole reason we came on his last night home. As we stood in the shallow, waves lapping over our feet, he said... I kind of want to just swim. His shorts were half-way to soaked, and it didn't take him more than five minutes from to wanting to, to deciding he just needed to be in. 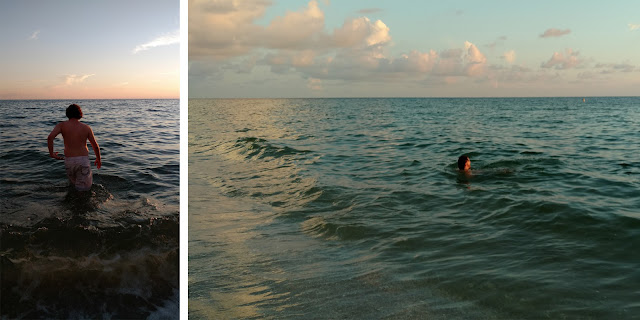 What can a mom do but smile? And remember that rule from a lifetime ago. A time when I was almost his whole world, when I could scoop his whole little self into my arms and just hold on.

There are days I'd go back to... try again, do better... savor.
But tonight I just laugh... and soak in this time, just us... hoping it will last until Christmas.

p.s...and when we were almost home, he asked did you grab my shoes? And so his favorite footwear spent the night on the beach. He was able to rescue them, with an hour to spare, before we had to leave for the airport!

to be welcomed is to be loved...

Last week I drove my niece & nephew to camp for two days... and the camp just happened to be at our old church, across town. On the second day, I knew I needed to take the time to scoot and and say hi to Miss Julie, our favorite pre-school teacher, who taught both of my kids, as well as Tina's.

On the way in, the organist saw me and wrapped me up in his arms, so happy to see me. {Eric & I took his son to the youth gathering in 2001!} He invited me to come see his music camp musical during the Sunday service, or at least the dress rehearsal happening in 2 hours.

I finally made it to Julie... her smile was as bright as mine, and she welcomed me with open arms. We chatted, caught up on our kids, and made a promise to make a lunch date soon.

This church will always have a element of "home" for us... it was where our kids met Jesus, where I thought they would be married... the church of their childhood. In 2005 we moved to our current church, closer to home and a chance to be part of a new mission. It is hard to believe we have now been here longer than we were there... 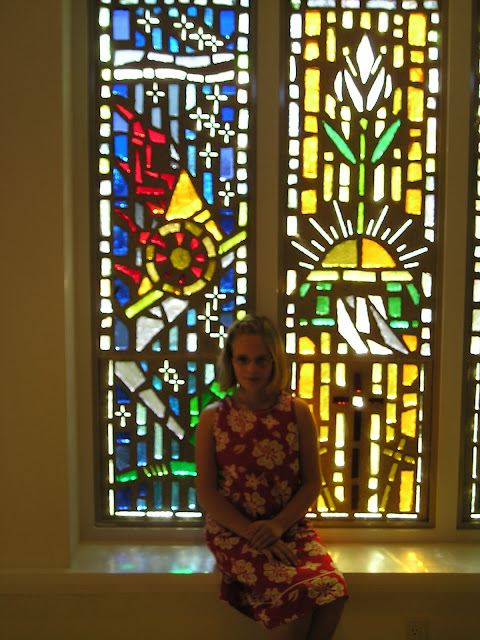 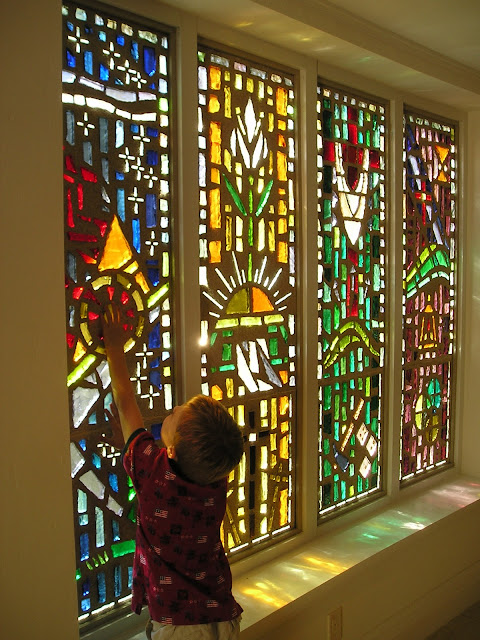 I called Eric, and he had time to come over to see the dress rehearsal with me... and it was fantastic. There were more hugs all around, a little unexpected police business, and then we drove away. How beautiful it was to be so welcomed... and the love they shared, the love of Christ, shone all around our day.