Dear Friday Letters...
It's been a while.
I have had plenty to say, but sometimes I just think it, and forget to write it down.

Dear Disney World,
Thank you, thank you, thank you!!!  After riding the Seven Dwarfs Mine Train before opening day I said okay, the rest of this trip is gravy!  And really, it was.  I had been watching to progress, and watching every website I could think of, waiting for the opening day announcement! I was disappointed that it would open after we left, but I held out hope for the 24 hour event... and by 8am, we had ridden twice!  You outdid yourselves!  This ride is fun and beautiful! 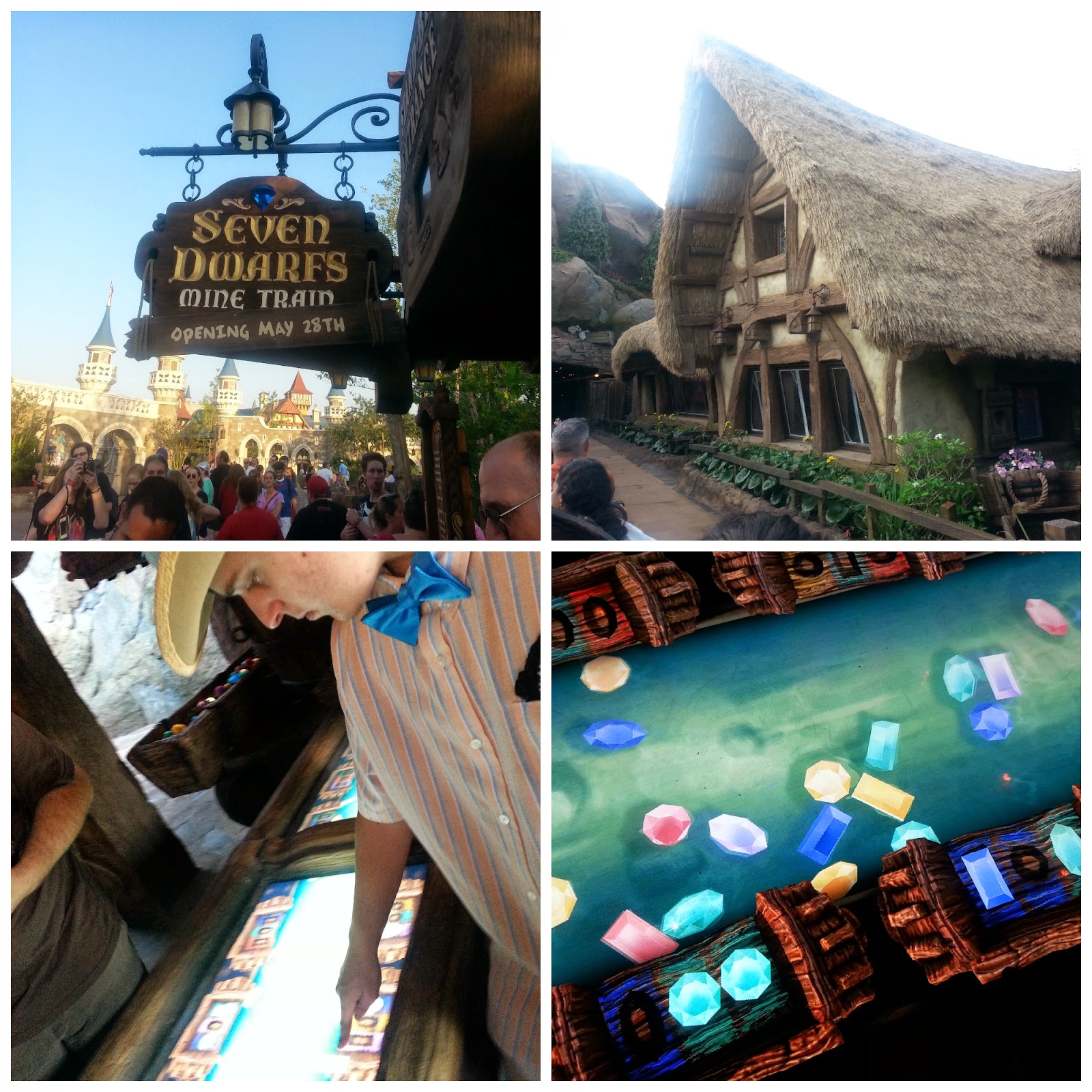 Dear Imagineers,
I love your imaginations!
The Festival of Fantasy parade was spectacular! And the costumes!!!  I think I might need one of those circus dresses... 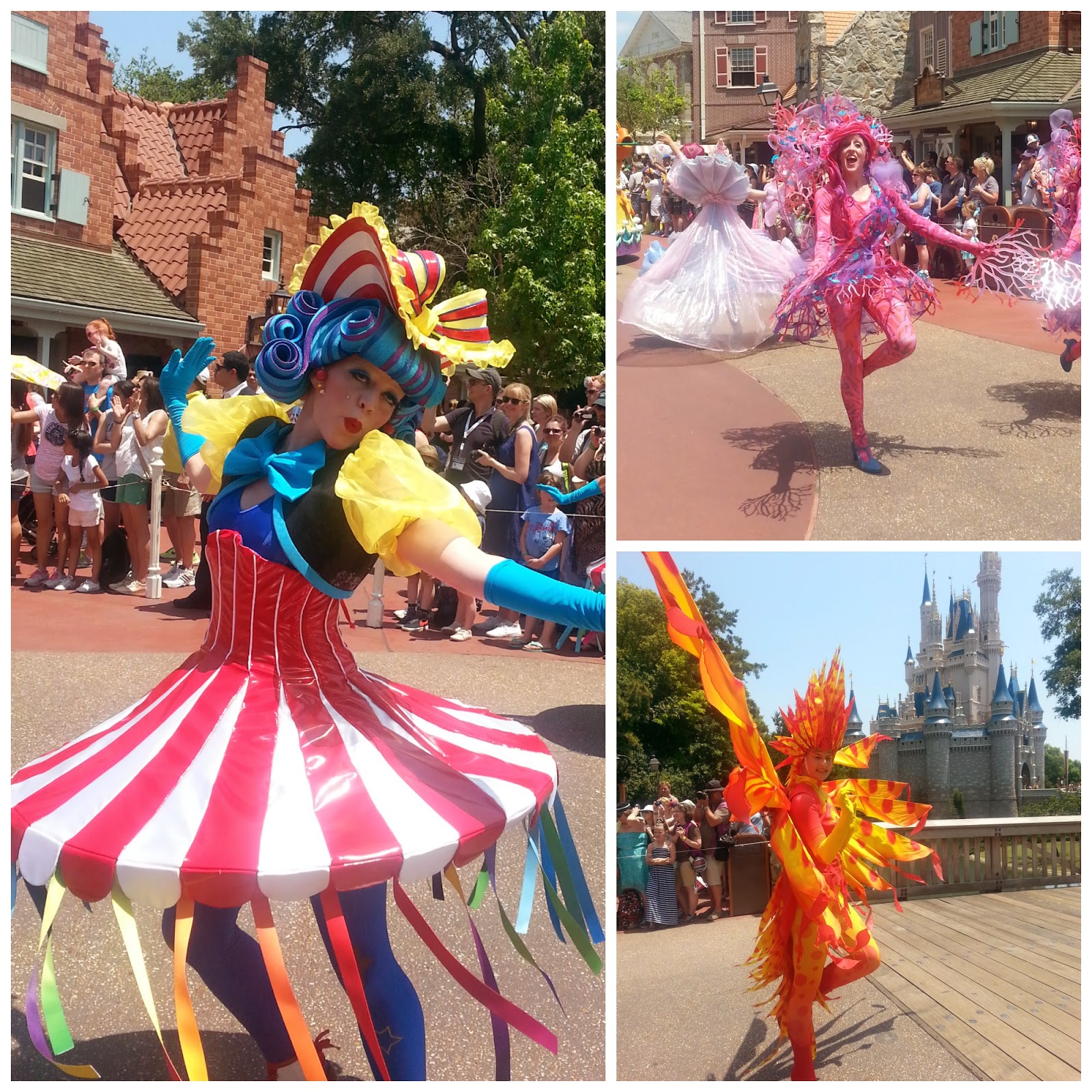 Dear Buzy Bee Suz,
Thank you for driving out to safari road and the trail!  I loved sharing it with you and your family!  I wish you could have seen the baby gators, but seeing deer, owls and the BIG gator was fantastic!  I hope you'll come out again! 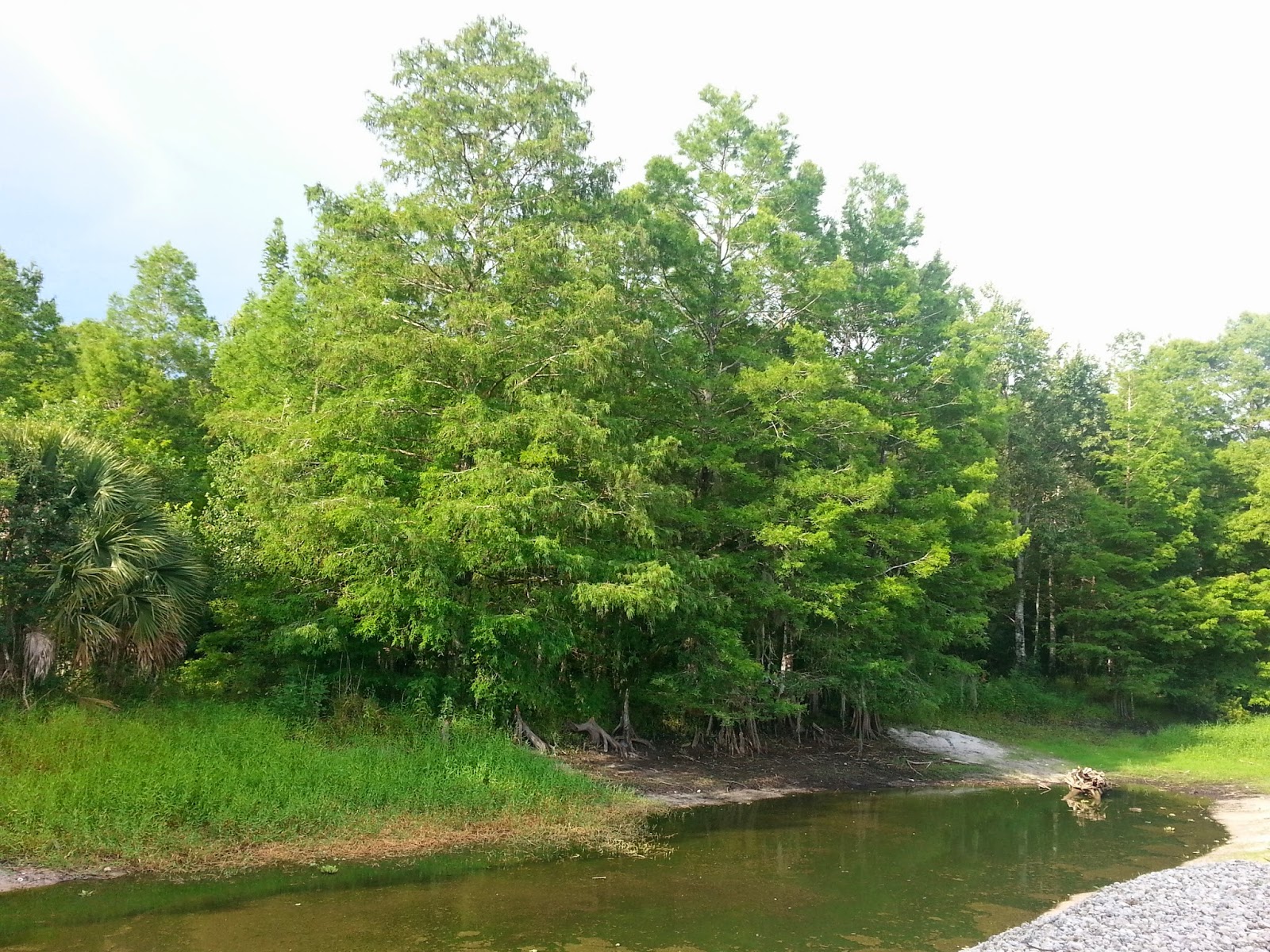 Dear Tanya,
Oh, my dear long, lost friend!  It was SO wonderful to see you, even if it was only two ten minute visits! Your family is beautiful, and your joy is always contagious! 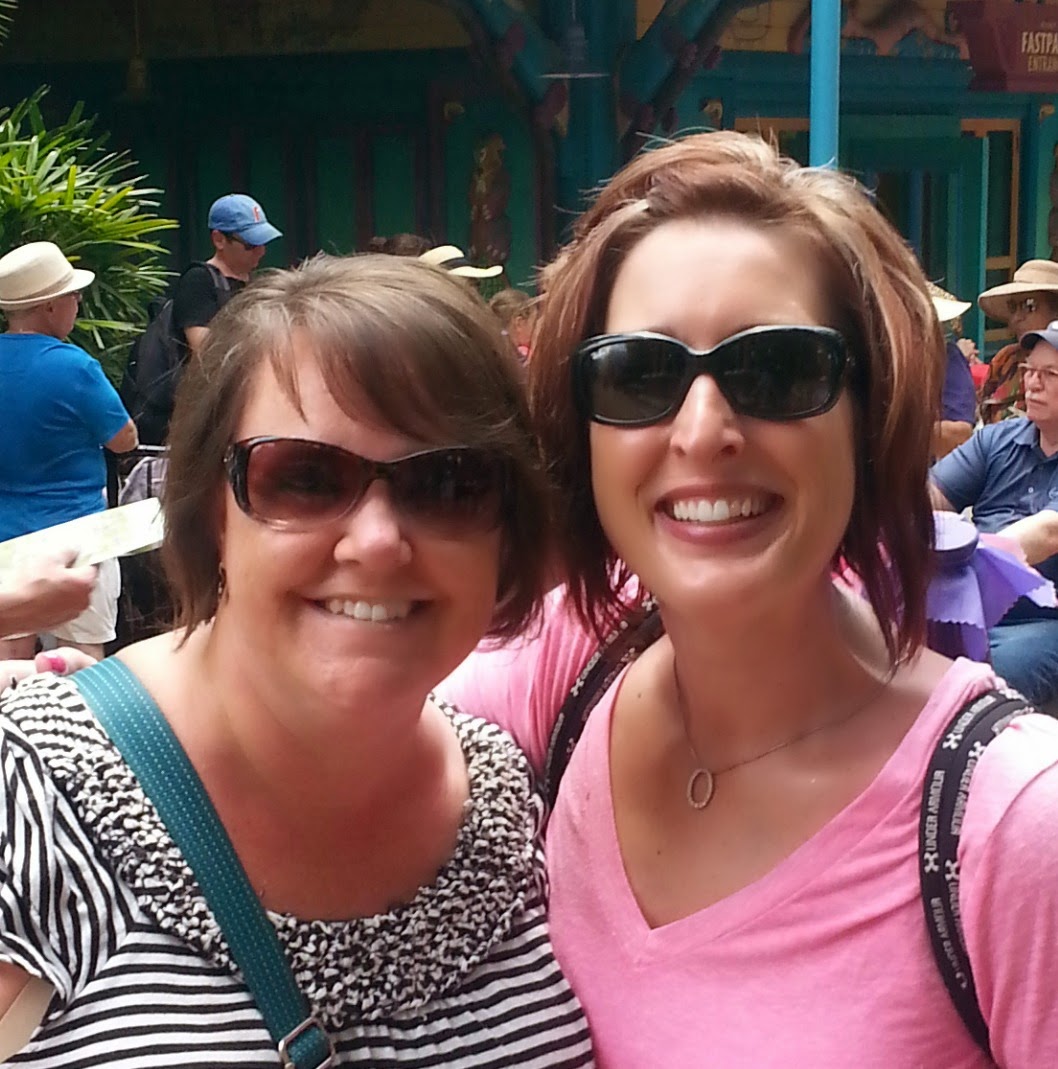 And now... I'm running out to collect supplies for graduation gifts.
We have a five-party marathon tomorrow for these beauties: 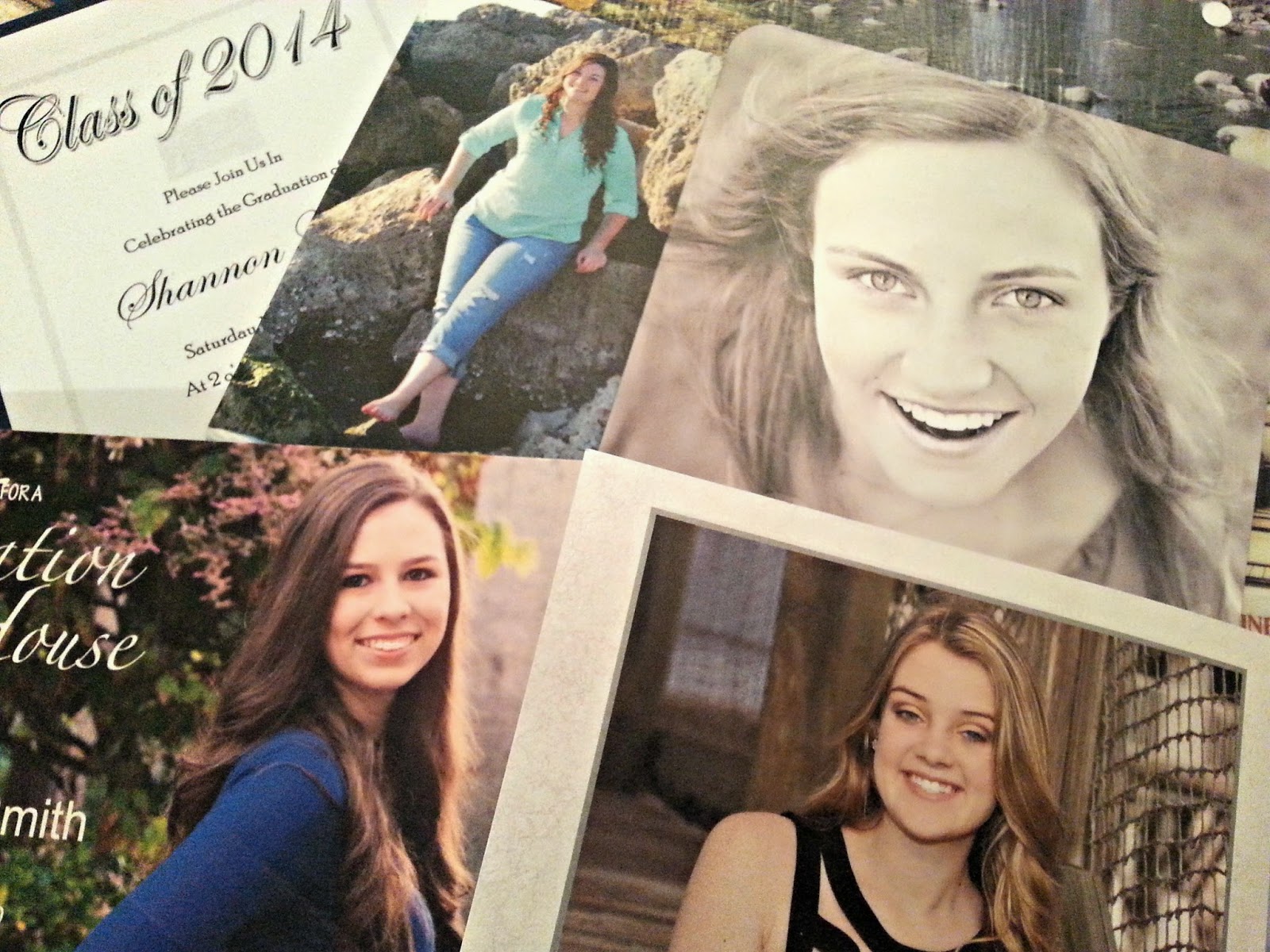 We made a little trip to Disney World over the weekend... {well, it wasn't really that little, it was more of a last hurrah on our year-long passes!} I hardly slept for three days before we left, because, yes, I am known to act like a five year old, especially when it comes to Disney and Christmas! 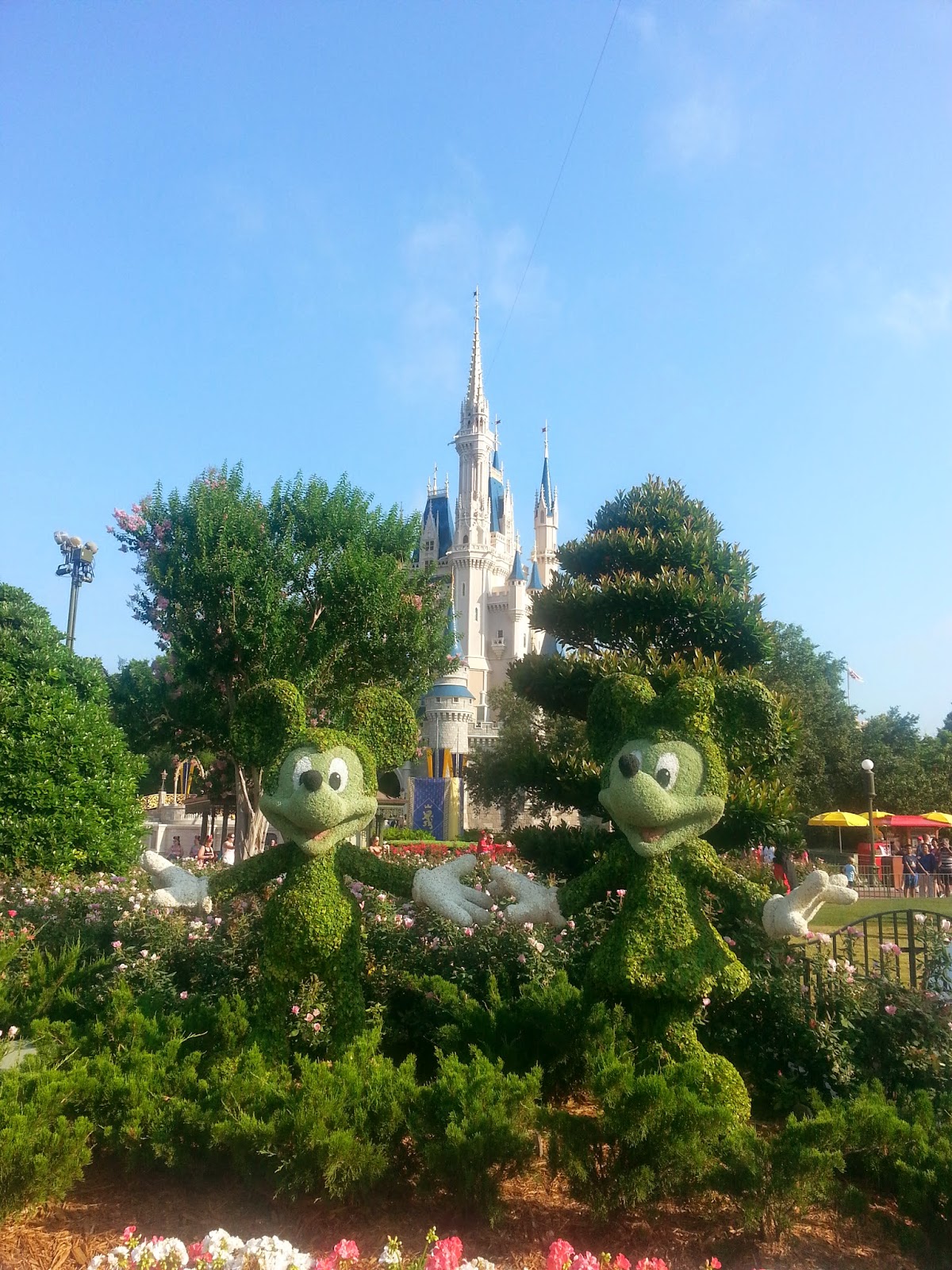 The plan was to work a half day Thursday and leave as soon as Camden got out of school... but when my boss said I didn't have to come in at all on Thursday, we made Cam leave school early.  I am still not sure if he was really on board with that, but it was great to be arriving about the same time we would have been leaving our house!

Believe it or not, after a year of Disney, there were still plenty of things we hadn't yet done.  Like DisneyQuest, playing the Fantasia mini-golf course... and eating at the Irish Pub in Downtown Disney. That meal was definitely a favorite... delicious gluten-free fish & chips for my husband!  {I actually liked his better!} 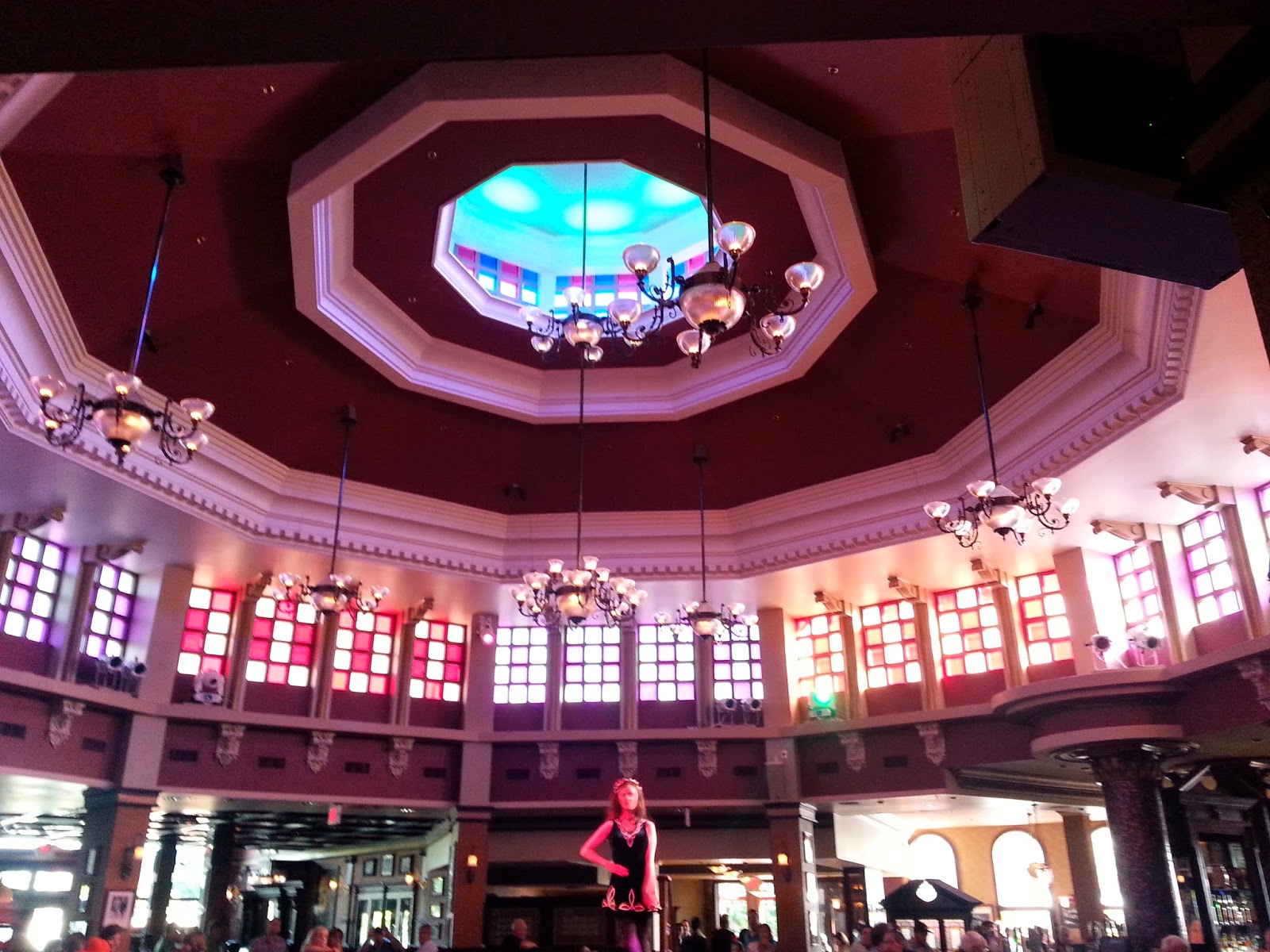 Friday was the 24 Hour event at Magic Kingdom.... we may not have spent ALL 24 hours, but we were there when it opened at 6am, and made it through until 3:30am {with an afternoon swim/nap break.}  It was a day when dressing up was encouraged, and so... we did. 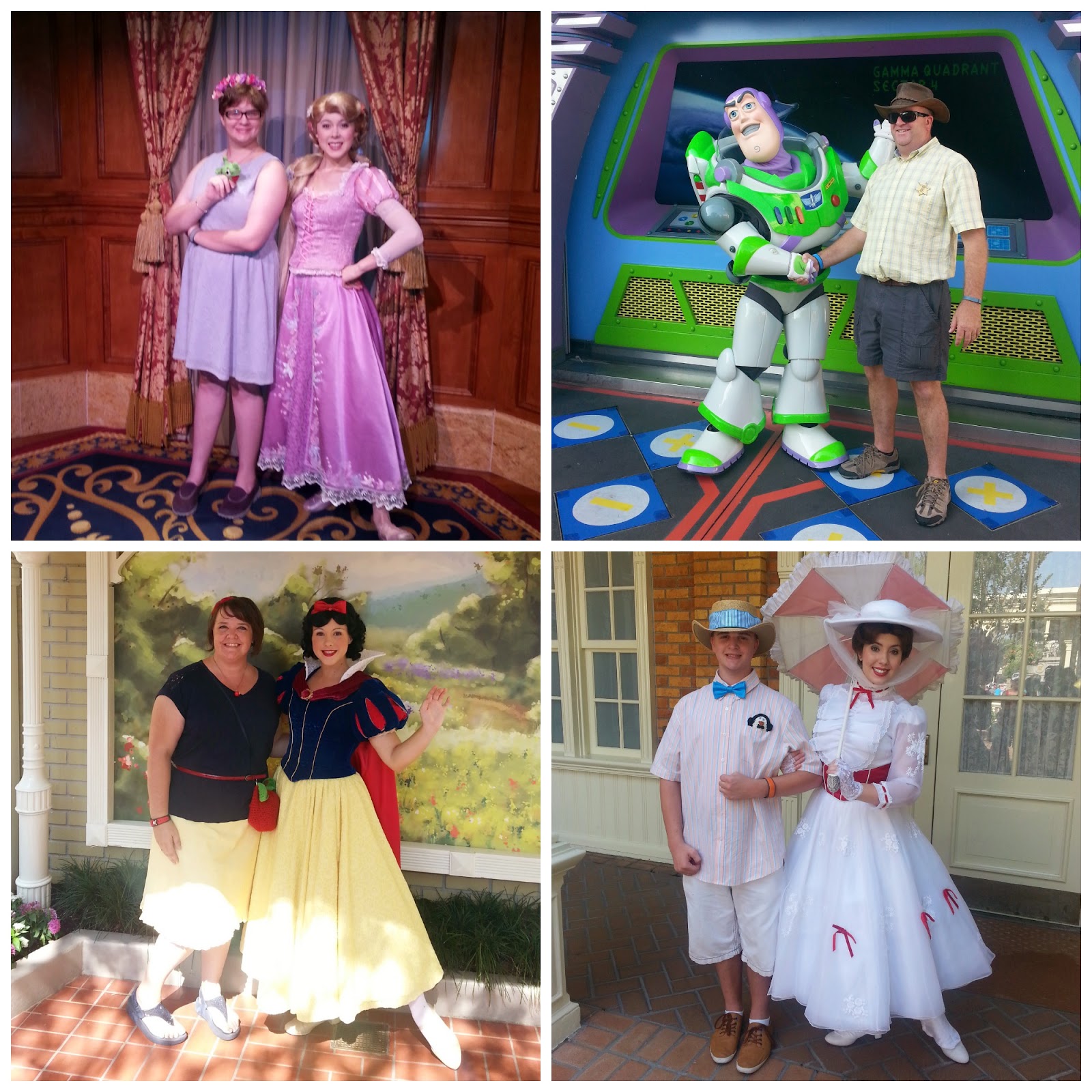 Thinking about/creating the costumes was certainly a factor in my sleepless nights!  But it was great fun... and I knew that if we didn't dress up, we would regret it!

We split the rest of our weekend between Animal Kingdom & Hollywood Studios... 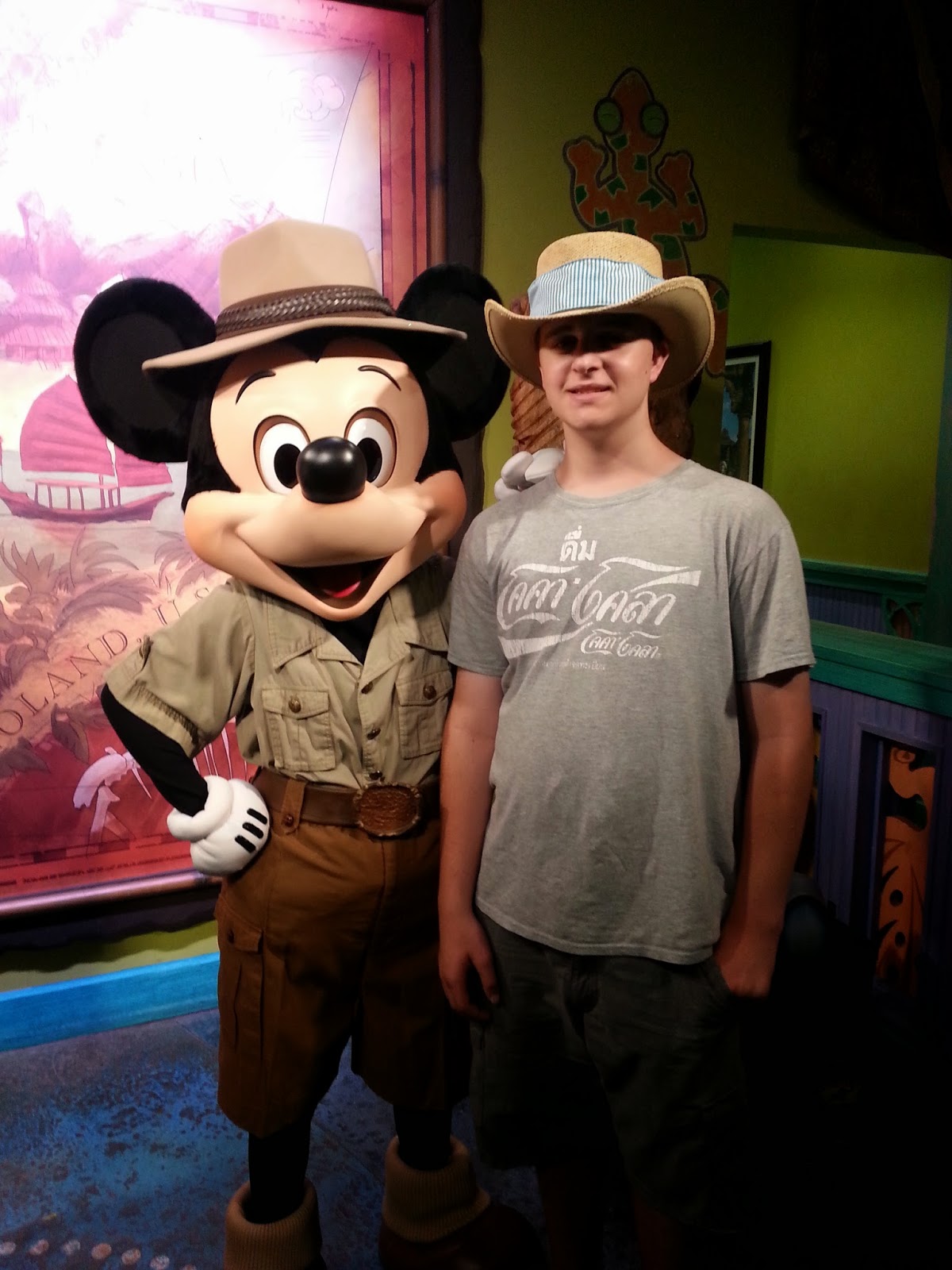 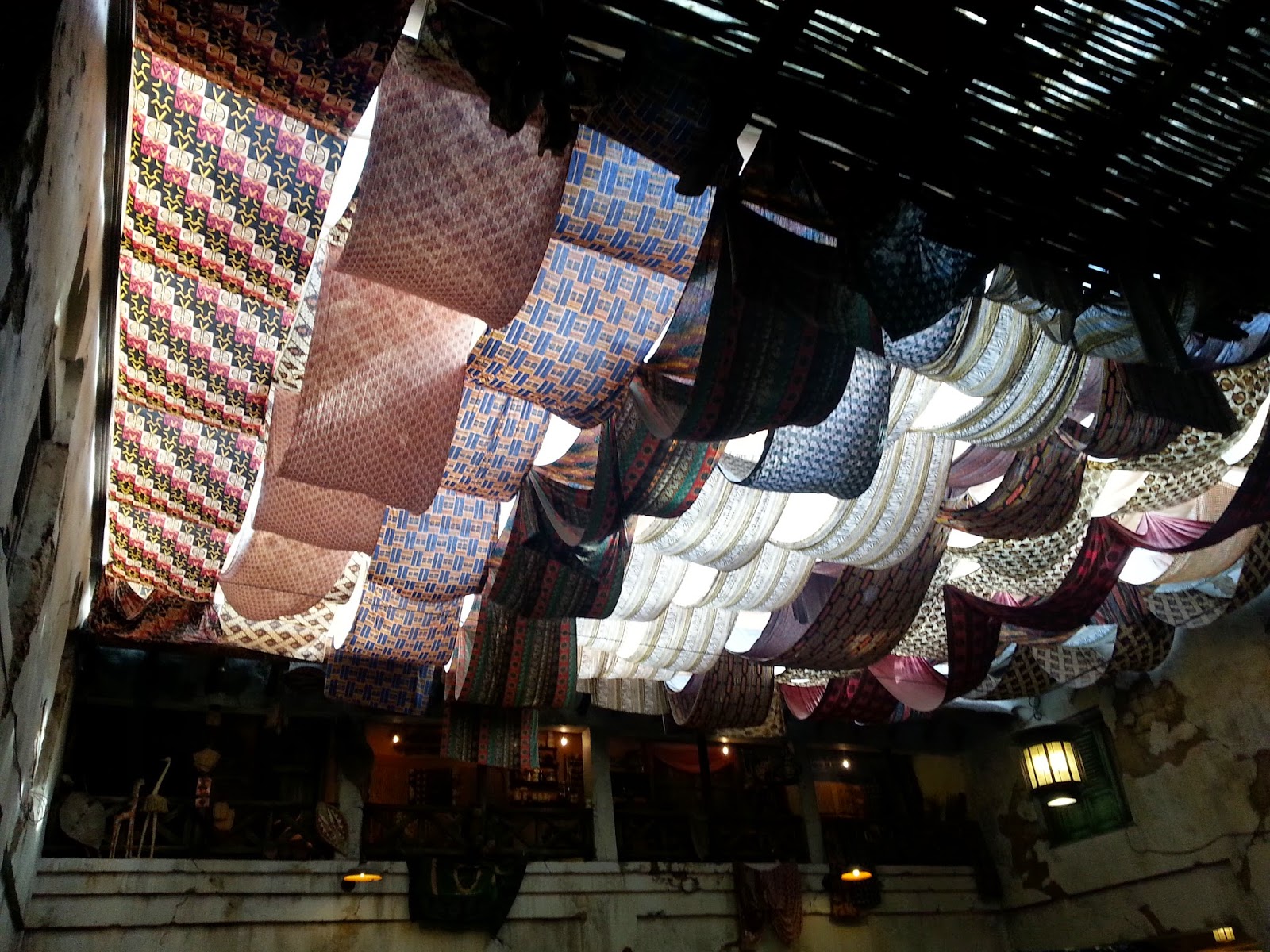 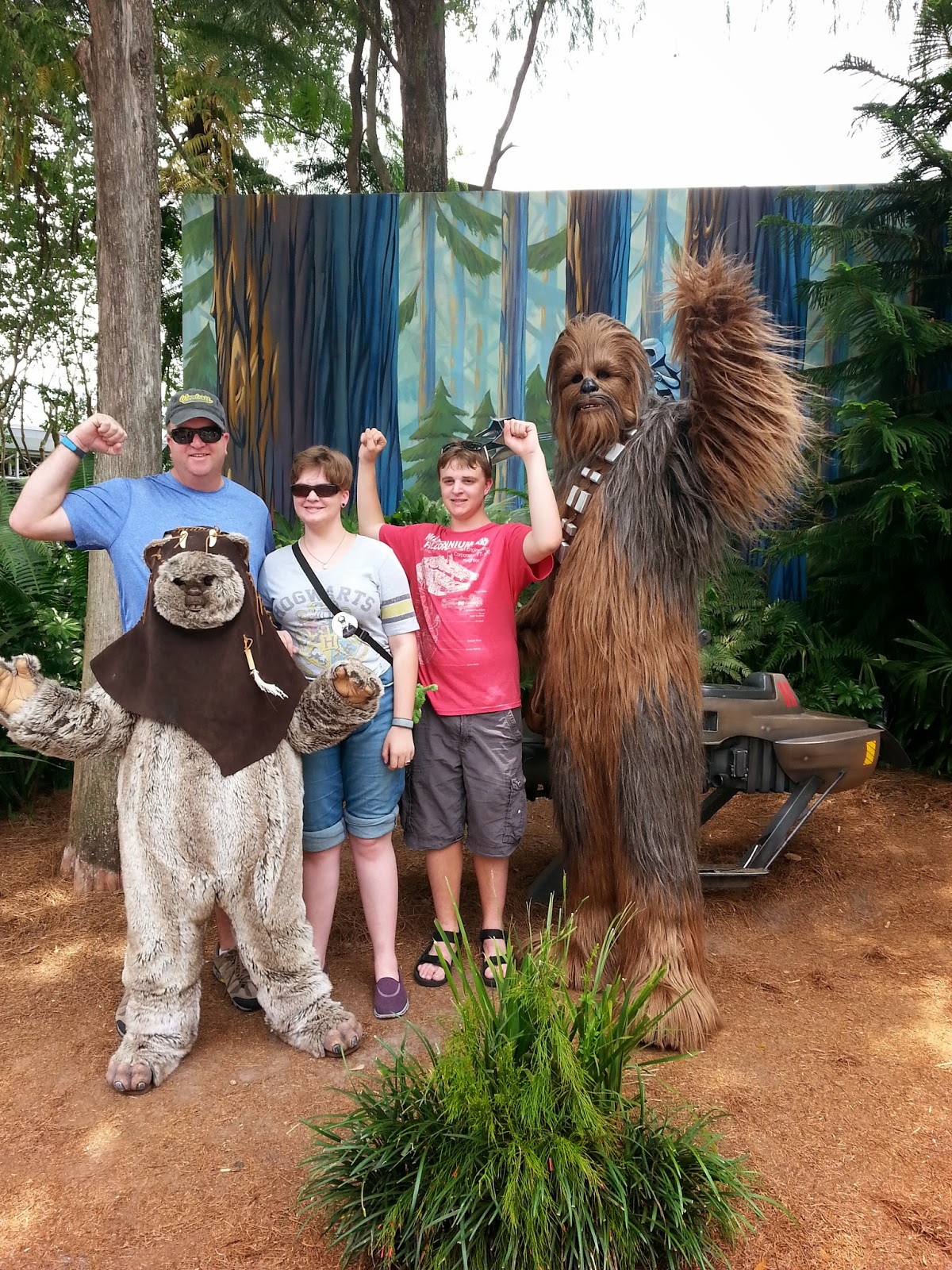 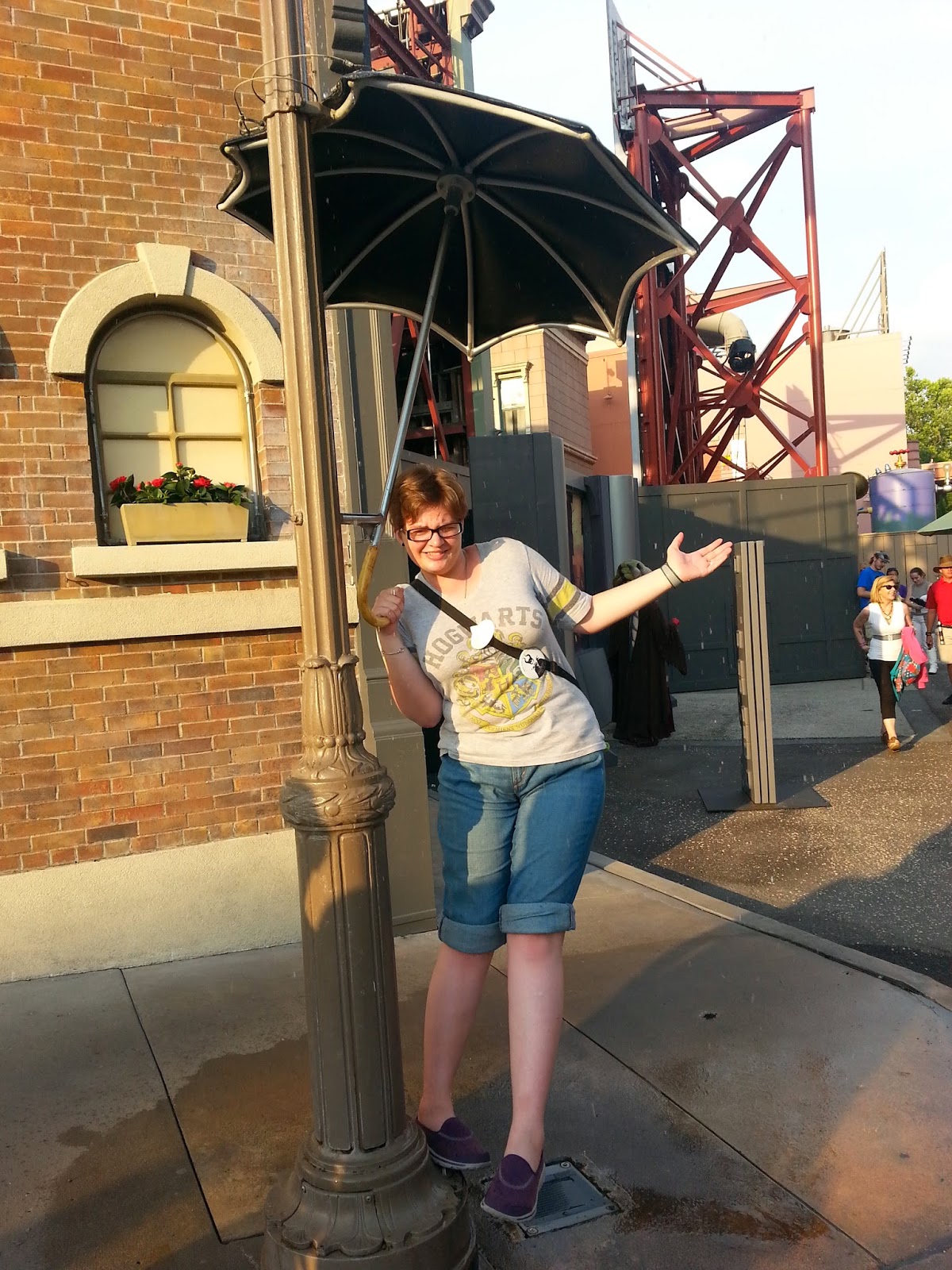 We have loved our year of Disney... letting the kid in each of us shine on through.  I don't know how long we'll be able to resist going back, but until then, we'll carry the magic in our hearts. 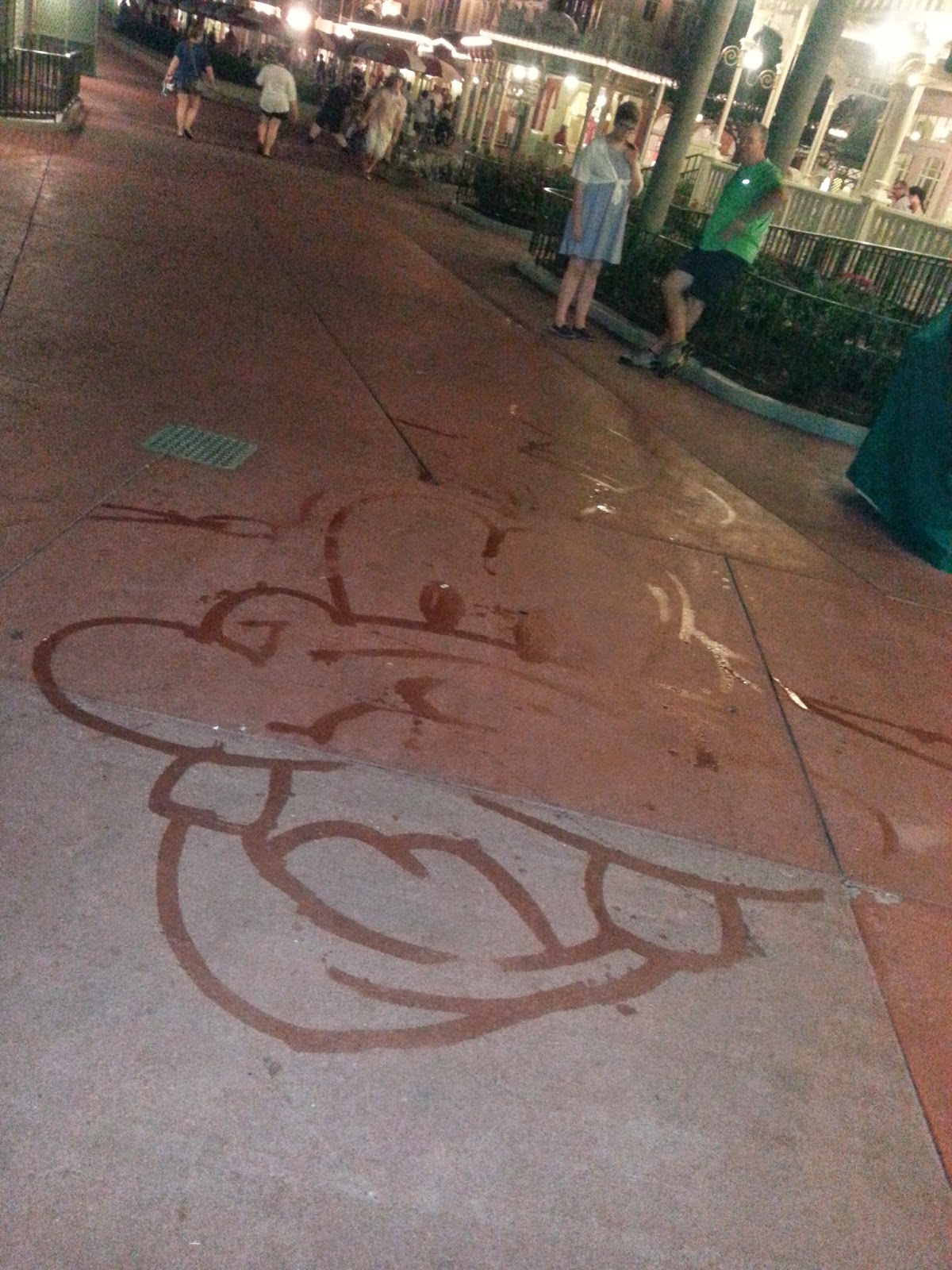 when the storm clouds roll in...

One piece crumbling after the last, each piece feeling heavier than the whole.
Perceived or real... it hurts just the same.  Your field of vision so cluttered with fear and tears and hurt that you can no longer see hope shining through.. 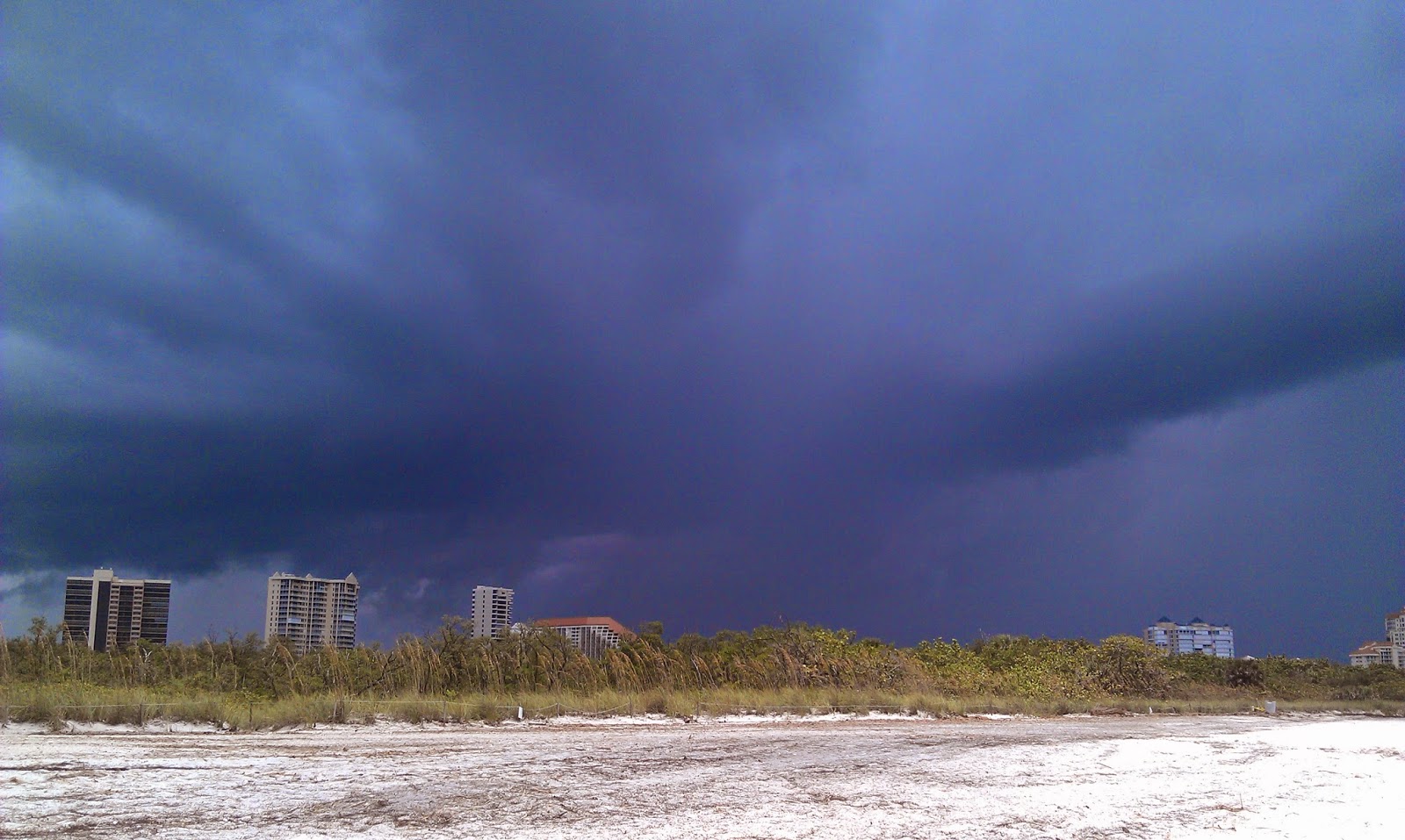 It is a season.
And while I have declared that the teen years are amazing, they can also be hard.  Parenting each one just the way they need to be parented, all the while pushing our own broken hearts out of the picture so that we can focus on theirs.  Perhaps hard is an understatement.

But hope, while we cannot see it, is there.  Here.  Because not only is our hope in God, our hope is God. Even when you yell through your tears I hate this, God! I hate this!  He is strong enough, big enough to handle it.  And He will carry us through... along the new path to an old dream, or to a dream all fresh and new.  He will hold us though our weariness and carry the to-do list that is burdening our hearts, until we are rested enough to take it all on once again.  And He will love us and shower us with grace every moment along the way.


That is why I tell you not to worry about everyday life—
whether you have enough food and drink, or enough clothes to wear.
Isn’t life more than food, and your body more than clothing?  Look at the birds.
They don’t plant or harvest or store food in barns, for your heavenly Father feeds them.
And aren’t you far more valuable to him than they are?
Can all your worries add a single moment to your life?
Matthew 6:25-27

making the most of every minute...

It was a beautiful weekend.  Beautiful.
Bright blue skies with fluffy clouds, and trees swaying in the wind.
And cool... which is amazing for May in southwest Florida!  We made sure to spend as many minutes outside as possible, drinking in the last of the low humidity, not sure if we'll feel this good again before November!  But I will hope... for one more weekend just like this.  Because you never know, and why not?! 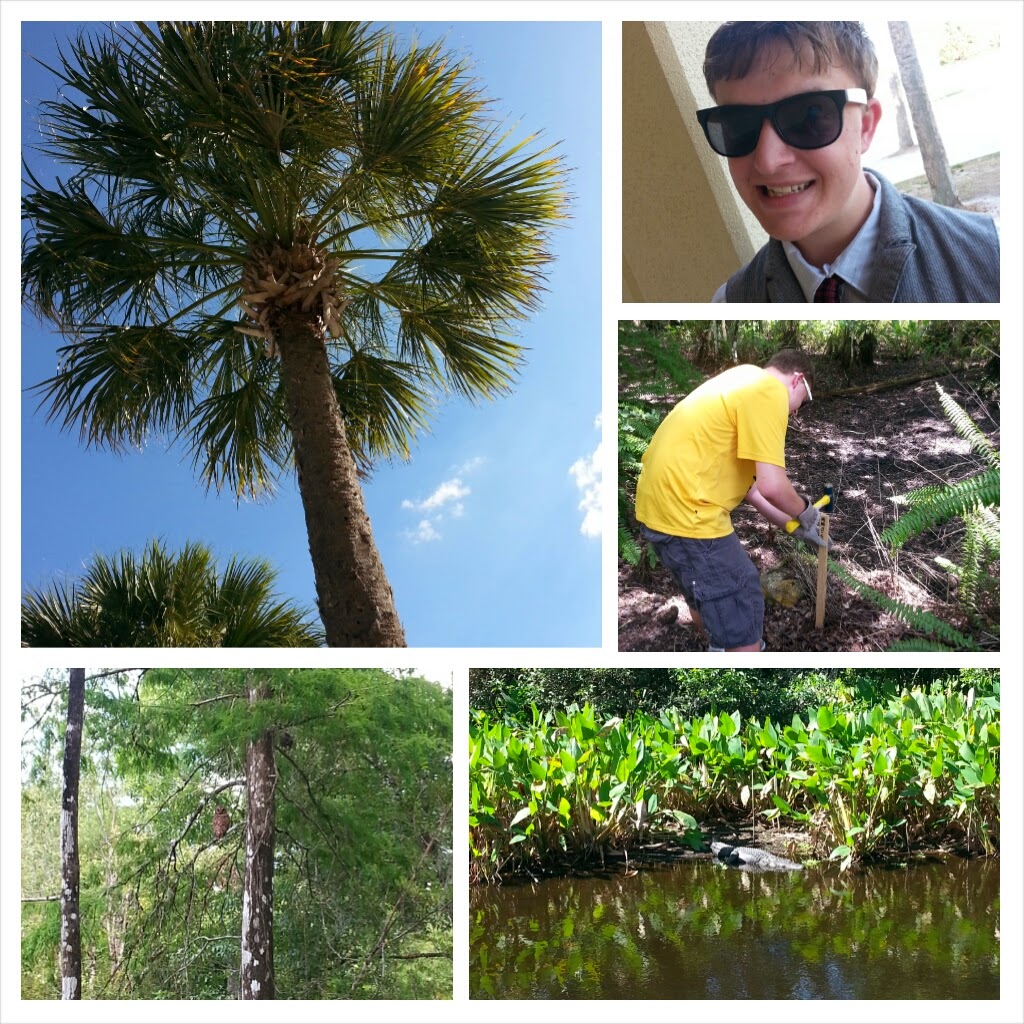 scenes from a mother's day 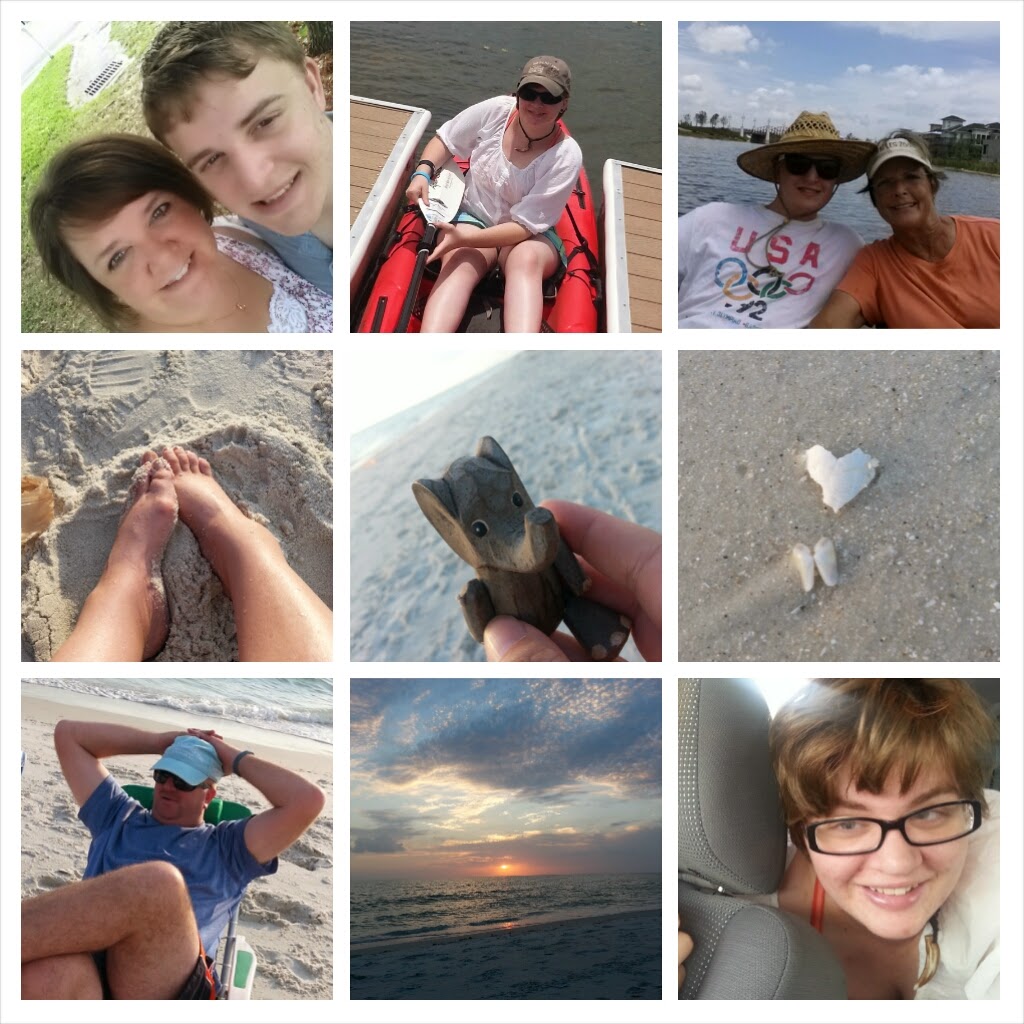 My life is beautiful... my cups overflows.

When I was little I wanted to be a teacher... but as I grew, my dream changed, and I just wanted to be a mom.  I am thankful that I get to be theirs.  It is hardly ever easy, and these past weeks have stretched my heart towards the breaking point, and maybe past it.  But it is always worth it.  Always worth being continually amazed by these children who have grown taller than me... by their kindness, their faith, and the way they see & tackle the world.  It seems that I learn as much from them as they have learned from me.

Last night, when I dug my toes into the cool sand after such a beautiful day, I exhaled, letting the heavy stuff move on.  It is necessary... to make room for all the grace and love just waiting to move in. 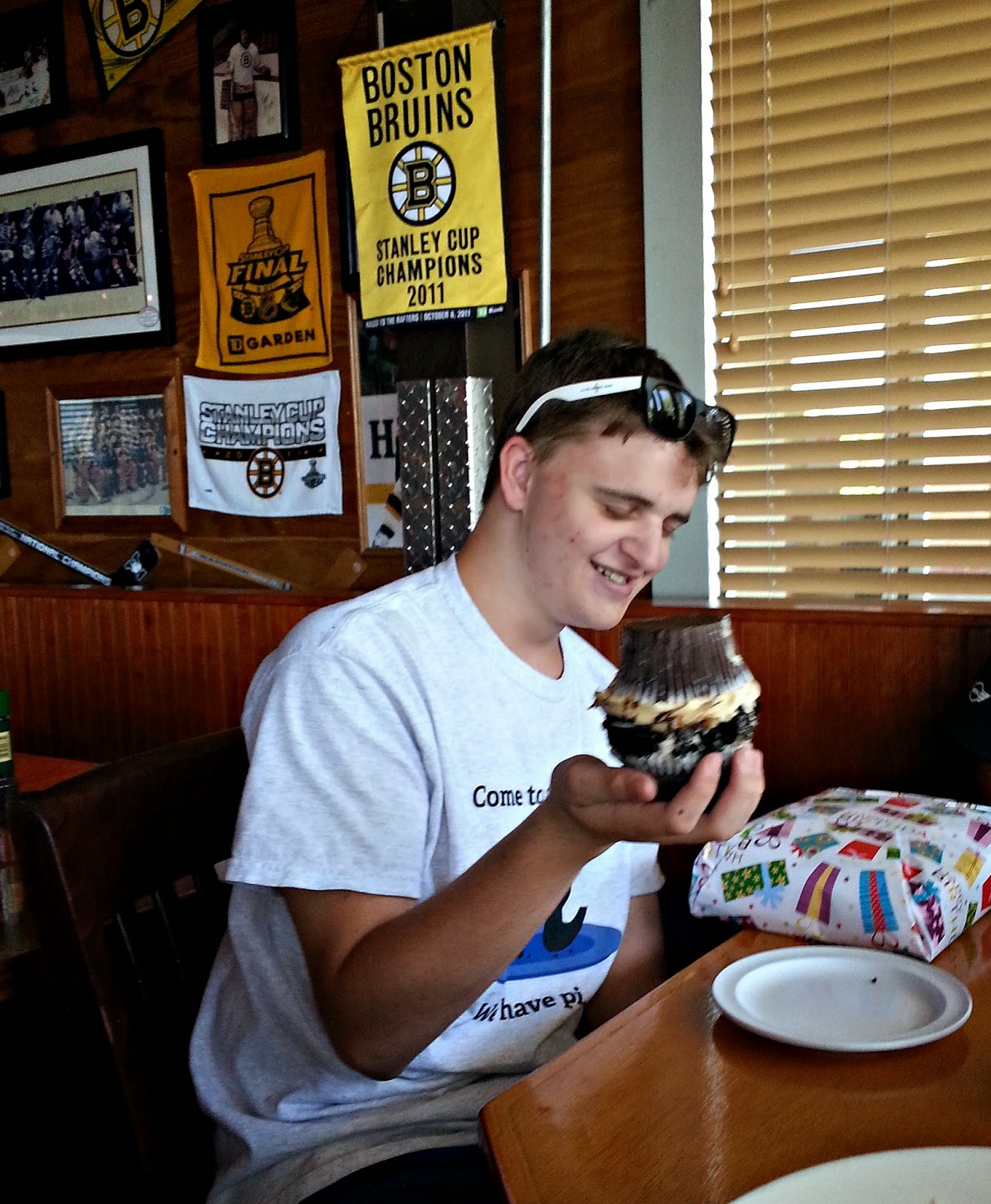 He said he didn't think she would do it, but Camden should have known that with a Gramma like his, and an extra cupcake, that this was right up her alley of fun!

Spring break was spent filling out his Eagle Scout project proposal.  It was a lot of work, many revisions. We cheered right along with him when it was approved so quickly- the work he put in up front had paid off. This weekend, we walked beside him as he took another step... a pancake breakfast fundraiser. 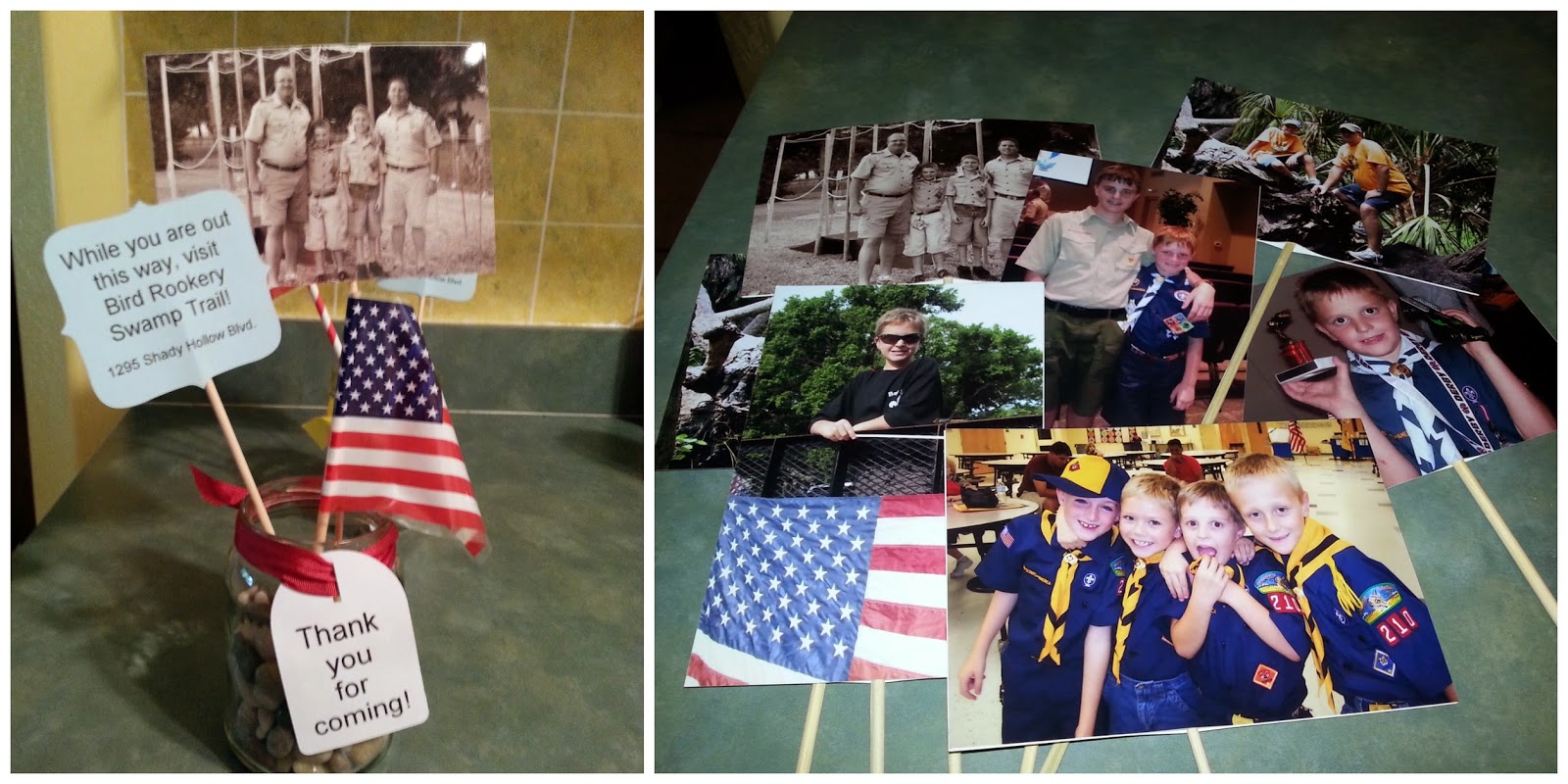 Cam followed all of the steps to get the breakfast approved, made lists of what we needed, and even went out and asked for donations.  He persevered, and finally someone told him yes, and handed him a $30 gift card... and my sister earned a great big hug for getting a donation from someone she knows.  We did our last shopping Thursday night, and coached him through his final plan for Saturday morning.

When Saturday morning came, I could tell he was finally nervous.  After taking a moment to pray, and take a deep breath, he looked a little more confident.  And when he stood up in front of all of his volunteers and started directing, he amazed me. 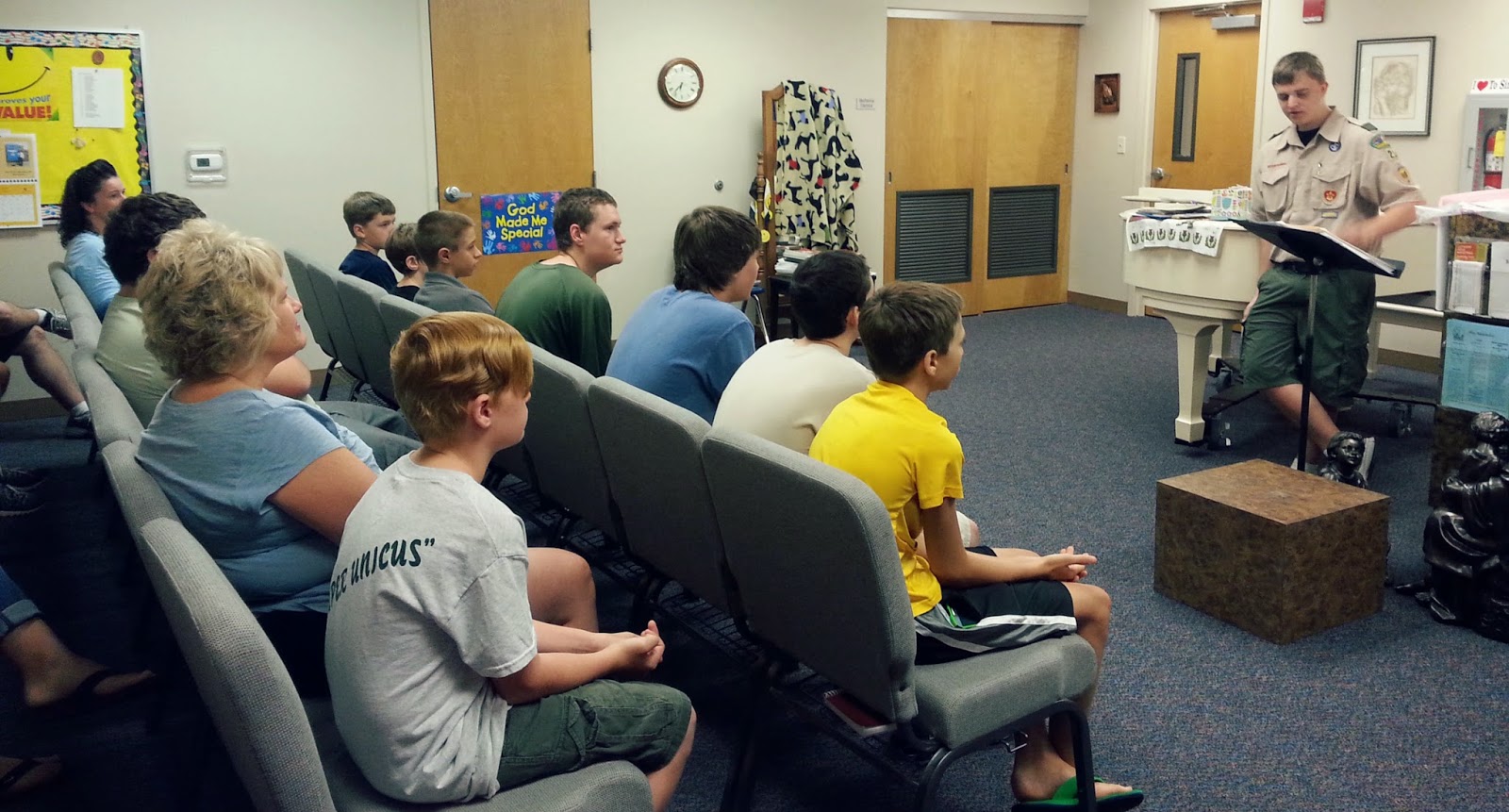 Pancakes were flipped and enjoyed by family, friends, and scouts from all over the county. Camden shook hands, thanked people for coming, and took time to talk to people about his upcoming project.  He offered more juice, bussed a few plates, and directed his volunteers all at once.  And when it was done, and his scout-mates finally sat down to eat their pancakes, he started the cycle all over again. All on his own, he made sure he was the last to eat. 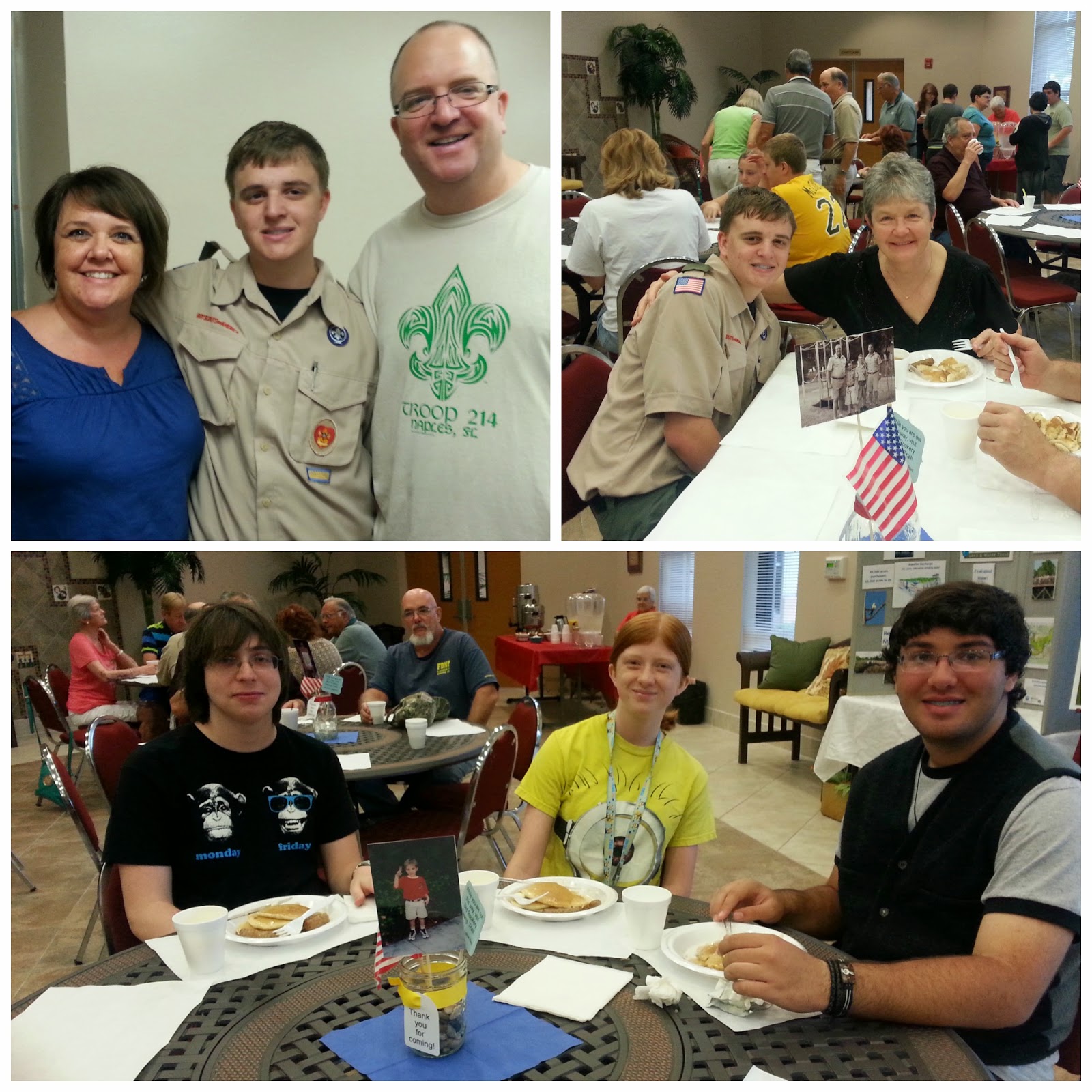 I knew he would be great... even, amazing.  But to see it play out before my eyes was all-together different. All of the hopes and the maybes were in the past... and the reality of who he is, the man he is growing to be, is as plain as day.  It was a sweet thing that his Aunt Pam wrote in a card to him... from the first time I met you, I knew you were destined for greatness.  It touched my heart... and I know it touched his.  Probably gave him a little extra confidence to go on.  I am so thankful that I get to be his mother...

Soon he'll start making progress on his actual project... and we are beyond excited to see how it all plays out!

a weary kind of wonderful... 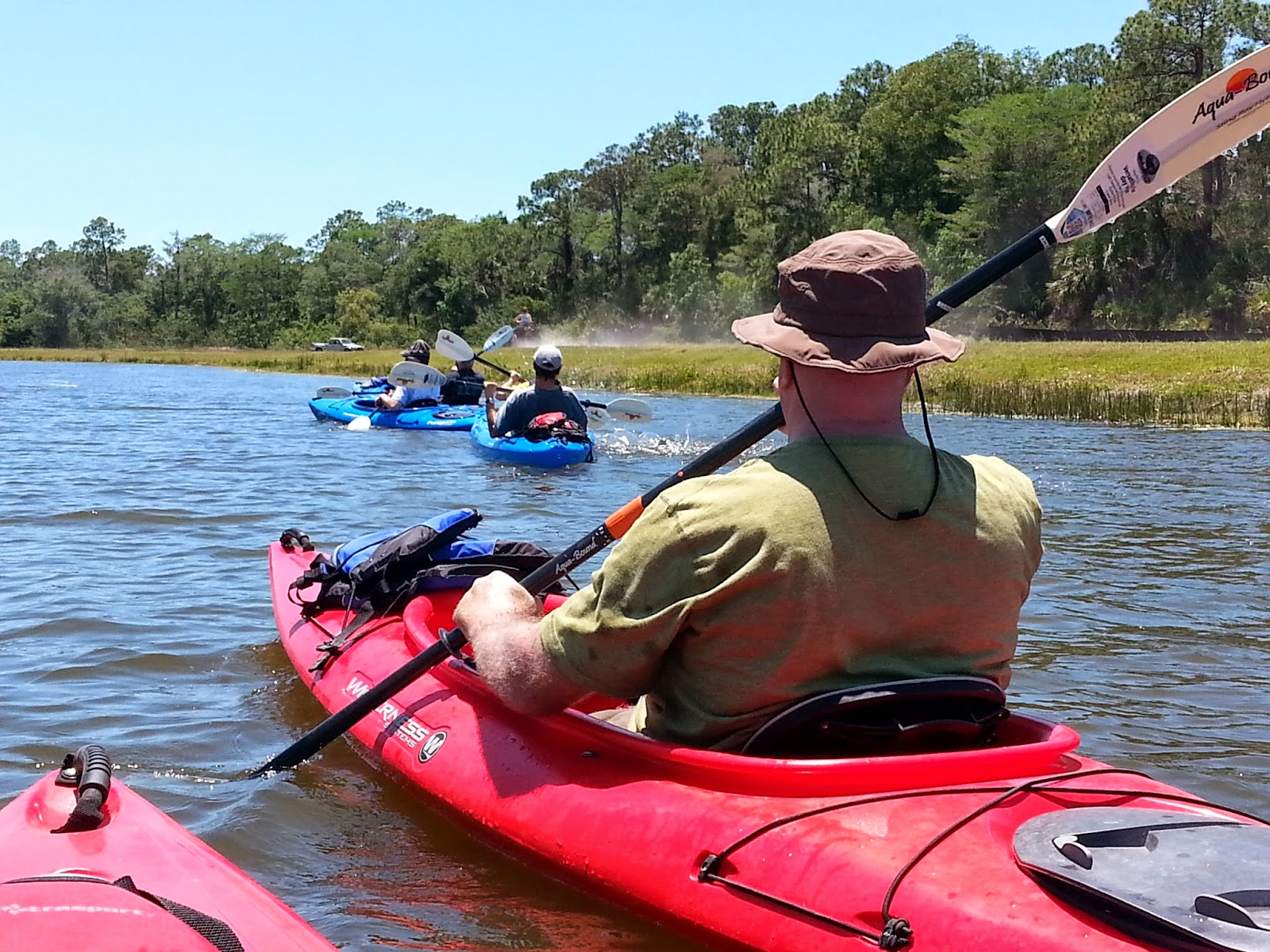 We had the kind of weekend that ends with finally putting your feet up and watching tv, and letting a satisfied sigh slip out into the room.  It was three days of good, sprinkled with lots of things and people we love.  I only felt bad that last night, when Cam finally got home from the last event, that there was still homework to be done.  His weary eyes spoke volumes though, and we sent him off to bed, hoping that he would be fresher with an early morning wake-up call.  I think that most of it got done...

More weekend news to come, but for now... a few moments I am counting as gifts...
-a weeknight movie night {you cannot resist for $1}
-laughing with friends, and knowing WHY your son loved the LEGO movie so much
-shopping, done
-a plan, ready to be put into action
-a free concert in the park,
-and a storm coming through, telling us to go home and go to bed
-an early morning prayer
-a successful event
-his pocket full of money
-an invitation to celebrate a retirement
-making time to go to the high school play
-an early dinner with cam... good food & conversation
-a beautiful, BEAUTIFUL day, after the rain
-being able to laugh over a misunderstanding
-cupcakes
-laughter & splashing in the distance
-tacos {and a tamale!} on quatro de mayo {the day before cinco de mayo}