By the time we were done celebrating, I had made four birthday cakes.  Not fancy, just delicious. And since he had to go gluten-free over a year ago, the delicious has not been taken for granted. But before there was dessert, there was dinner. {Which... in my house, is also not taken for granted. Sometimes you just have to have dessert first.}

We thought and planned for days. And when we finally decided, we shopped together for his Italian birthday feast. There would be ten around the table, but I still thought I could find a way to make it beautiful, fun and easy. I am always happy to be the worker bee at a party {even yours!} but after sharing a meal with friends a few months ago, I learned a new technique that had me sitting and enjoying the appetizer hour instead of running crazy. 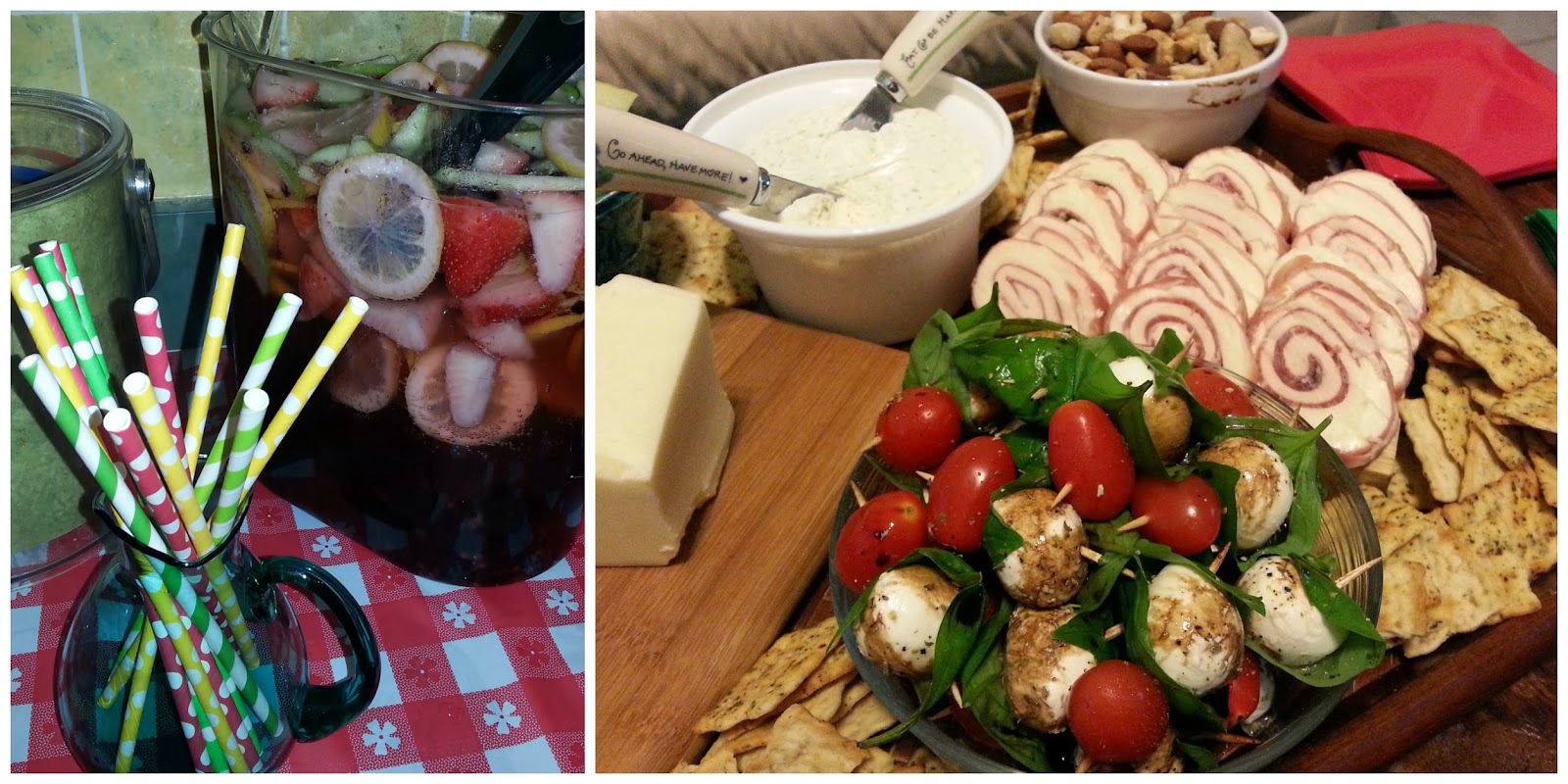 Sangria, with and without, and a beautiful tray, heavy with delicious snacks. I actually sat and enjoyed our company while I hostessed, and it was really lovely.  The only time I was running in the kitchen was to cook up spaghetti and add the salad and bread to the table.  It might be our go-to dinner party from now on... 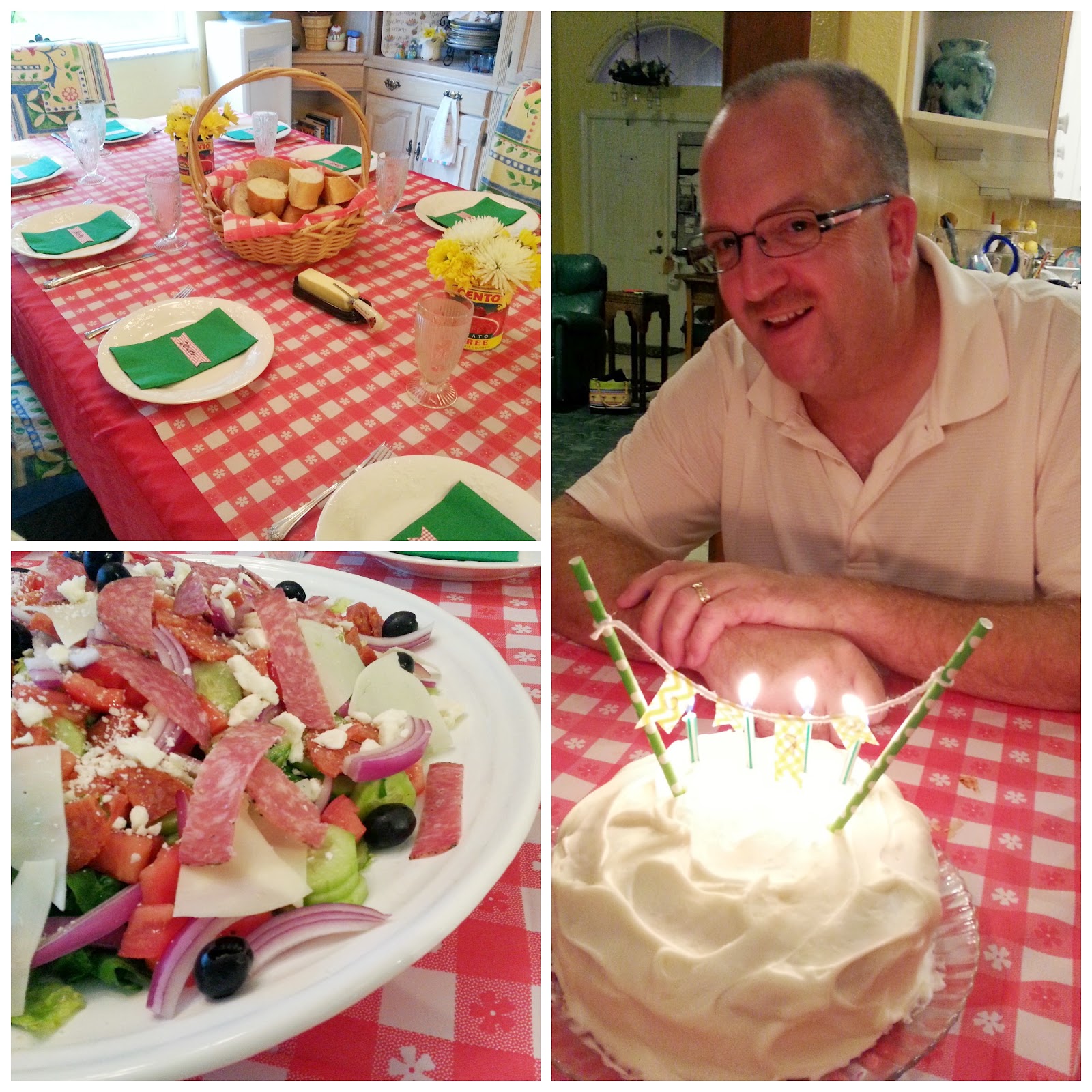 And then, there was dessert. His favorite: strawberry cake with cream cheese frosting. I had every confidence in the Cake Mix Doctor and was thrilled when I found a gluten-free version, but when I took the pans out of the oven and slivered off a taste, I wavered. And made a classic yellow cake with chocolate butter cream just in case. But what if they were both inedible? We had made a spumoni ice cream cake and we'd stretch that for all of dessert instead of serving it with the cake.  It turned out that all three desserts were a hit, and there was more than enough for everyone to try everything!

More important than dessert though?
Laughter. And there was a lot of it around the table.  That is what happens when you celebrate with your family, and friends-who-might-as-well-be-family. Laughter that spills into evening, and then some. Because before the night was over I had two men setting up a six person tent {his birthday gift!} in my living room. And then there was more laughter as they moved the furniture out of the way, and then pushed it back more, and then just a little more. We were also timing them, because it is an insta-tent that is supposed to go up in one minute. They may have finished almost three minutes over the time, but it was their first time, and we had finished up dessert with a little limoncello.

All in all, it was a wonderful night, and I am always so thankful to celebrate this man who has provided such a beautiful life.

Oh. Were you wondering about cake #4?  Boston Cream Pie cake on Sunday for his shift, as they all have July birthdays. I'm giving the Cake Mix Doctor Bakes Gluten-free three thumbs up!

beautiful from the inside out

I have seen this challenge pop up here and there in my reading... post five photos that you feel beautiful in. I haven't done it yet, but it has me thinking. About myself. About beauty. About how I am a self-proclaimed beauty-seeker and I hardly ever look my own way for that beauty.

What makes me feel beautiful?  Laughing. Accomplishing something. Celebrating. And my husband's kisses- he can melt my negative voice with just one. And... lately?  Exercise. Oh yes, that word did just roll off my keyboard. When I have finished a workout I can actually feel the sparkle in my eyes.

I like to look pretty... hair in place, make-up and just the right outfit. But I have come to learn, that looking pretty and feeling beautiful are two different things. Completely. Because I have felt more beautiful sitting in Chipotle, hot & sweaty from a beach walk, laughing with Suz... than I have all dressed up at a party.  And dancing on dusty red clay in my hiking shoes, or lending a hand to a hot air balloon crew,  fills me with a feeling of beauty far more than putting on Sunday best for church. Let me be silly, or document a moment. Those are the things that fill me with joy... and make me see the world with smiling eyes. 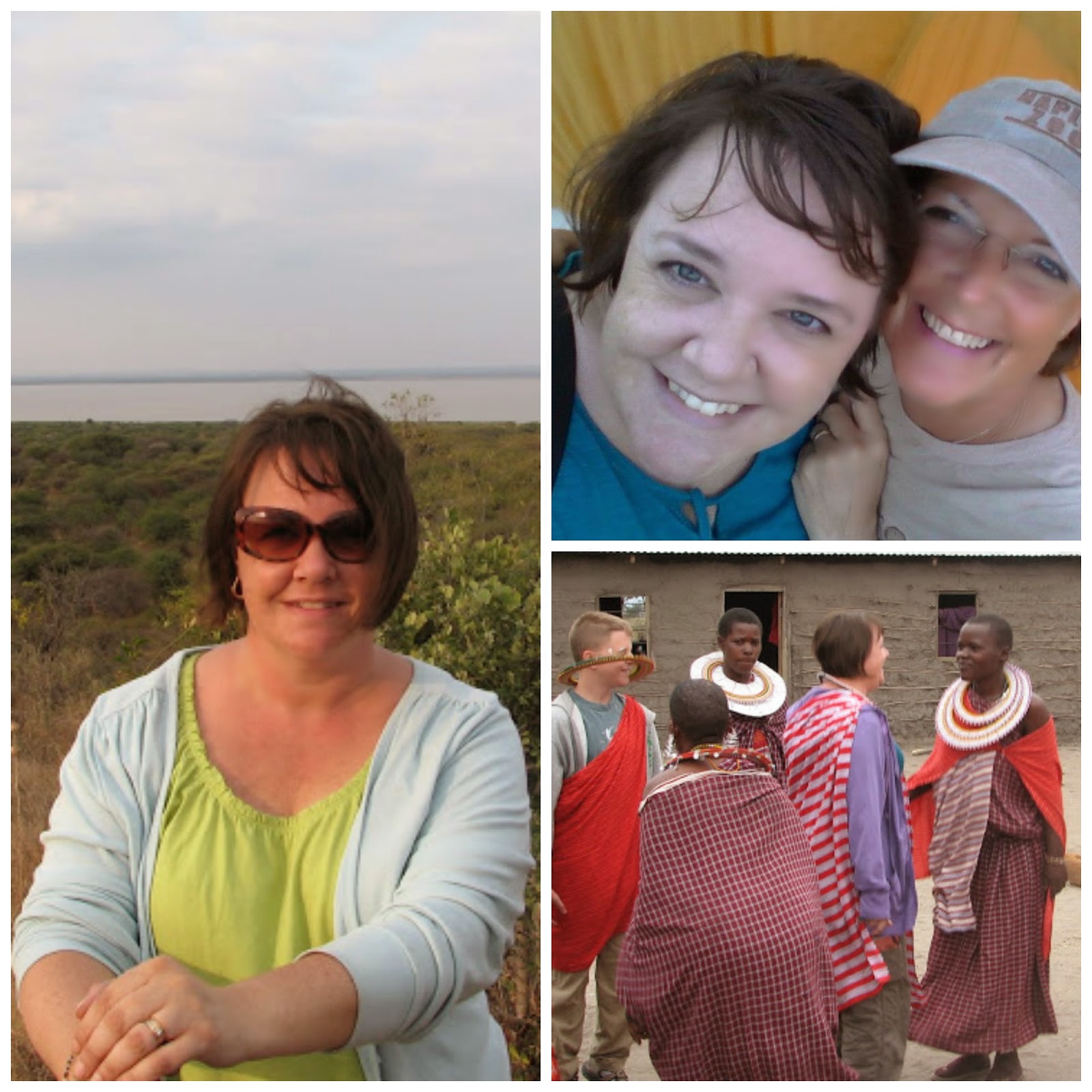 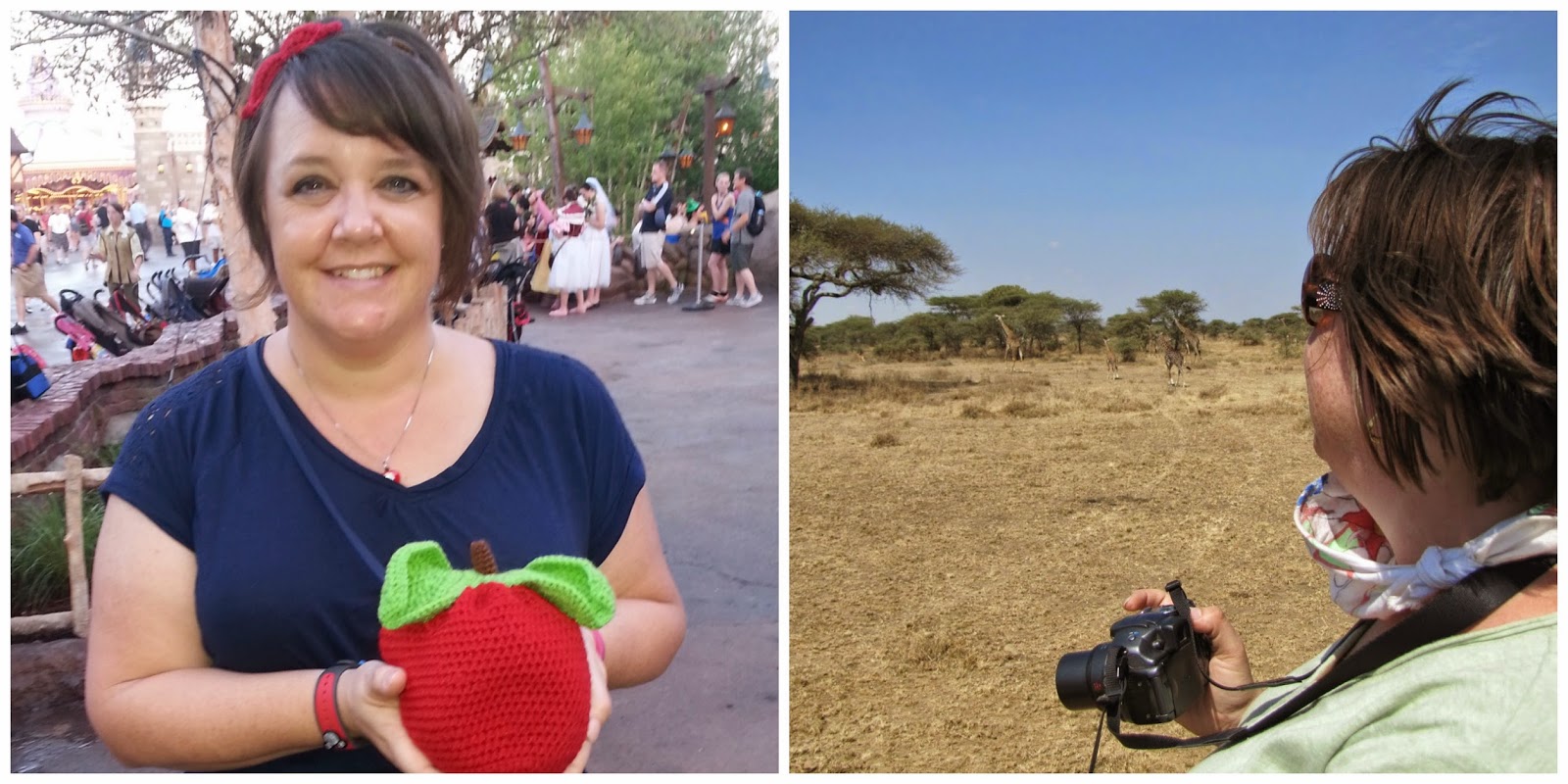 Diving in to life makes me feel beautiful.

It was a quick trip, one day up, college visits {yes. for real} and then home. The "boys" were leaving that next morning for camp and there was still laundry to be done, bags to be packed.  But that quick trip left me so refreshed that I felt like we had been gone days...

Sometimes, and for me it is usually, last minute plans work out best.
I texted her before we headed north to see if maybe she was free for lunch.  The timing was perfect.  Lynda & I had met while our husbands were deployed together in the USCG after 9/11. We shared so many prayers and phone calls, laughter & tears... and it was good to catch up. She is definitely hoping Cam chooses one of the St. Pete schools for college!

We decided that as long as we were staying overnight, we may as well choose something close to the beach... mix a little pleasure in with the business at hand!  It seemed an endless walk across the beach, but when the gulf was finally in sight, it was beautiful. For two hours I rested in the sunshine, catching the ocean breeze. I could hear thunder rolling in the distance, but the radar told me keep resting.  I needed those hours. I needed to let go and exhale... to make room for summer. 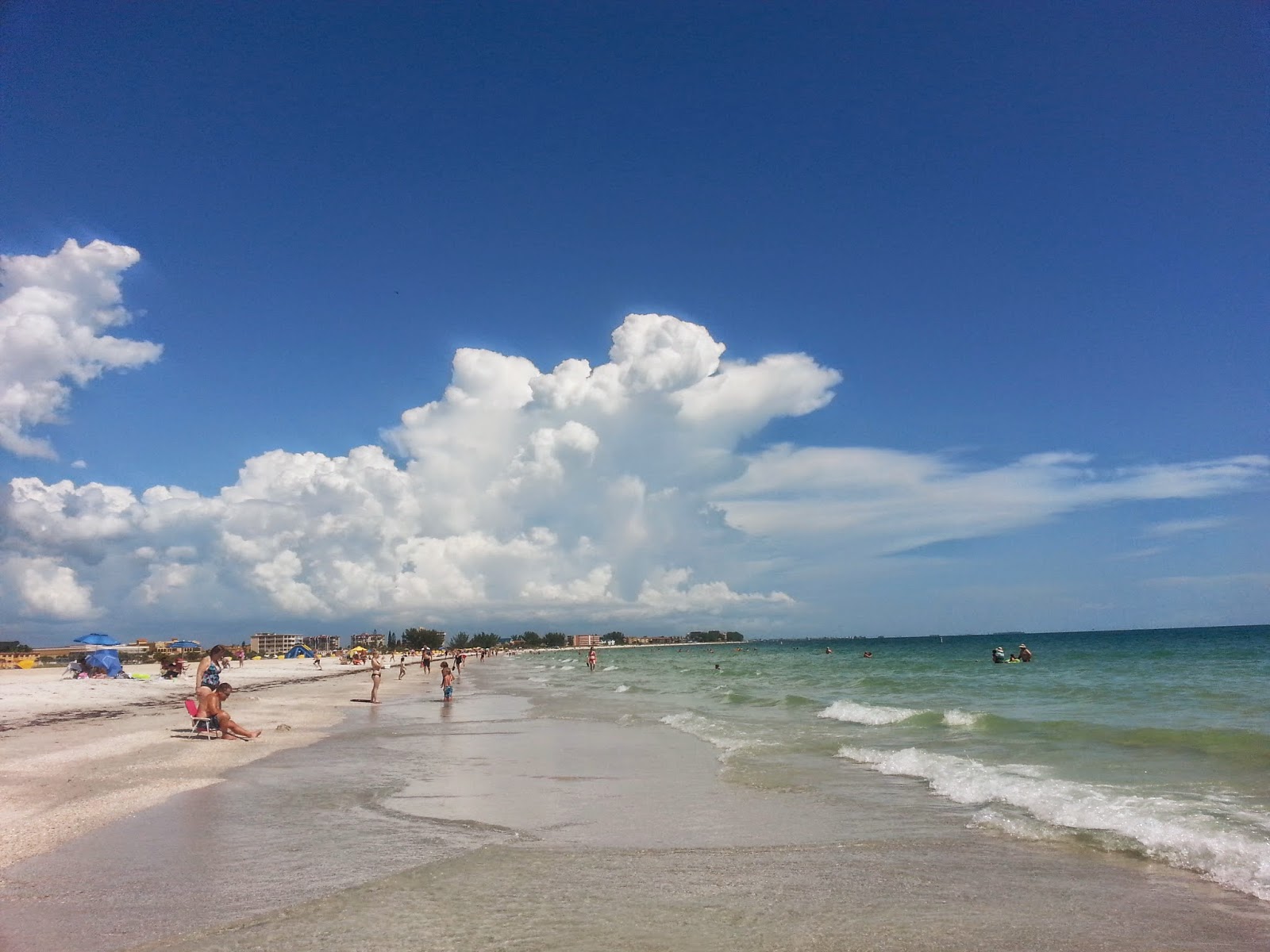 I did not want to leave the beach, even though thoughts of dinner were starting a rumbling in my stomach. I tried to work out the timing of when to eat and how long it might take... so that we'd make it back in time for sunset. We debated a great gluten-free menu and casual beach fare, and I am sure it is only his love for me that landed us at a table with a view... Live music, a gusty beach breeze and a beautiful view were only a few perks of the evening. Mostly it was the laughter at the half-round table for three, and a really great waitress who made it easy for Eric to eat.  I can hardly recall the conversations, but I know they were lively and funny and insightful. College visits speaks his age, but to sit across the table and listen to him is to realize how much he knows and where his interest lie. It is one of my favorite things about being a mom of a teenager. 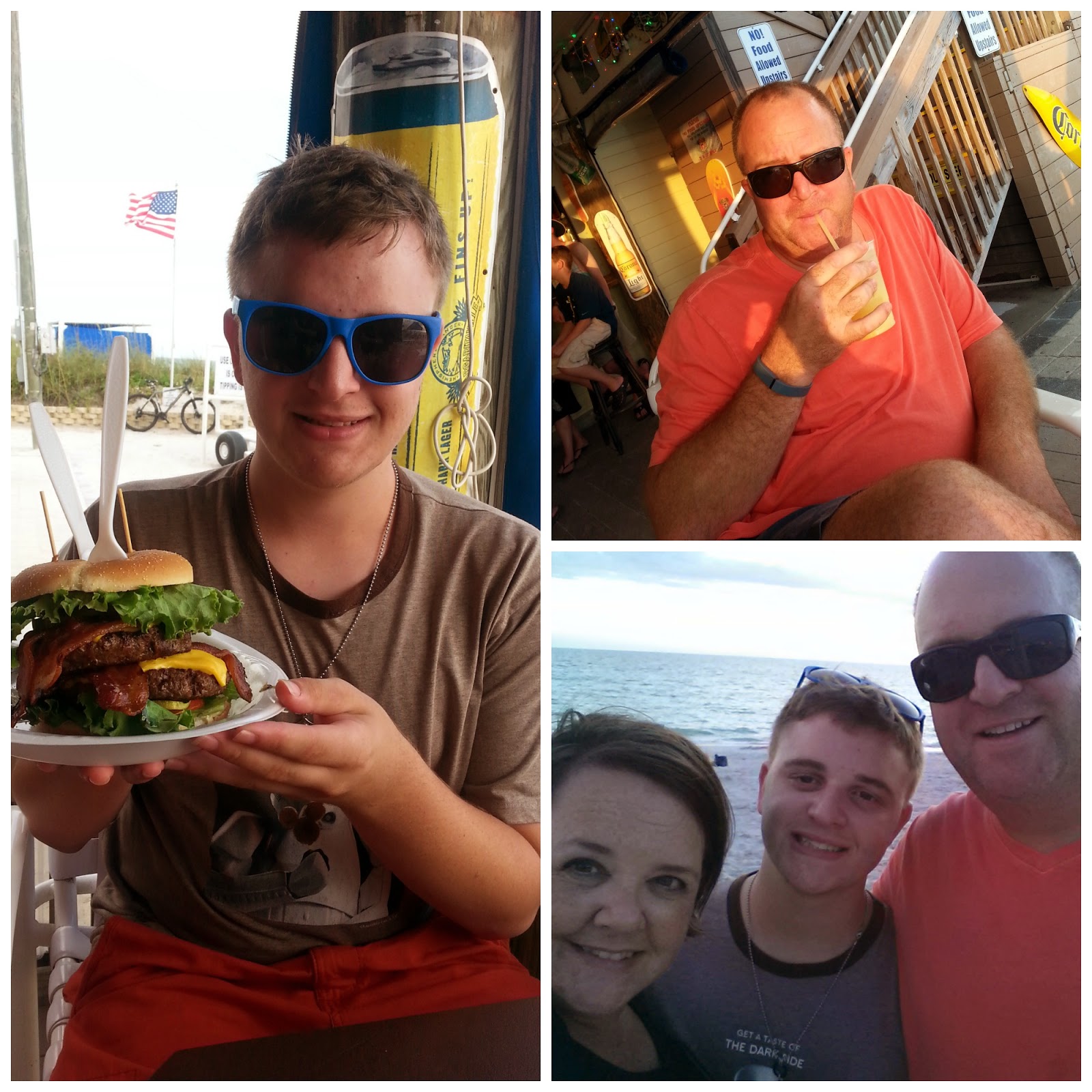 Just as we were finishing up, the thunder clouds moved in and the rain came down, spoiling the dinners of many picnickers. But we were dry... and the laughter began again as we plotted how to save our table until sunset. Dessert. Another drink. And then maybe one more, since sunset was still a few minutes off... 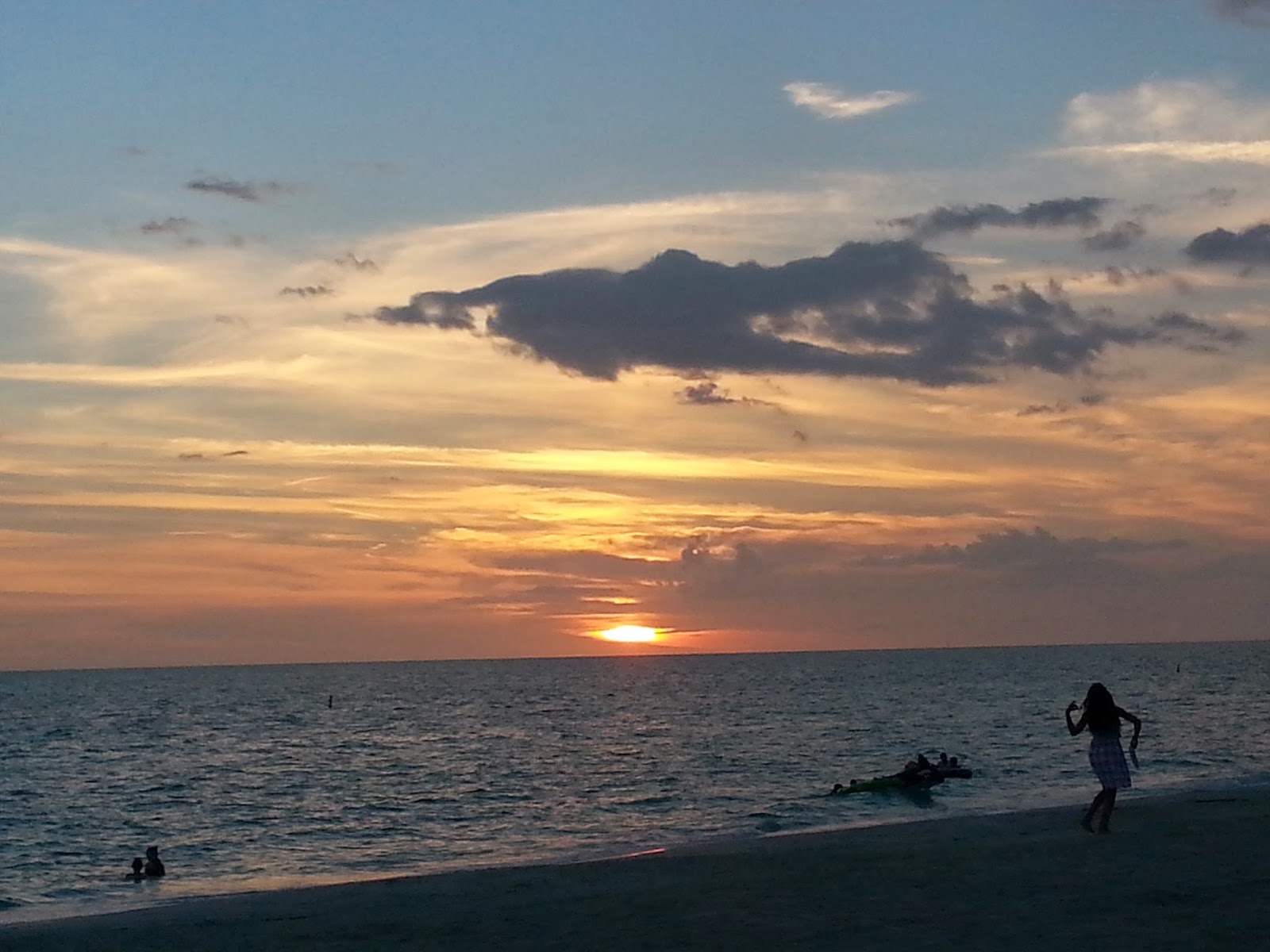 This was an evening that was so full of life... one that will set the bar for lovely nights. I will try to recreate the magic of it, but sometimes you wonder if you can really return. But what I know for sure is this... St. Pete just got at least two more college votes.

Life lately... has been busy.
Once again, I have plenty to say, but am having a hard time turning those thoughts into actual words. Or maybe, I am just excelling at procrastination. Definitely a possibility! I am hoping that some of these pictures will turn in to stories... but for now, here is my new take on life lately. 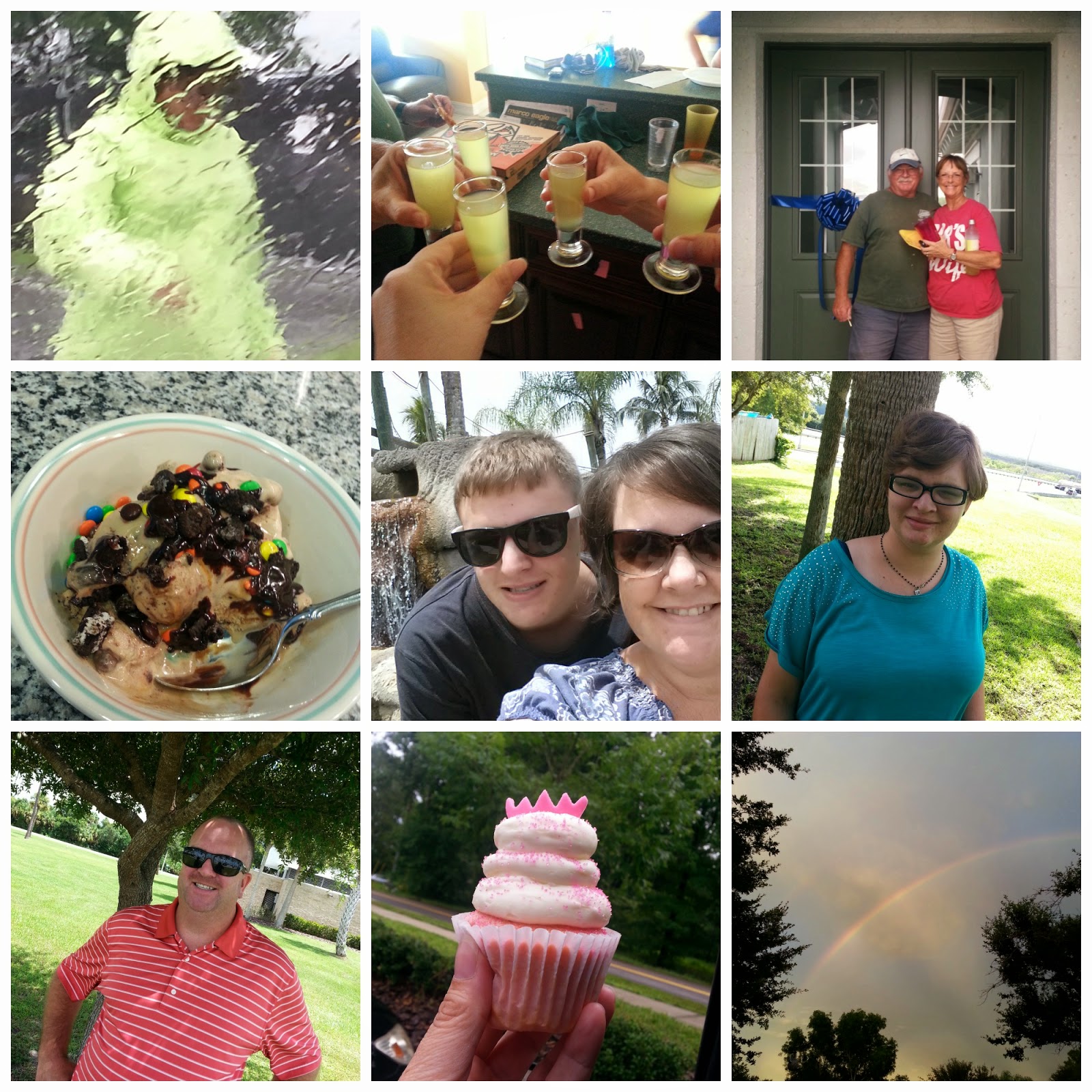 1. we have been having a lot of rain. a lot. laura was making a run for the car after work!
2. a toast... to my parent's old house & all of the memories made there
3. their new house, a new chapter. complete with a big blue bow.
4. dessert. at the new house.
5. we celebrated zipping his suitcase with a round of mini-golf. his favorite!
6. my girl. see that smile? it is because she made me walk on a snake wall. yes, really.
7. someone is having a birthday tomorrow!!! half-way between a big one and THE big one!
8. we won't be having princess cupcakes tomorrow, but i had one over the weekend and it was delicious!
9. did i mention rain? but then... this. beautiful.

What happens when part of you heart is having an adventure on the other side of the world without you?
You try to keep up as much as you can.
And stalk Facebook when the clock says they might be in the lodge for the night and can find some wifi. 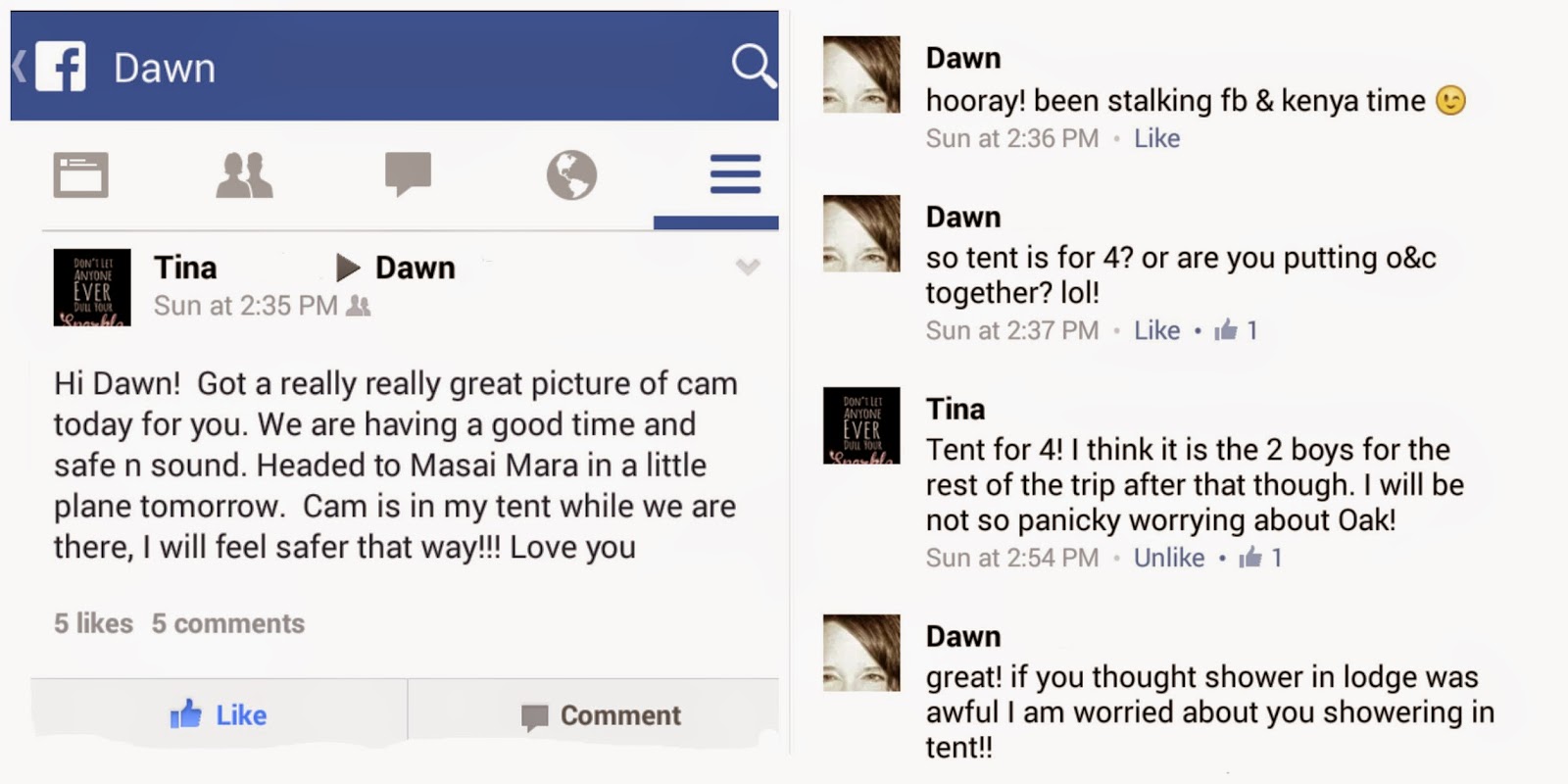 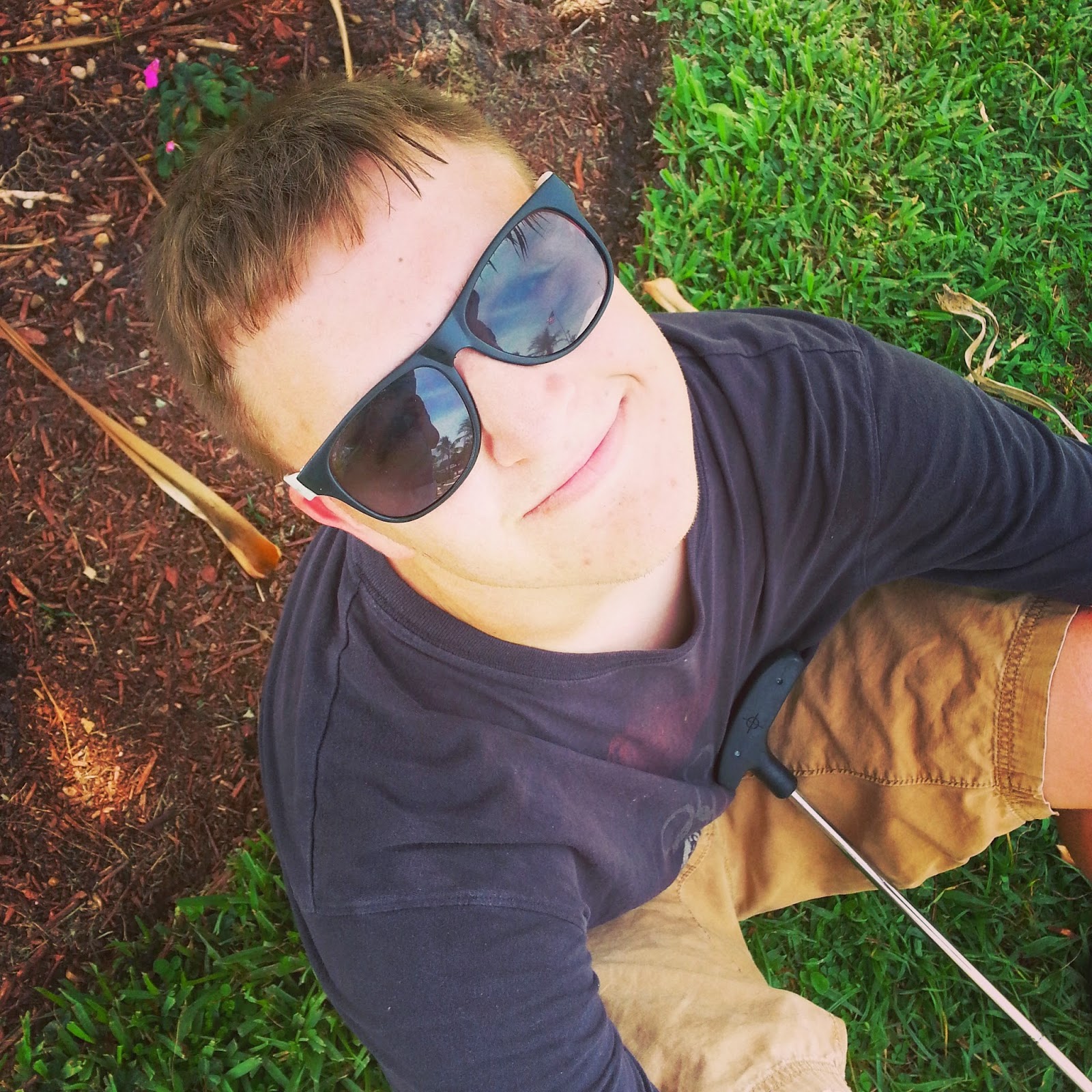 I am so excited that Camden has the chance to return to Africa.
It has been four years since we were there, and I am looking forward to hearing how his stories now compare to his memories. I hope he is travelling with his heart open wide, ready, once again to take in the world. 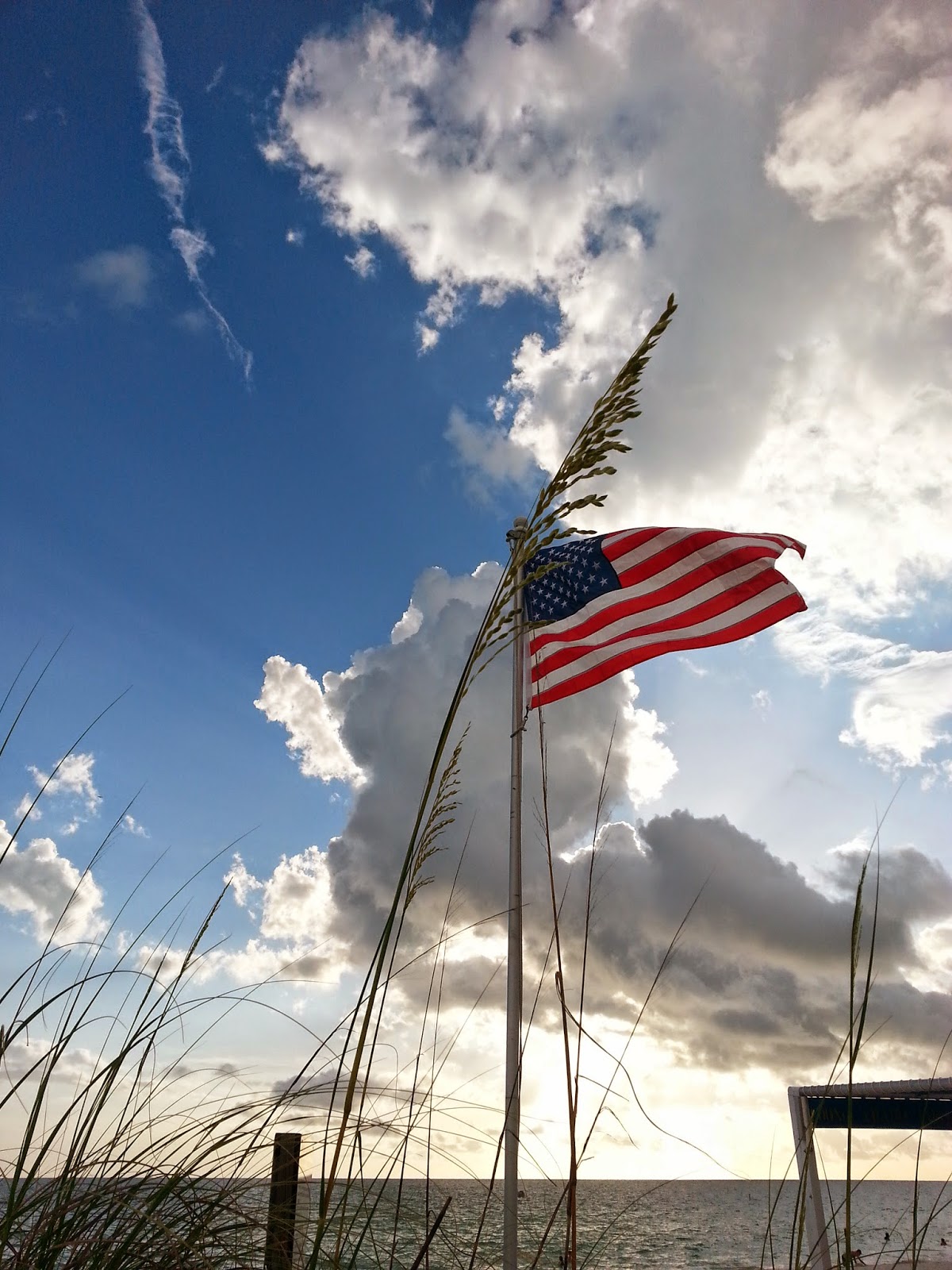 I hope your Fourth of July is spectacular!

I often feel that our greatest individual challenge is to close the gap
between our unflattering self-concepts and the truth of our magnificence.
To see ourselves through the eyes of those who love us.
-Jeff Brown 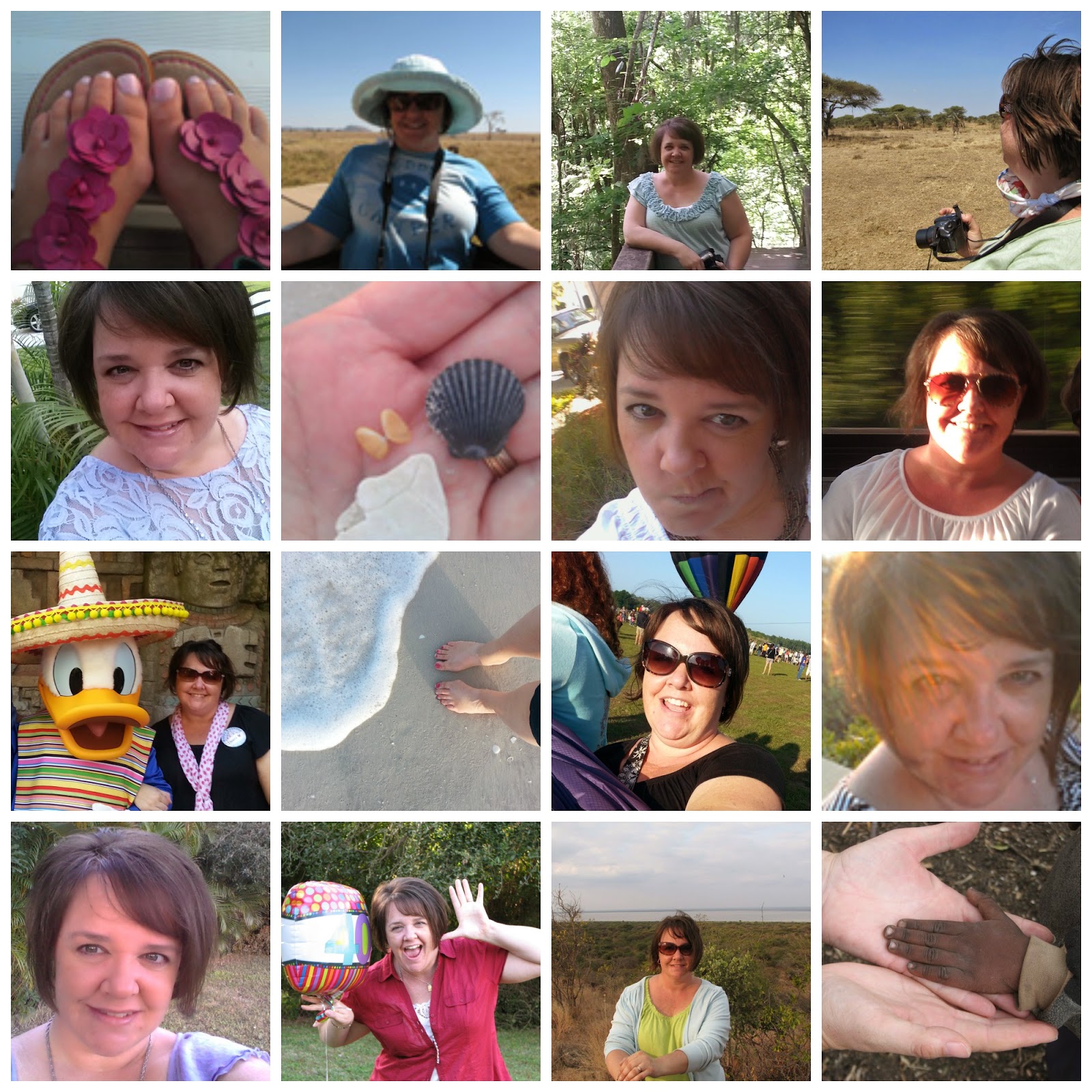 Working on it... a lot. And... I'm making progress.
For the first time in a long, long time, I am not cringing when I look in the mirror, and it doesn't set my whole day off kilter. I have been participating in an online boot camp, and although I have lost a little weight and some inches, I see the most difference on the inside.  I feel different. Energized. Motivated. Strong. Valuable.  And... I did 30 push ups this morning. Yes. Three-oh. That is 20 more than I could do nine weeks ago. I am a-changing... and I am grateful.

Today she starts her new job...


It is almost her first job- the only time she has ever been officially paid for work was a couple weeks of her volunteer camp counselling job a few summers back.  She was a really great counselor, but it was very temporary. And this time?  It is the start of her zoo career.  Her dream.  She is very excited!

This morning I had the first-day butterflies for her. I didn't ask her if she had them, too... but I am betting she did. This business of mothering never ever ends...