He is the one who, at the most unexpected times, would lean in to me and whisper his excitement about going to see the Serengeti. I would turn to him,  and see his eyes sparkling with joy and expectation, and we would count the months... again.  He is my counter... keeping tabs on the months 'til school is out, the weeks 'til camp, or the days 'til his birthday.  And when the day finally arrives, he is the most joyous... not letting anything get in the way of completely enjoying the moment.  Africa was no different... well, except that it was more. 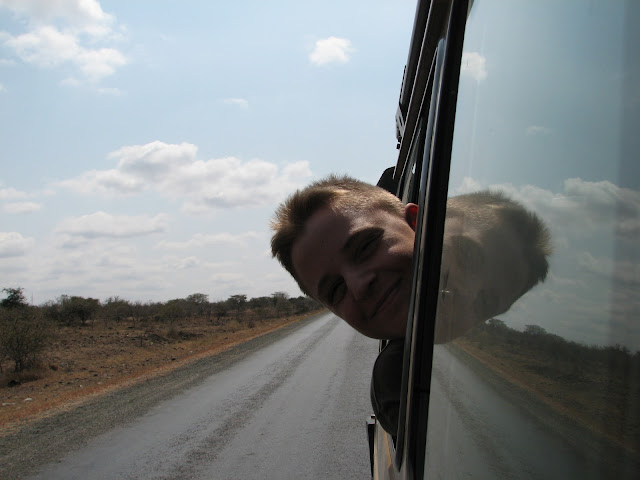 On our first day in Tanzania, when we visited Shanga... I turned to find him and he was already deeply involved in a project.  There he sat, working with two women, safety glasses perched on his nose.  Even though the ladies were both deaf, they had communicated to Cam just what to do, and there he was just clipping away at glass corners.  These women & I exchanged smiles, and I felt a swelling in my heart.  For this boy... for who he is, and how he lives. 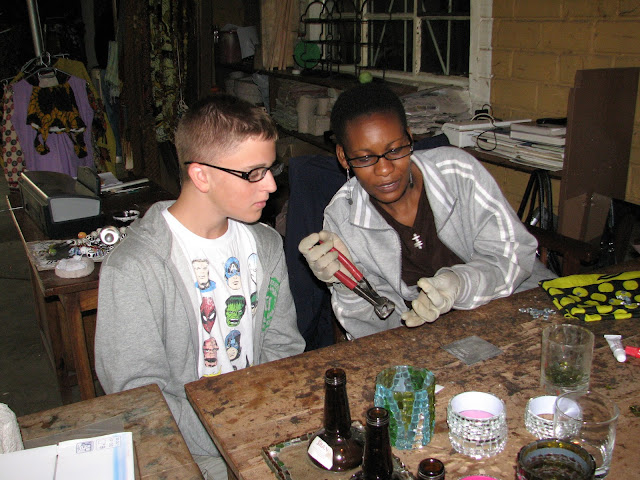 We came to Africa to see the world, and in the world, my son rose to every occasion... and amazed me at every turn.   At home, his personality shines, along with the choices he makes for his life... and somehow in Africa, it was tenfold.  He was Mr. Independent... he was our goodwill ambassador.  He made friends with everyone, everywhere... made the most of every opportunity that was offered, and even created some of his own.  Driving through the city streets, or on long dusty roads, there he was... waving to everyone who passed.  His smile was reflected in theirs as they lifted their own hands to return the hello.  In the villages, or at the lodges, Cam brought out legos or frisbees, and started up a game.  Adults, kids... it didn't matter... there was joy in all the faces. 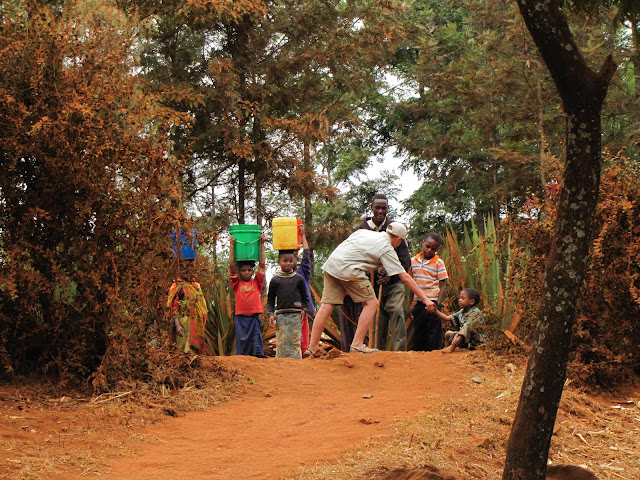 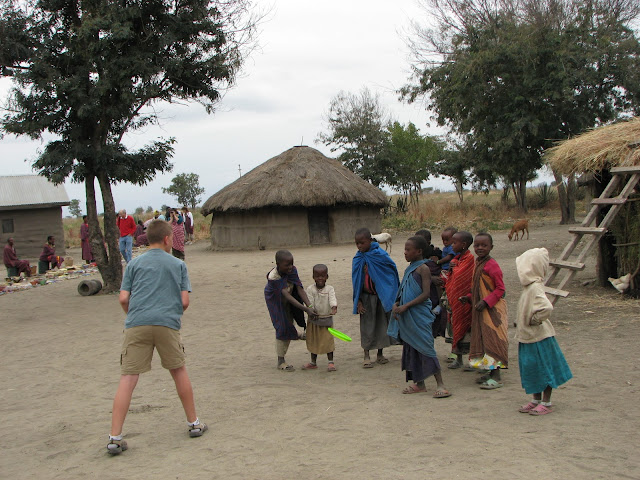 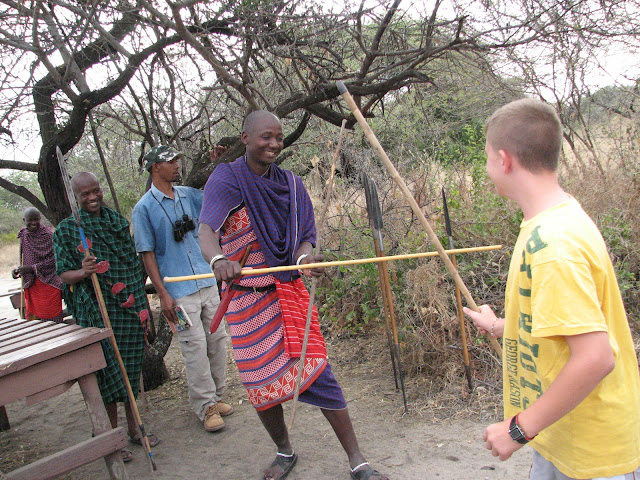 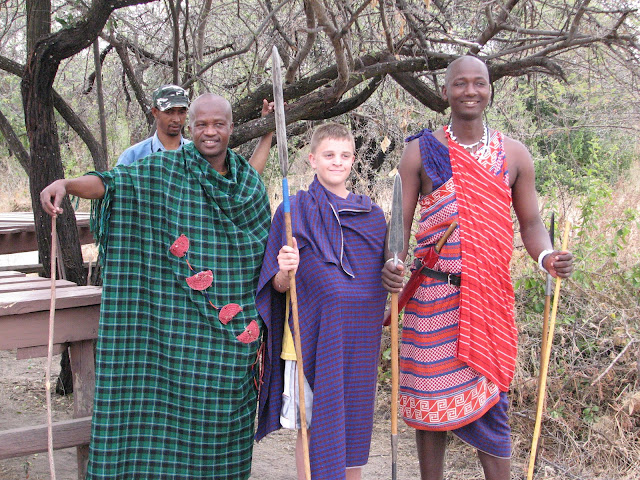 In the bag of frisbees we brought, there were also balls... and my unathletic son brought that soccer ball out every time he had the chance.  He loved kicking it around with the kids... and was in awe of the way David (our tour leader) could bounce it around, working it off his legs and knees.  Before long, there was a promise of a soccer match... and Cam became  just one of the guys at the Serengeti Camp, welcome at the worker's side of camp anytime. 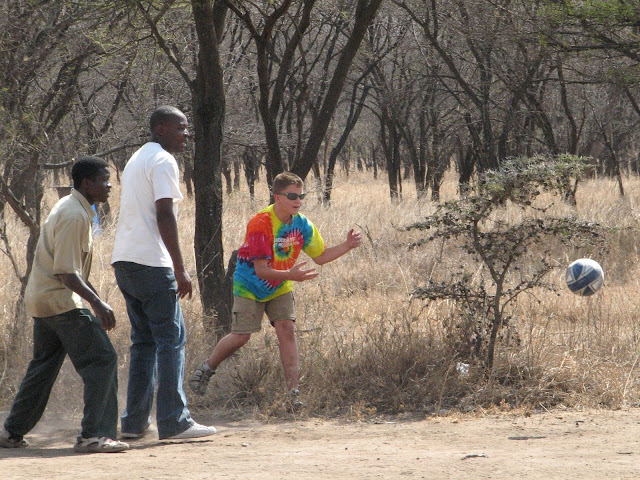 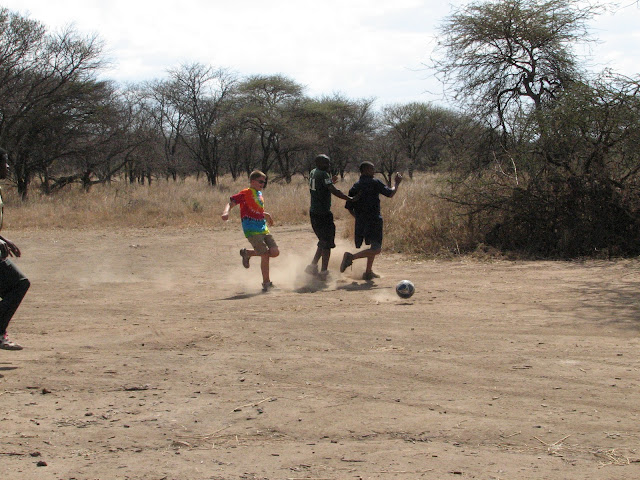 While we did stay together for the first game drive and the last, those were the only times I rode with Cam.  He loved the independence, happiest when he was completely without his family accompanying him in the Land Rover, and sitting in front with the drivers.  And the new friends in our tour group?  They couldn't say enough nice things about him, and were happy to have him along in their vehicle.  And though I was not surprised, I was pleased... because if you are retired and going on the trip of a lifetime, I'm not sure travelling with a teenage boy is on the top of your life list. I was concerned about it at first, not wanting them to feel like they had to be in charge of Cam... but it turned out that he was just fine taking care of himself. 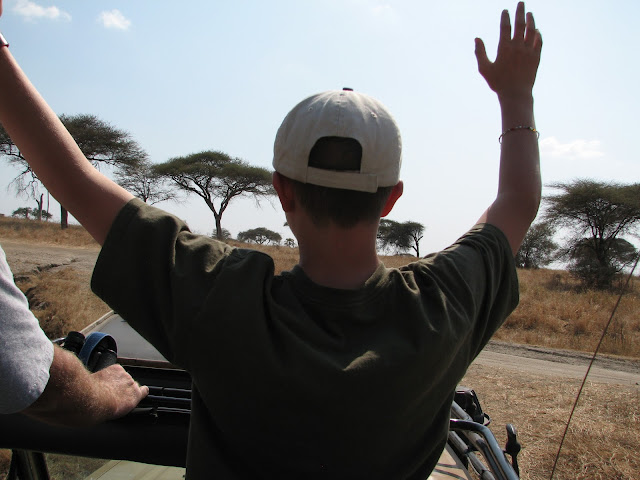 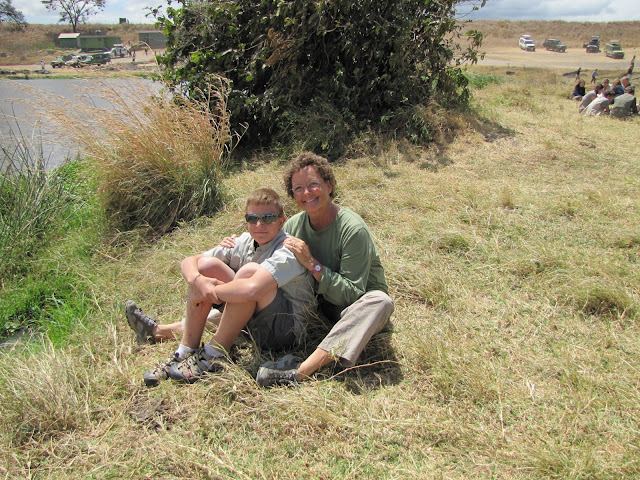 We sat together, that last evening... and shared our highlights from the trip.  I had prepared my heart with what I wanted to share, but by the time it was my turn to speak, I was a mess.  Several people had mentioned how special it was to have shared this journey with our family, with our children, with Cam.  One of our guides shared that Camden was actually the highlight of his trip... even with all of the amazing and extraordinary (even for drivers) sights we had seen.
Oh, this mother's heart came undone... 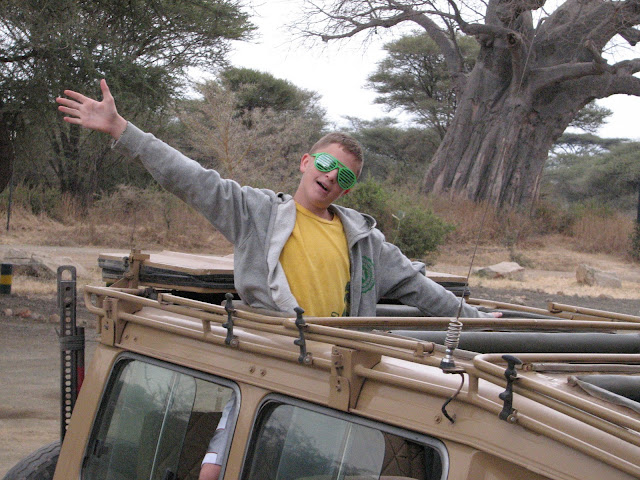 He is the one... who captured Africa's heart, even as it was capturing his.  It seemed there was not a person we met who was not taken in by his joy and adventure, by the way he embraced it all.  And when it was time to say goodbye... what started as a high five or a polite shake of hands, ended in an embrace.  And the tears started all over again, watching these grown men pull my son into their arms, thankful just to know him.  On the way to the airport, leaving Africa, he was still waving... this time, hanging out the window as much as I would allow.  People smiled, and waved back enthusiastically... children navigated through the crowd on the side of the road and raced with the bus for blocks, just to keep on waving...
If there was ever a boy who make you smile at the world, it would be this one.

Camden in Africa was... truly amazing.

Posted by Dawn
Email ThisBlogThis!Share to TwitterShare to FacebookShare to Pinterest
Labels: africa

Oh Dawn. What a beautiful post. What a wonderful son you are blessed with. I can feel your mama's heart for this boy and your pride in him. He's going to cherish this memory forever-- and so are you. :)

what an awesome experience you gave to your children. It takes a while to fully process the kind of trip you all had. I'm glad you are able to savor every moment you all had. :-)

I smiled the whole way through reading this post :) He is such a joy - having met him, what a sweet, fun boy! But from this... Dawn! I'm speechless.

After reading this my heart is coming undone too.
Beautiful...the words, the photos and especially Cam.
xoxox

There is a smile on my heart as well as my face!! How extremely special to see your son grow in ways that you never imagined!! WOW!

Oh, that boy. I already loved him, just from knowing him through you. But now--well, I need to find a Kleenex, but I am so happy to hear this story. I knew it was special. . . but I didn't realize just how special.

What a great post. You did your son's spirit justice. :)

I know you labored over this post, Dawn, but it is perfection -- it turned out beautifully. I really understand the essence of Cam through this piece, how he captured Africa's heart with every smile, handshake and big-hearted embrace. What a welcoming, giving, loving soul he is. I'm not surprised. He gets it from you, dear girl.