we were not trampled 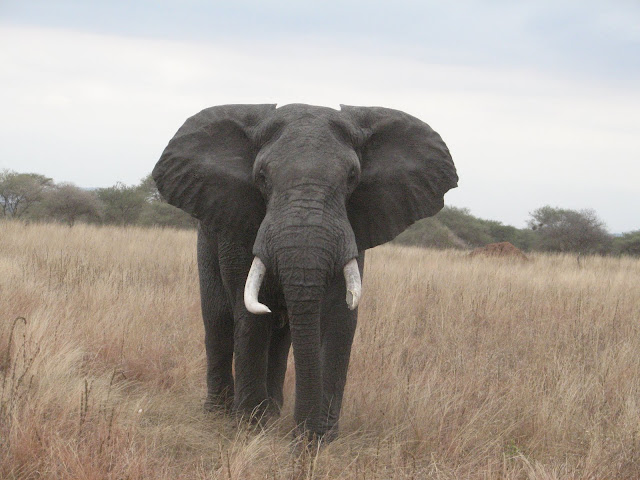 We may have sorta been charged by an elephant.
Okay.
If you had seen his ears thrashing you would know there is no sorta about it. I guess elephants don't particularly care for safari vehicles speeding up at them from behind. Or people yelling in excitement and fear. I had to zoom out to get this picture... 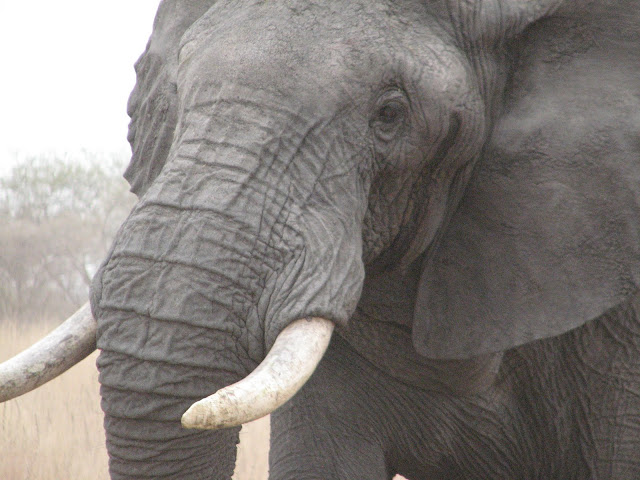 It is the last one I took... because after that I ducked down into the safety of the vehicle. Eric had the flip video out recording him- and it is crazy to watch. I wish I could show it to you, I really do... but both he and my Mom swore, and I'm not putting that up here! Anyway, then he dropped the camera. I don't know if that was because of the huge elephant staring us down, or my Mom swearing, but either way, it is a nice tour of the back of my Mom's head and the interior of the Land Rover.
Once the elephant tired of us, or realized we were swiftly moving in reverse, he headed off in another direction. And another vehicle (that was stopped.) We watched (from a distance this time) and it looked like he may have gotten close enough to lick the window, but we really couldn't be sure. At any rate, the visitors in that vehicle probably got some great close-up pictures... if they weren't hiding under the seats. 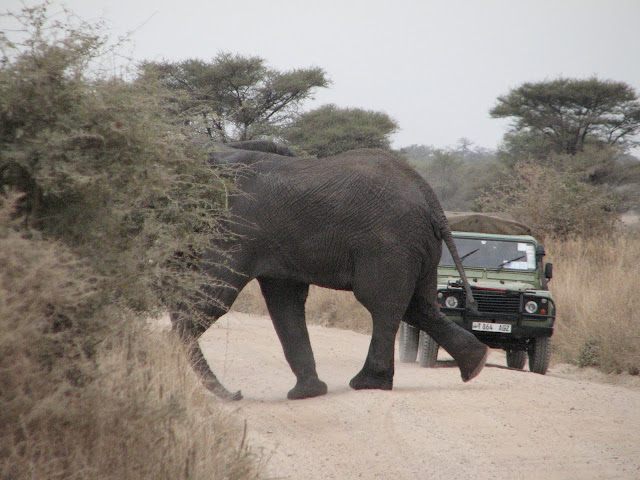 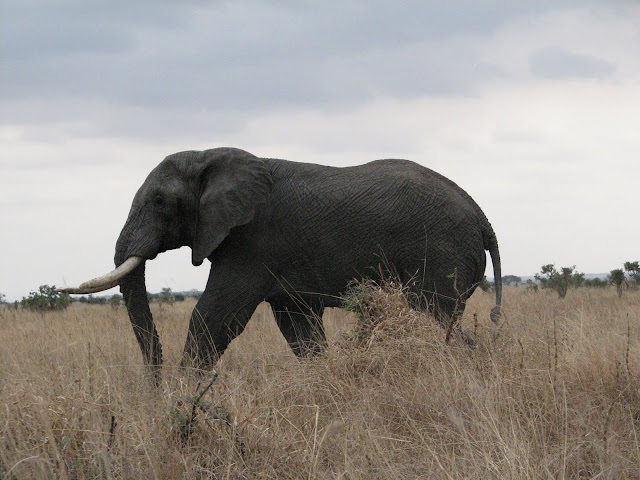 Moving on down the road, the elephant was walking parallel to us. We were being brave, and standing up out the top of the vehicle (quietly this time!) but I think he was looking at us.  As he moved on forward, pushing over and through small trees,  I told Laura If he turns toward us, GET DOWN!
After we had had our fill of elephant watching, we headed on out to the main gate and the happy room... laughing all the way.  Turns out that one of our other vehicles was just up the road from us and saw the whole thing!  So we had our story, and they had one, too!  I think George knew exactly what he was doing... I only wish that Cam & Bob had been in our car, too!

Posted by Dawn
Email ThisBlogThis!Share to TwitterShare to FacebookShare to Pinterest
Labels: africa

What a wonderful trip you all had. You took in so much and so deeply. I am enjoying reading all about it.

You can't mess around with Dumbo's Mama!!!
I think the video to this would be entertaining..cussing and all. :)

So funny! But oh my goodness--you had to zoom OUT to get that photo?? That may be a little too close for even me, the elephant lover!!

I don't know that I want to be close enough to an elephant that I have to zoom out to take its pic! Aaack! But what a story! Love it. : )

Oh my gosh, that elephant is huge -- and to think you made her a little mad! Scary!! Love these pictures...even though you and your mom did have 10,000 heart attacks getting them!

ohmygoodness!!! that really brings it home doesn't it?!

The thrill of adventure, very exciting.

Holy Cow! That is crazy-very exciting!