Favorites change...
Sometimes it takes a year, or maybe only a week.  Once in a while though, a favorite stays a favorite... forever.  At sixteen and nineteen, with at least a decade of love behind them, I don't see these two swaying their favor to another...

We were in line to meet Chip and Dale... and then his attention, and his feet, split as he spotted Stitch just coming across the street.  With his Stitch "hands" clipped on his belt, he waited his turn.  I handed him my Sharpie, and suggested he get his palm signed... 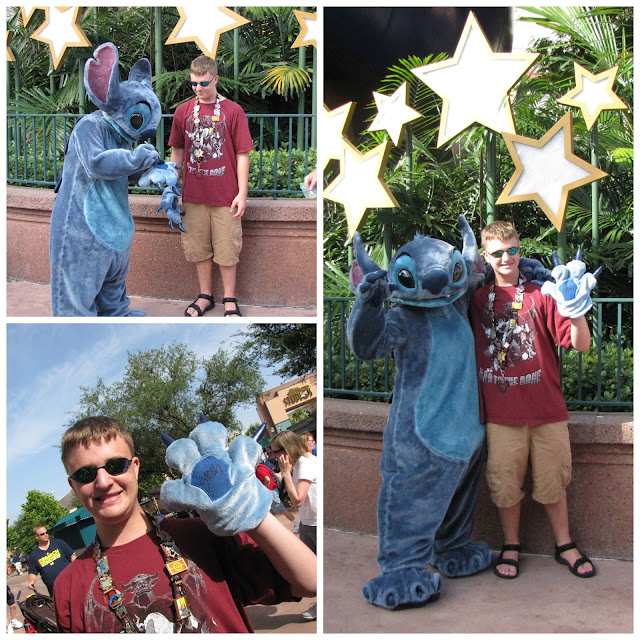 By the end of our trip he had both palms signed... and while we stood at the parade, Stitch spotted those hands from the top of the double decker bus and pointed right at Cam.  Those two... they may be brothers.
: :
Camden & I spotted Marie at the Magic Kingdom the morning of Laura's arrival... I had never seen her before!  On our last morning, racing through the Magic Kingdom so Laura could ride Space Mountain, there she was again.  The line was long, but not even the look on Eric's face could rush us along.  I took out my Sharpie once again, and dug for something she could have signed.  I had paper, but came across something a little more lasting.  A gift to me from a special friend... but I knew she wouldn't mind. 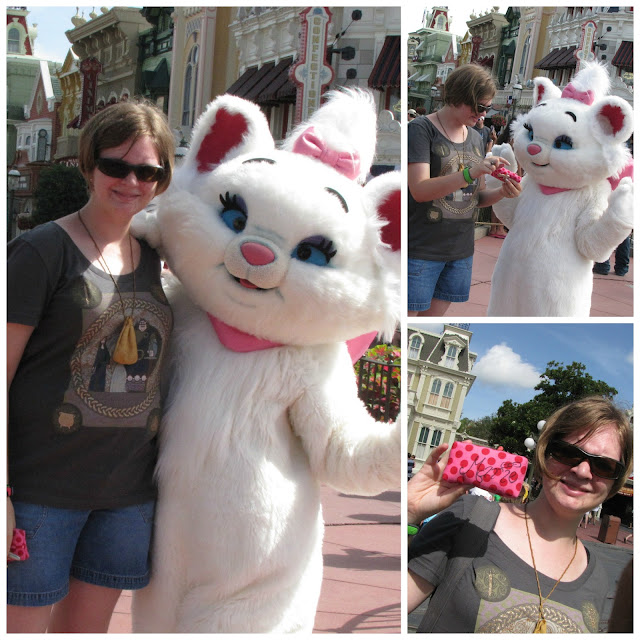 It was a dream come true... seeing my grown daughter meet her favorite, after years and years of loving her, singing along with her, pretending to be her.  Her favorite color may no longer be pink, but Marie will always, always be her favorite.  And I think, perhaps, it meant more to me now than it could have possibly meant when she was just three...

There is no age limit on magic or dreams come true.  No expiration date for a mother's tears as they watch a dream play out.   I catch myself dreaming these dreams, these oh-so-small dreams that fill a heart... and know that here, in the land of magic and Never-neverland, a dream is a wish your heart makes.

Oh, you just made me cry, friend. When you sent me the sneak peek I didn't realize just how much this meant. How purr-fect to have her sign the pink and red fabric! And Camden with Stitch - so sweet. Yes, a dream is a wish your heart makes.

What sweet memories!! There really is no age limit for making memories is there...

This is the coolest thing ever. I love that you had the photos of 'then' and were able to capture the 'now'!!!
XOXO