A little bit of fear bubbled up inside me when she asked if I wanted to walk on the weir. Every time we have kayaked up to it, it was wet. And slimy.  Camden had confirmed the slippery-ness of it when he dragged his kayak over and paddled up the other side.  But I decided that at least we could walk up to it.

Leave it to God to force me out beyond my fear... 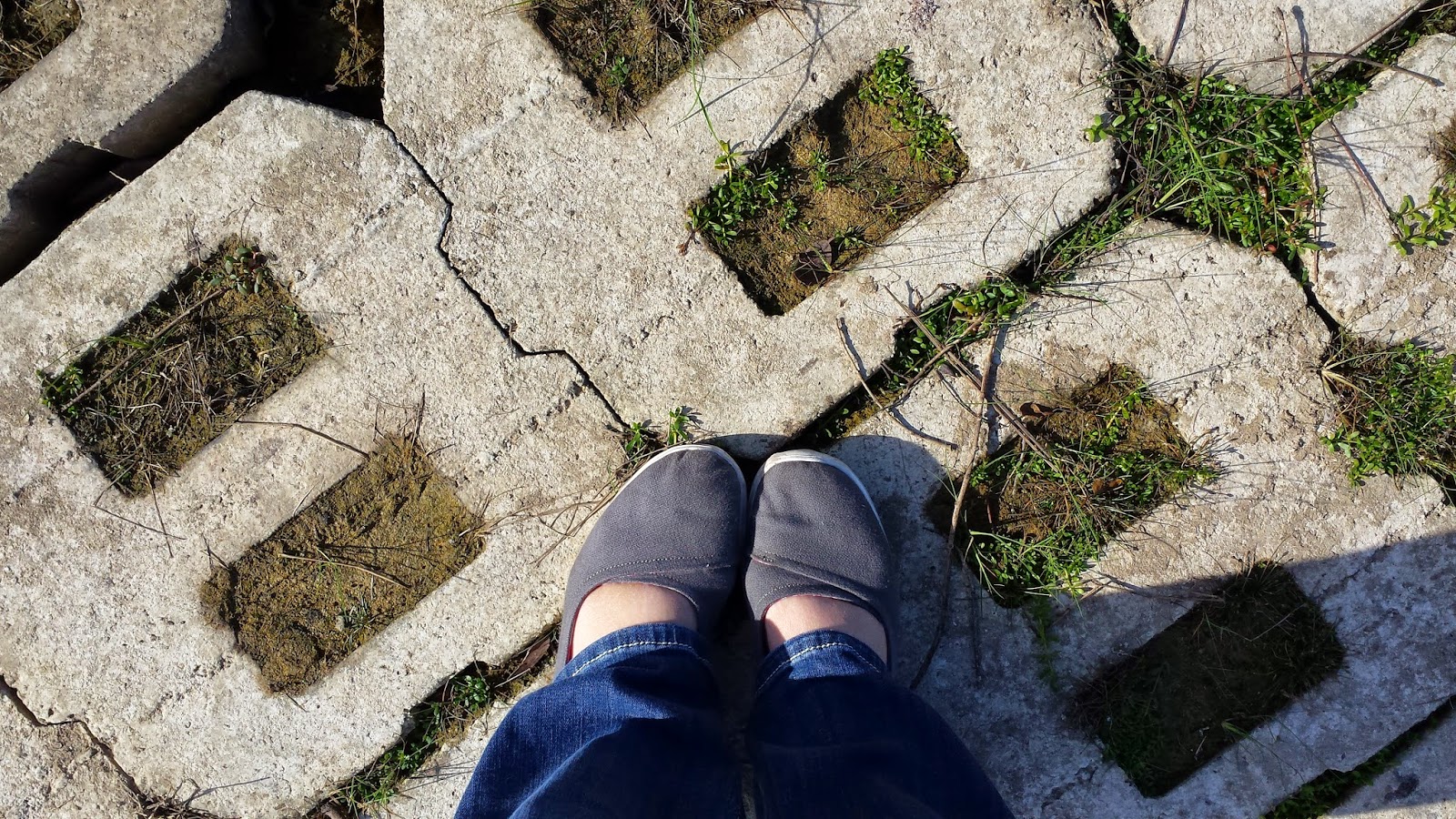 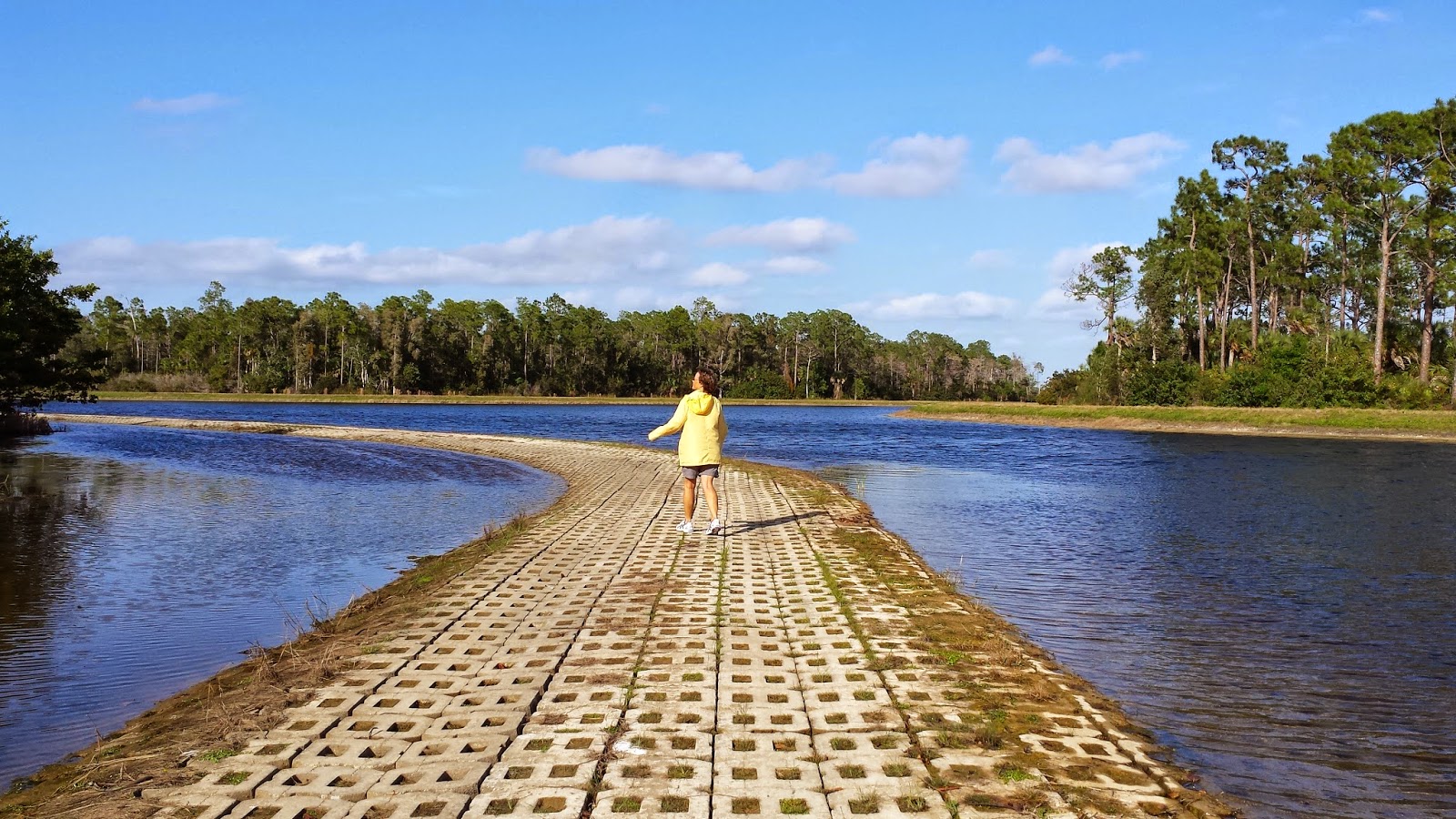 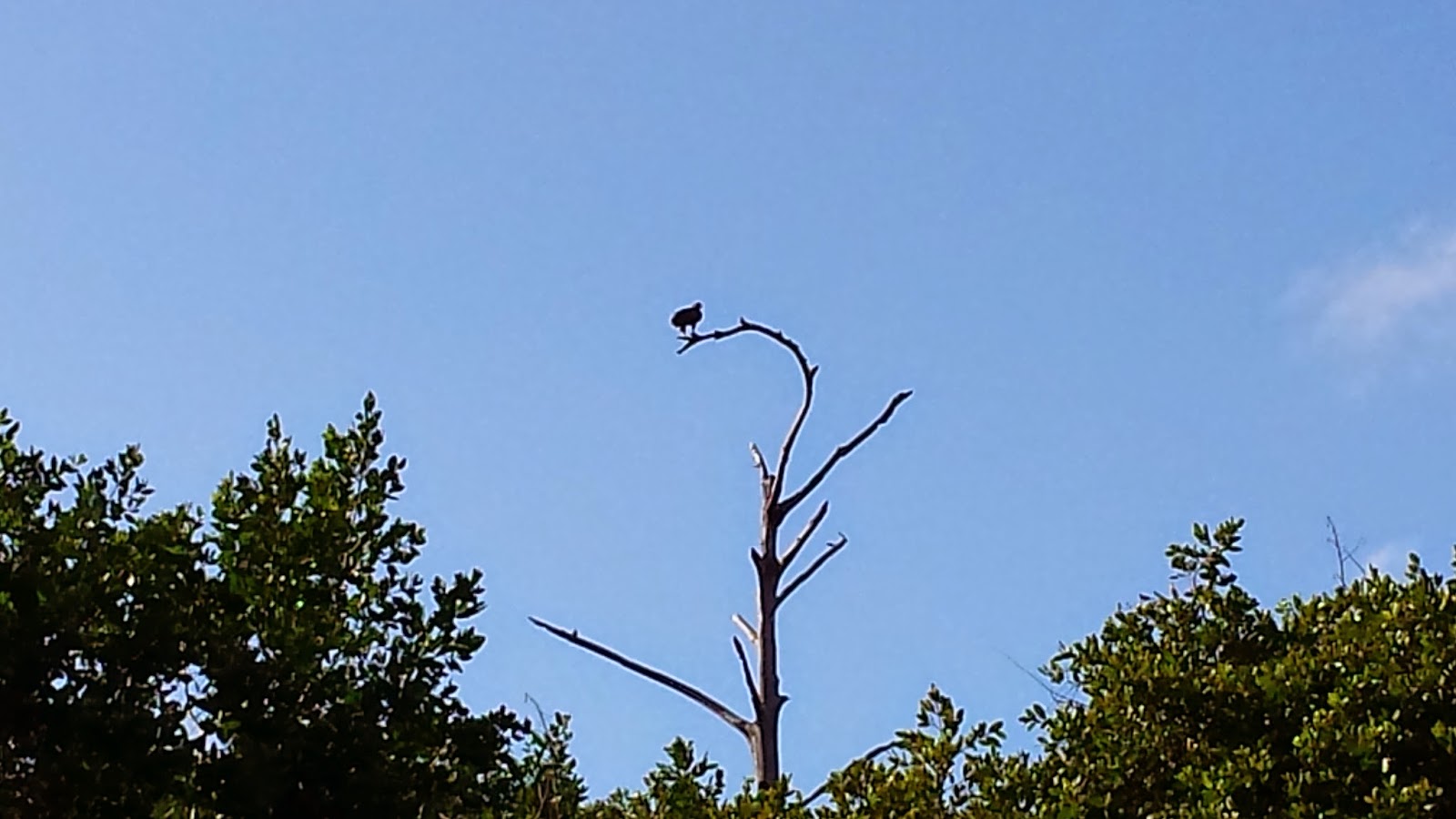 We spotted a bird coming in for a tree landing, and I couldn't not wander closer.  Was it an eagle? Or not?  I made the first few steps out onto the weir in all but a tip-toe.  It wasn't wet. And although I could hear, and feel, the water underneath, it wasn't slippery or slimy. We still couldn't be sure of the bird, so we walked out a little more, and then a little further.  By the time we had decided it was a juvenile bald eagle, I had walked beyond my fear, and found a new comfort zone.  And as we navigated the remaining bricks, I was laughing in the joy of it.

I don't know if I even have words for what happened next...

Mom and I decided to make the loop, and walk along the dirt trail, rather than retrace our steps.  It was not an easy trek, the trail rocky and littered with ditches... not to mention the fence we had to climb around because the gate was locked!  And just when I thought the walk might never end, we spotted a red jeep across the water, driving (!) towards the tower path.  Hmmm. Bob. And Camden. We waved and jumped and shouted to no avail.  And we decided that if they were going to the tower, we wanted to go back.

Backtracking seemed like a fine idea... but once we climbed back around the fence, I realized that we had walked a greater distance than I had originally thought.  What if Cam & Bob turned around and headed home without even seeing us?!  I called and texted Camden, but there was no answer... so we picked up the pace and trekked on.  Finally, we spotted them again, and this time, they saw us. We thought they would wait for us, but Bob has a way of being our knight in shining armor (for officially 31 years and three days!)... 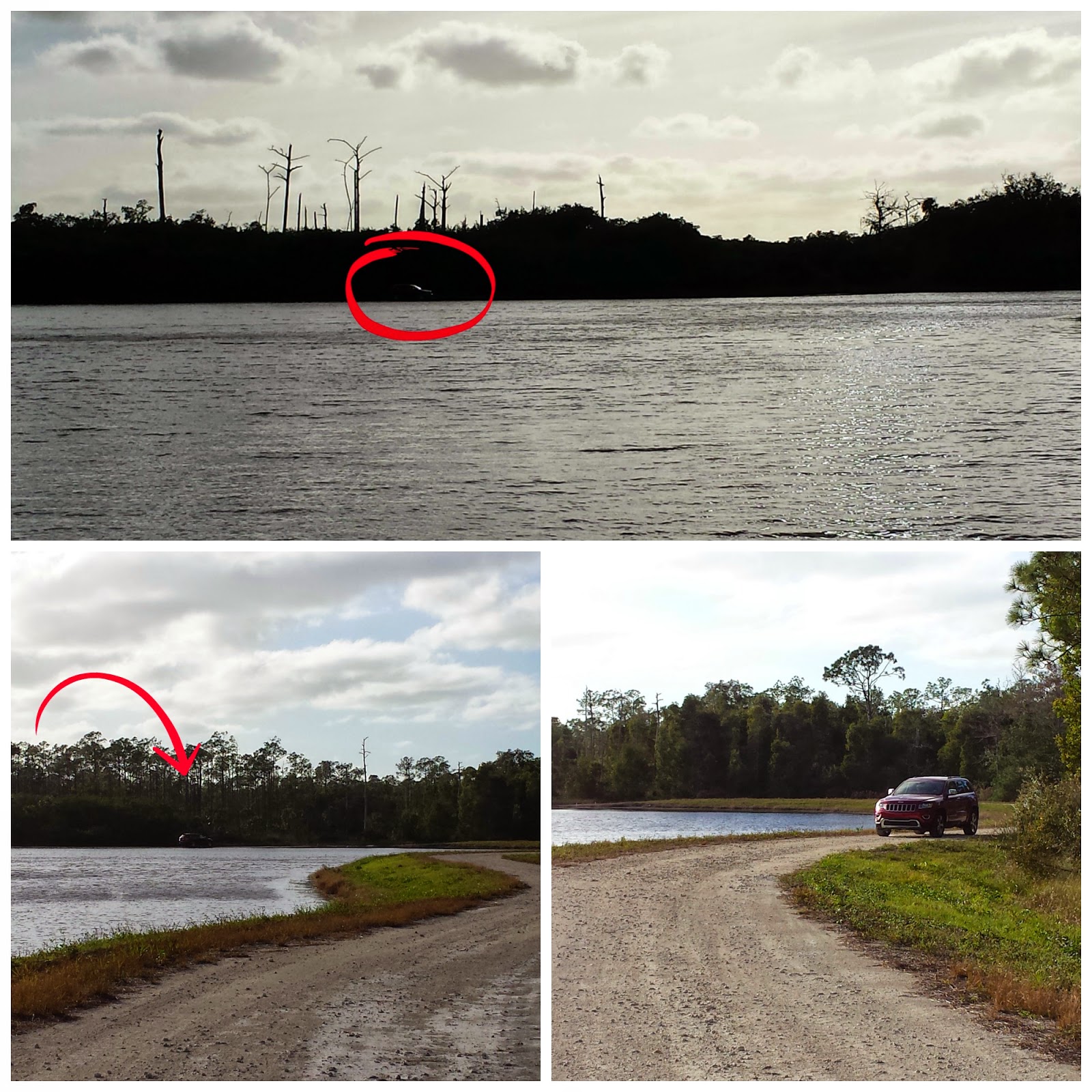 I was afraid to walk it, but here he came driving across.  Mom and I were laughing hysterically... and she confessed that he had been wanting to try it for months.  We were still laughing when we wearily climbed into the jeep... thankful for the save.

On our way back over the weir (driving!) I was terrified we'd end up off the side, but Bob got us home, safe and sound.  Cam's thoughts about Grampa driving them over the weir?  Cool. And? There was actually an adult bald eagle just sitting in the eagle tree... 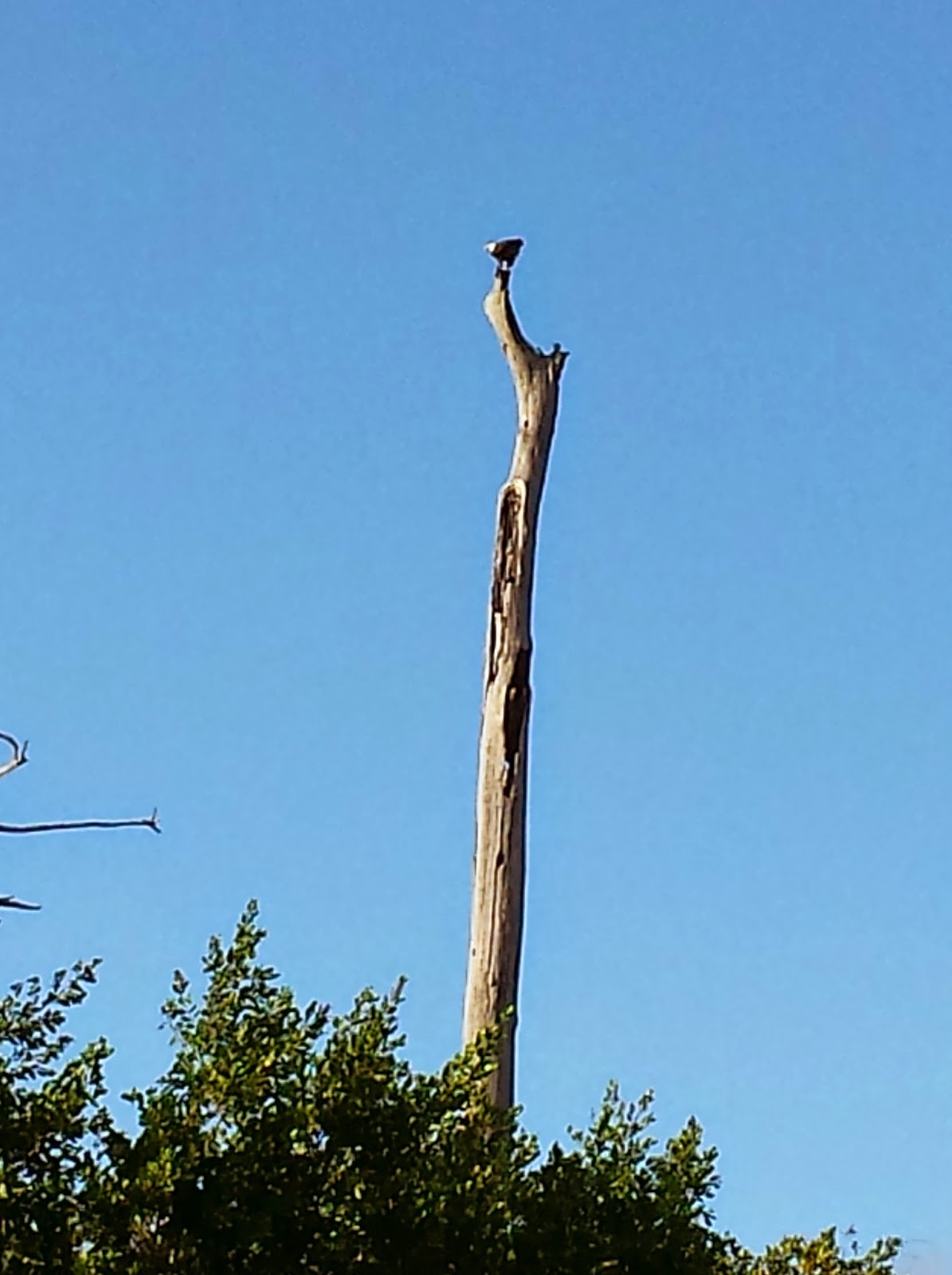 we made all the right decisions that day. It was a great day! ILY

Facing your fears and overcoming! With a little help from your mom and Bob. ;) I would have been in the floorboard or walking behind while driving over that!

You live in beautiful country.

I can't believe how pretty the weir is when it's dry!!! I'm so proud of you for conquering your fears...it helps when your mom is fearless!!! Two eagles? I'm jealous.
XO