As soon as the pianist played the introduction I knew I was done for. Why, why, had I thought it was a good idea for Laura to sing on Camden's big day?  As her voice sang And He will raise you up on eagle's wings the salty tears rolled and I had to gain control.  Two beautiful happenings for both of my kids?  It was overwhelming for this mother's heart.  But by the time she finished {beautifully} singing Cam's favorite hymn, I had regrouped and was smiling again. 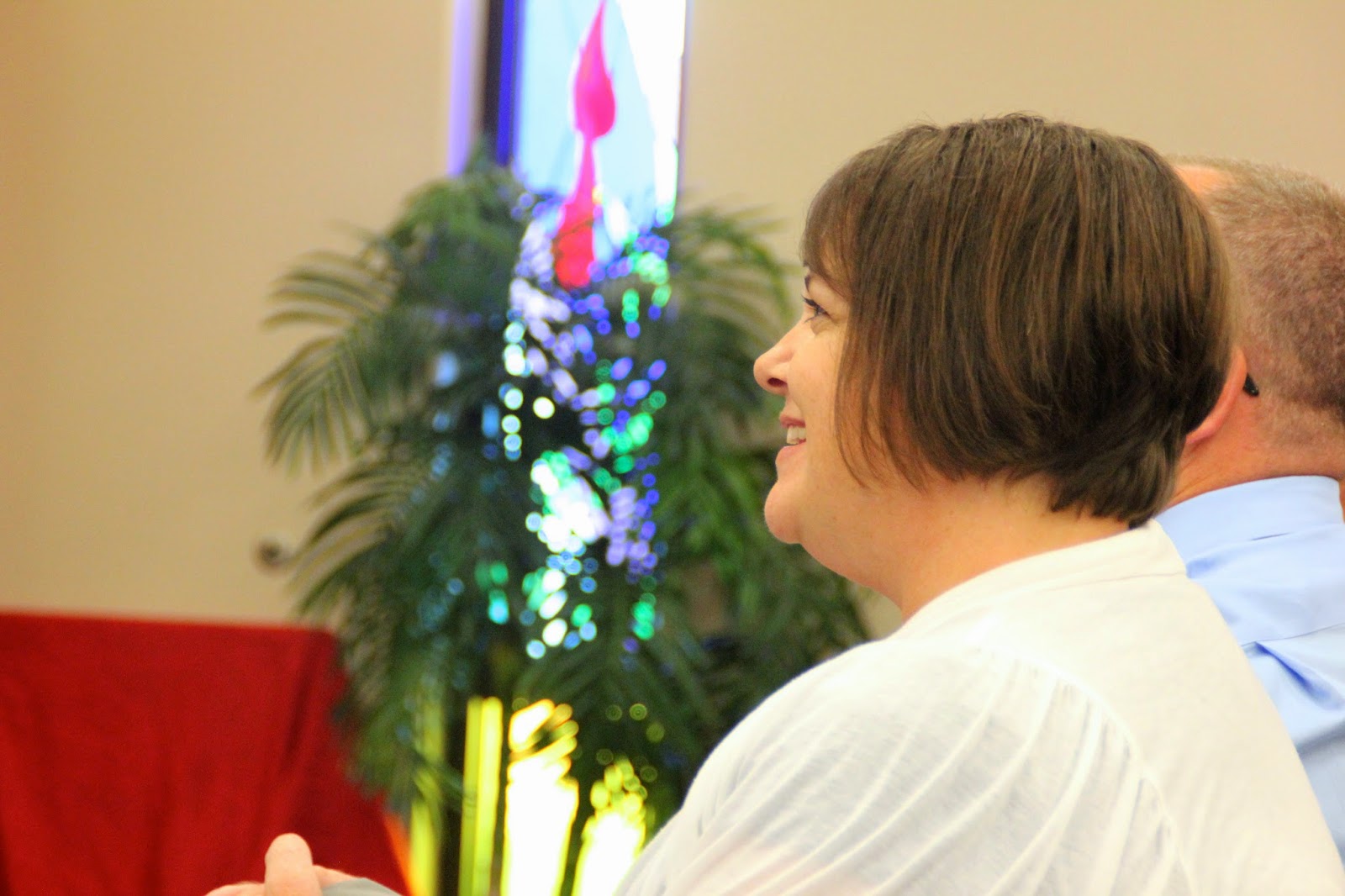 Camden was escorted to the front by his troop-mates and fellow Eagle Scouts, and I could sit back and enjoy.  Even though we had written the ceremony and read {and re-read!} it several times, to hear our friends actually speak the words was so meaningful. 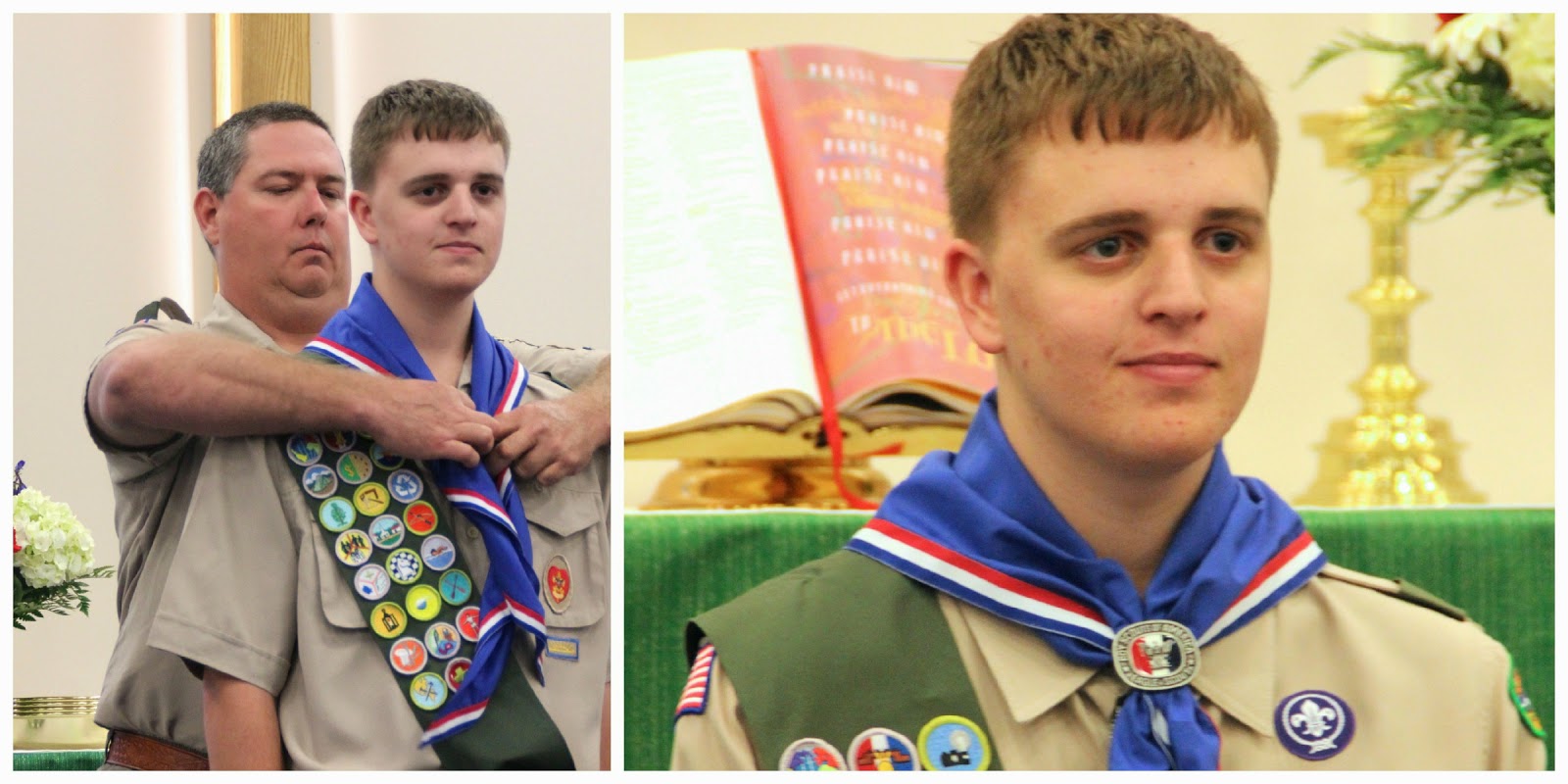 Earning the Eagle Scout Award represents another step forward by the Scout toward the BSA’s goals of developing citizenship, of imparting character development and enhancing personal fitness, and the achievement of Eagle Scout is indeed the highest honor that a Scout may achieve.

Of any 100 boys who become Scouts, it must be confessed that 30 will drop out in their first year... Each of the 100 will learn something from Scouting. Almost all will develop hobbies that will add interest throughout the rest of their lives... Four of the 100 will reach the rank of Eagle, and at least one will later say that he values his Eagle badge above his college degree.

He stood tall when taking his Eagle Oath, being reminded of the promises he had made in scouting before, and accepting the new challenge and promise before him.

The important thing to remember—and this applies to all of us—is that we shouldn’t forget the promises we’ve made before just because we’re making a new promise now. It’s still important to do our best, to help other people, and give goodwill, to be prepared, and to do a good turn daily. 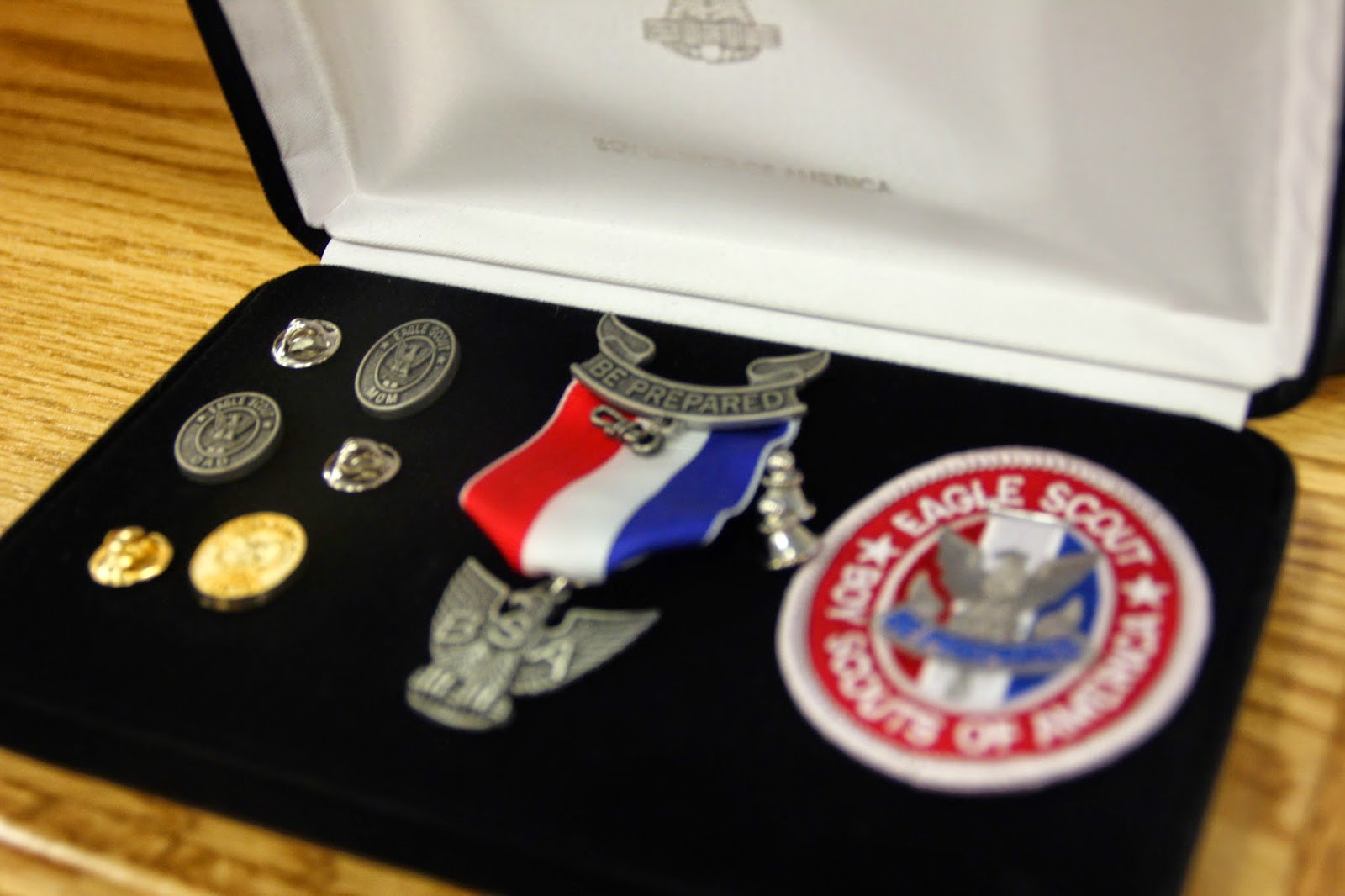 And then came the moment when Eric and I joined Camden, and he received his actual Eagle Award. I love that Boy Scouts honors the parent's {especially the mother's} involvement along the trail to success... and I was truly honored to pin Camden's award above his heart.  I may have teared up during this moment, but instead, my hand let the pin backs tumble to the carpet... grace. 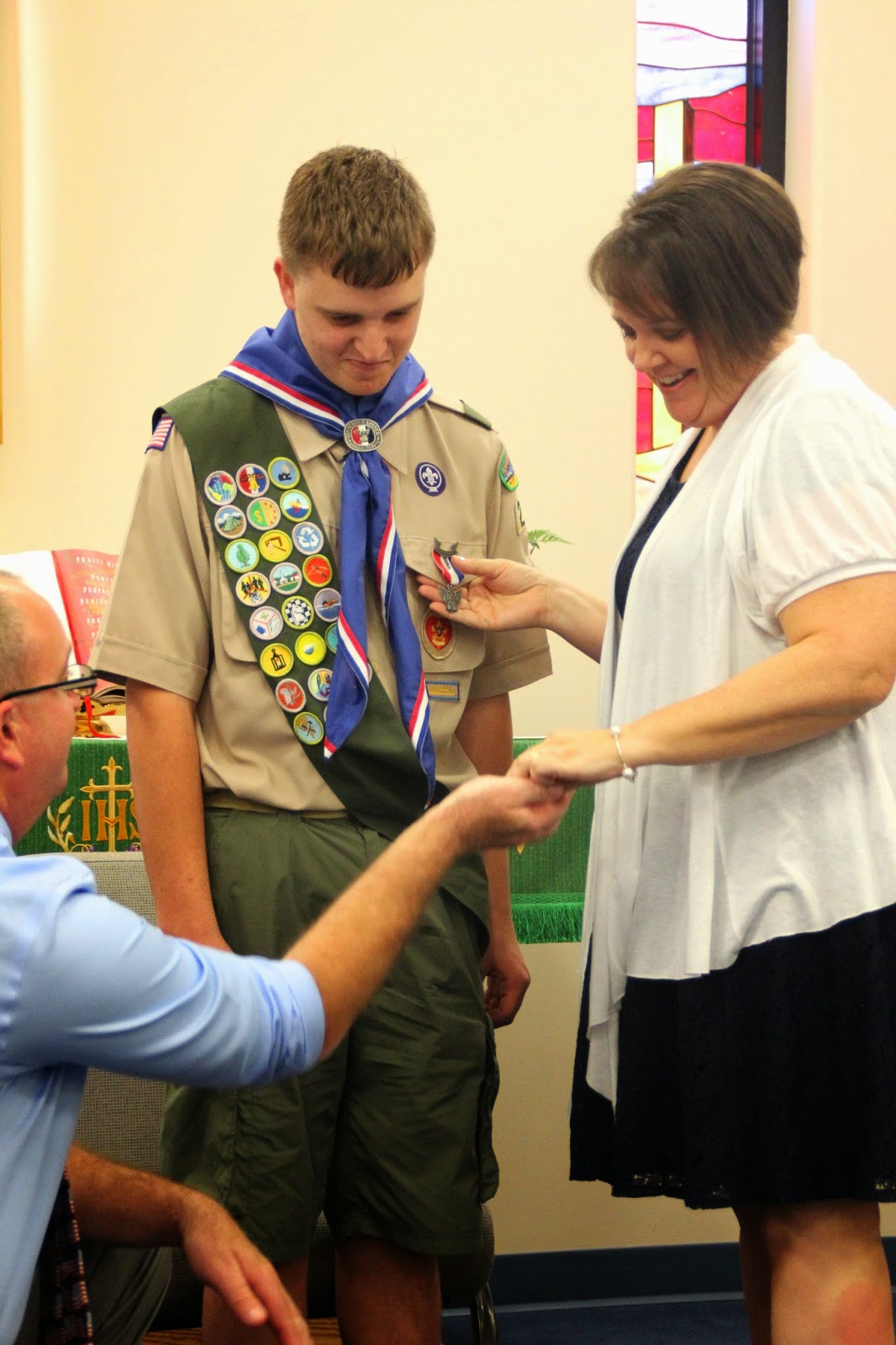 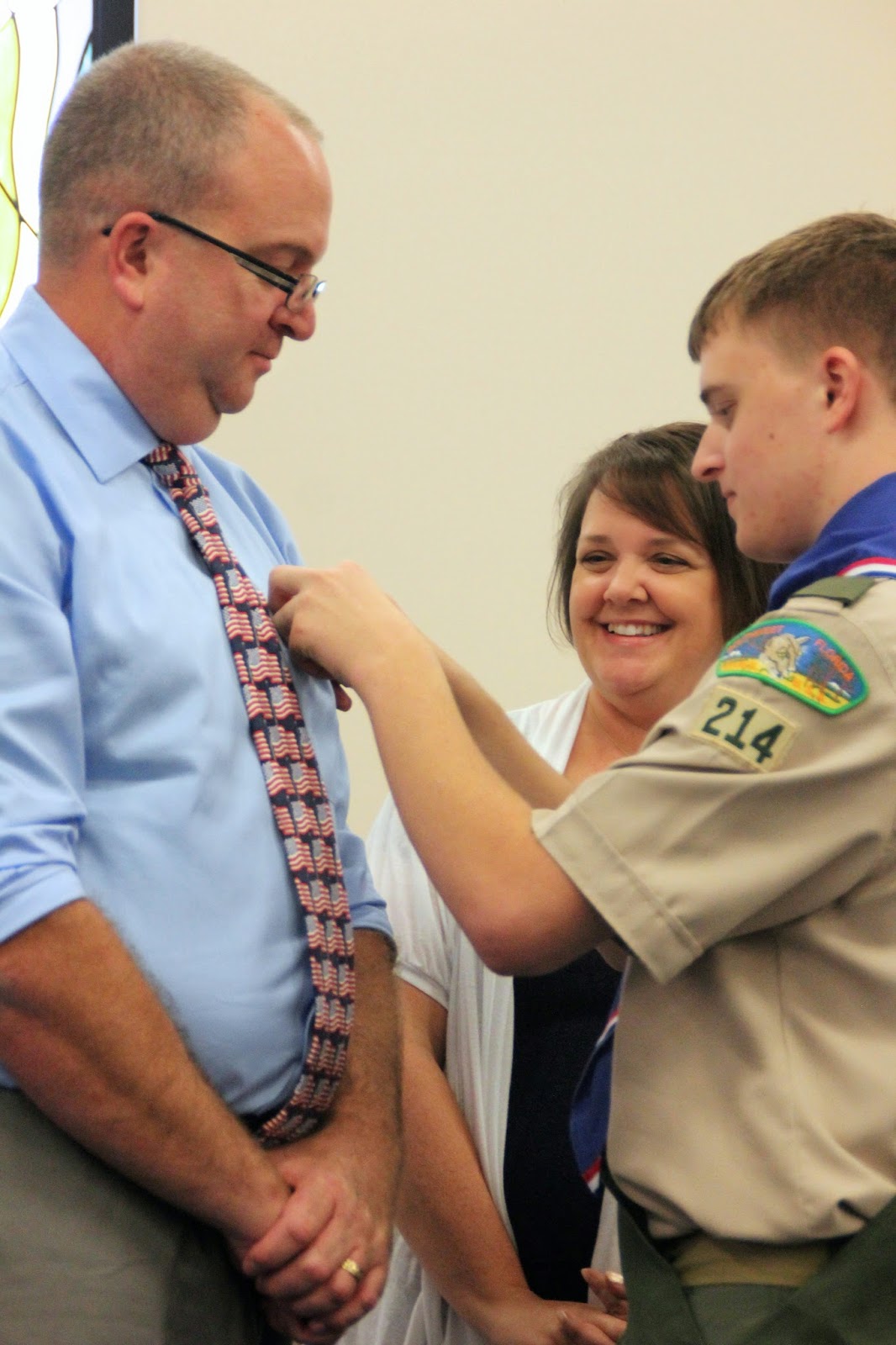 I enjoyed the ceremony so much.  It all came together as we planned, and moved right along.  A representative from the Marine Corps League presented Cam with a good citizen award and a beautiful challenge coin.  George, the amazing volunteer from CREW (where Cam's project took place) read a letter singing Cam's praises and presented him with a certificate. Camden had a turn to speak, too.  He thanked everyone for coming, and he presented the Eagle Scout Mentor pin to George. At this point I realized that oh no! Just as I was having the time of my life, I was up next! 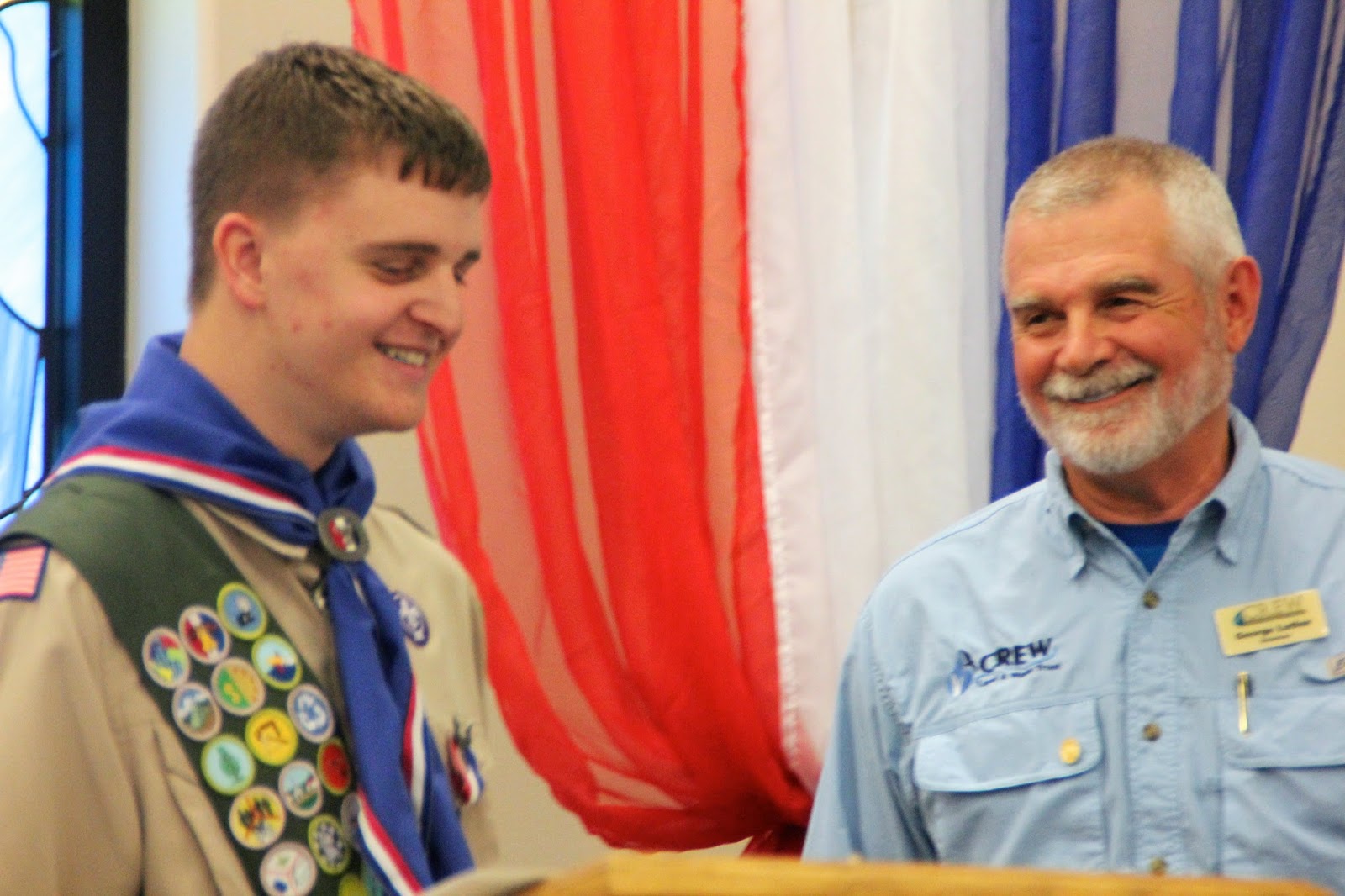 I had spent weeks playing with the words in my head and heart, knowing that I wanted to express how significant this event was to Camden and to us, but the words would come and go.  I must have six documents started on my computer. I cut and pasted from one to another, deleted this, and added something completely different. Saturday night, as we were gathered around the table, so ready for bed, I finally hit print. 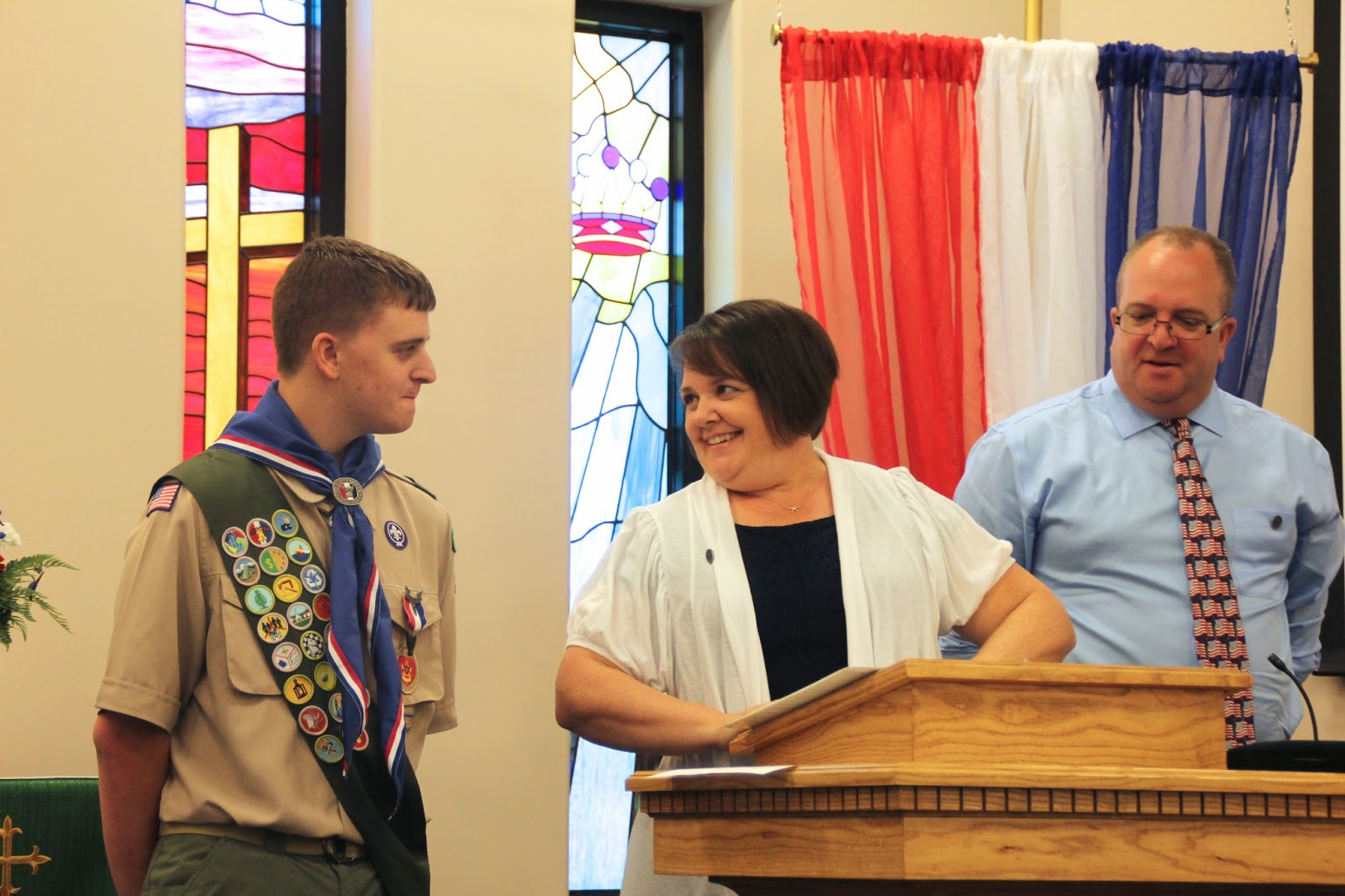 I stood at the lectern with Camden beside me, and Eric just behind me.  I took a deep breath, and then another. I could hardly begin.  One more breath. My voice wavered, but I shared how I wondered if Cam had been born with a patriotic soul, or if it had been born in him with the events of 9/11.  I wanted our friends and family to know that while Eric's deployments took him away from us, and Camden's scouting, that it also gave me a gift I cherished- being a Cub Scout Mom.  I wouldn't trade those years for the world. Scouting was, at times, our whole life... and we loved it. I shared how Camden likes to hold the door, and our guests laughed, as I hoped, when I went on to say for the whole marching band.  There is a kindness about him that sets him apart, and I love how he loves to be different, not to stand out, but to stand up for what he believes. I had already noticed my Mom was a mess of tears in the front row... but I had to go on and share how our parents have always been our cheerleaders- for our kids, too.  And that they had created a legacy of service in our family. I almost did not make it through that part... but I knew I was almost done!

I think my saving grace was knowing that I didn't have to wind up all my words into a WOW ending... because we had been keeping a secret from Camden that was all the WOW we needed.  We had asked the Jesus Painter for a congratulations letter for Camden, because meeting him and watching his art come alive was Camden's favorite part of the National Youth Gathering we attended in 2013.  He ended up sending more than a letter though... 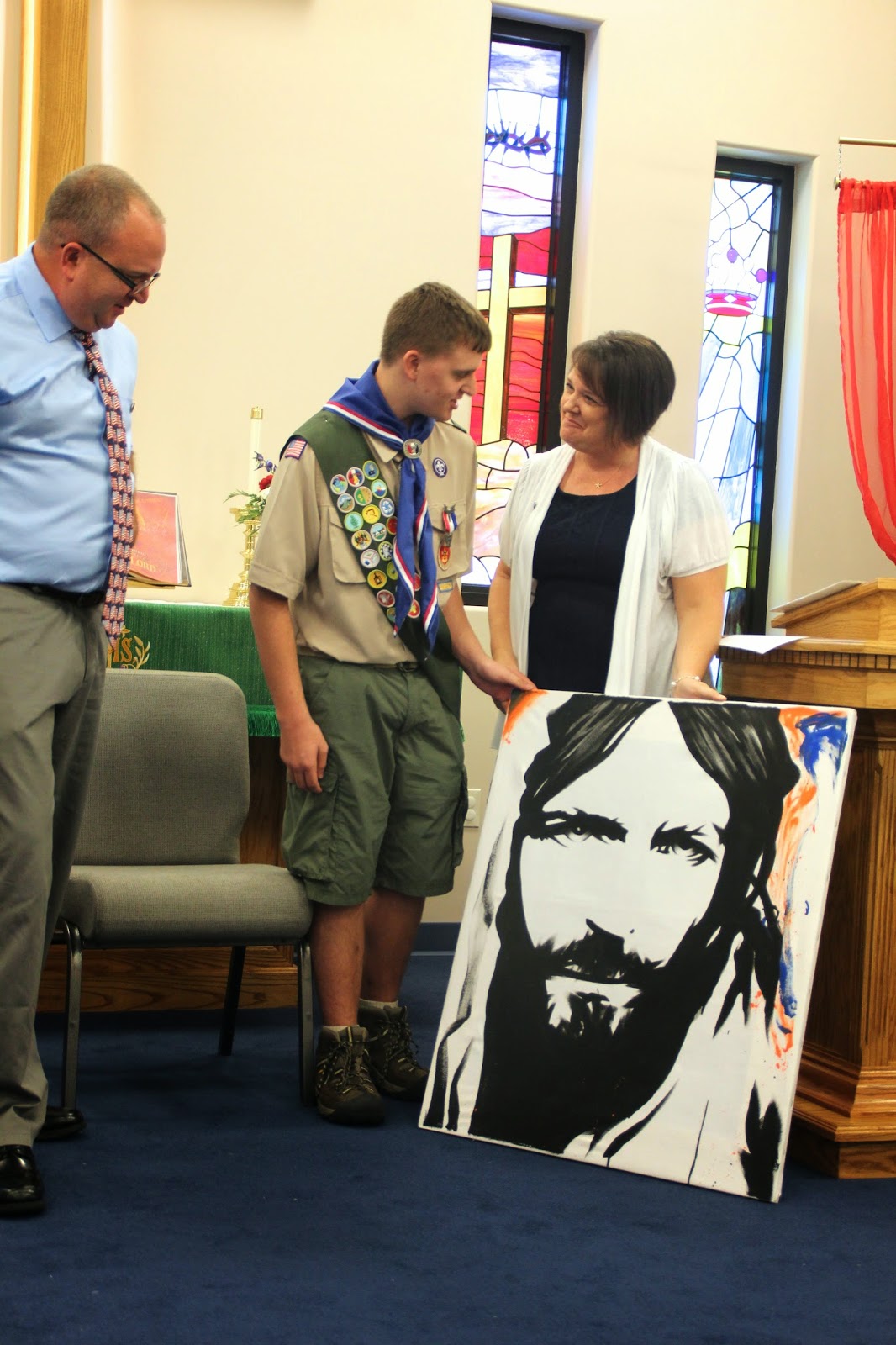 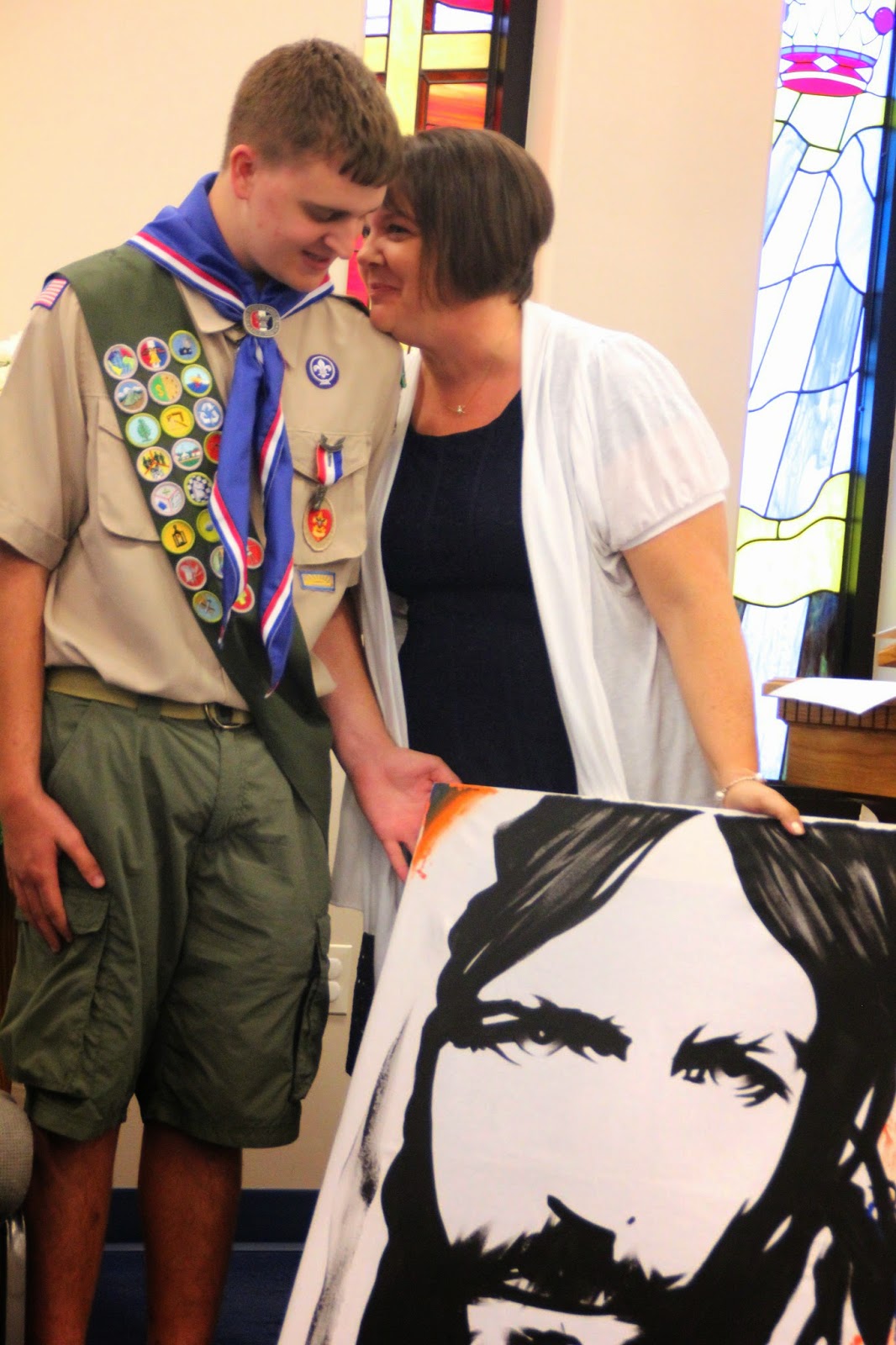 On the back of the canvas he had written Congrats Camden!!! You've proven your self a hard working dedicated person. Use that to honor God and serve others.   Camden is so humbled and honored to have received this work of art as a gift.

I was happy to finally sit back down, breathe, and enjoy the last bits of the ceremony.  Our pastor spoke about Camden before he closed with a prayer... and then just like that, it was over.  People flooded up to Camden, hugging and congratulating him.  With every hug, we thanked our friends for coming... and they shared how honored they were to attend, and also that I made them cry.  Suzanne laughed and told me how she could. not. make eye contact with Eric while I was speaking, because he was on the verge of tears.  I laughed, too... because I had no idea. I thought my Mom was the only one crying...

It was a beautiful day.
We had planned on celebrating Camden, but in the end, we felt just as celebrated. I will count this day, in fact the whole weekend, as one of my most treasured memories.

Goodness, Dawn. I couldn't see the words at the end of this post. The photographs perfectly capture the love and pride you two have for Camden. Such an amazing testimony to the power of the Lord on his life. Much love.

(I love your haircut!)

I am bawling my eyes out. Everything is just lovely and then the SURPRISE just did me in. I love how our lives living for Christ really are tied to all the great things BSA stands for. Not enough words to describe my love for this.

One of the regrets of my life is that we didn't help Lee to pursue Boy Scouts. He was a little interested in BSA after he finished Cub Scouts, and I think he would have pursued it if I had encouraged him. . . but I didn't. I so wish I had.

Oh, well. I will live vicariously through your experience here. Please tell Cam I am so glad and happy for him. And have Eric give you a big hug for me! :)

What a wonderful ceremony and such a special gift in the painting. There is no shame in the tears of joy shed - can only imagine how proud you were.

It was a beautiful day indeed. Jeff and I were honored to be included in this significant event in Camden's life. Our family is so proud to have known him for so long....he is a special young man.
I loathe to cry you know. (ha!) But these were full on happy/joyful/proud tears! Seeing a grown and stoic man on the verge is enough to get me into the ugly cry.
XOXO

I am so happy for Cam. What a wonderful organization. I love that it has influenced him as he has grown. Absolutely love this!