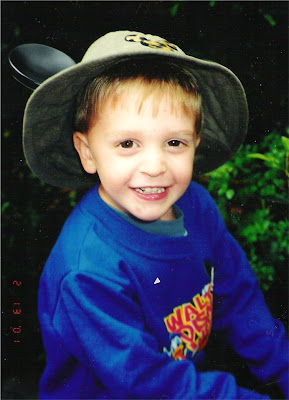 ...hat.
Here is a better view of the HAT in question... even though it did not scan in with any sort of quality!! Now... on with my story...

I love this hat. Camden loves this hat... still. Even though it is finally too small for him (eight years later!) This hat has probably gotten more wear than any other Disney hat purchased... or should I say... hats. Maybe. Because it is really two hats.
This was our first trip to Disney World with the kids... a wonderful gift from my parents... and we had so much fun seeing it all, and seeing it through little eyes. We knew that these kiddos needed their first Mickey Ears... and Laura spotted hers right away- attached to a shimmering, sparkling princess-y hat. Not your traditional Mickey Ears... but she loved the hat, and it was really sweet on her. And so on to Cam. The Sorcerer's hat was cool- but no ears... and that was really our only requirement. Of course, thinking back, this really shows what a go-with-the-flow kid Camden has always been! Here he was, five years old, and he didn't insist on any other hat, or even say boo at our "requirements!" (The require-ers being Mom & Gramma!)
It was the second to last day at Disney... and still no hat for the most patient boy in all the kingdom. Until we went to Animal Kingdom. They had wonderful safari hats with ears... but no kids sizes... and Cam was quite a small five year old! While we were looking, Cam asserted his independence and found his own hat. Just his size. Safari-ish. Fuzzy Mickey on the front. No ears. But he wanted it... I think he was tired of hat shopping, and he really just wanted this one. A mother's disappointment spun around in my head... until I spotted the traditional Mickey Ears on the black cap. I looked them over... then went to the register. Do you have a stapler? The salesman looked at me strangely, and finally said yes. Could I please borrow it? When he said yes, we bought the two hats- traditional Mickey Ears, and the beloved fuzzy Mickey hat, and I began crafting. Yes- right there in the store. It probably killed that man to watch me deface those plastic ears, but I went on. One ear off. Two ears off. One ear on... staple, staple, staple. Second ear on... staple, staple, staple. Ta-Da!! And everyone was happy. Cam got the hat he wanted... and my Mom & I got our ears.
Cam has gotten compliments for years... in fact, on a trip back to Disney a couple of years later, one of the cast members recognized his hat. And I am certainly sure that Disney has seen the error of their ways and my creation is probably selling for $29.95. Sure... it would've been nice to receive a commission... but the smile on this boy's little face is worth the world to me.
Posted by Dawn
Email ThisBlogThis!Share to TwitterShare to FacebookShare to Pinterest
Labels: abc

That is a great hat - nice work.

My son is also a big fan of hats. I'm still trying to find the perfect one for this summer.

That's a great story - and he really does seem to roll with things quite well. I can just see my girls having their own private wrestling match in the store because there is only one hat left and they both want it. Andy and I like to take bets on who's gonna win.

So cute. I can see you doing that right there in the store! What? you don't carry a stapler with you?? along with your scissors????
You must add that to your bag.
Great story...love the picture.

Moms are so caring and creative !!
Hooray for you!!

Nice hat! You did a great job!

Just dropped in from SITS to give you a friendly welcome :)
Hope you are having a great day!

So H is for Hybrid Hat! Good save!

great story! love the hat, you are very creative!!

Great story! And very clever of you. Nothing like a mom in a pinch to bring out the crafty gene!

I love it! I expect to your creations when I go to Disneyland!

What a great idea to fix up that hat for your son! I think Disney owes you a commission!

Such a sweet story! Lovely that he is such a great listener. I think that is one of my favorite things about kids! If they can listen well it makes everything more fun : ).

Checking in from sits! It's Hump Day.

I have a new giveaway on my blog.

Have a great day!