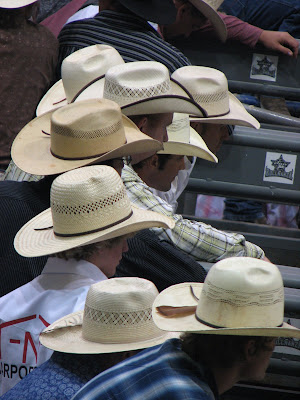 Maybe it started out rough... a crackling microphone and music playing loudly over the announcer... but all in all, it was an awesome night. Okay... two nights. My husband loves me, and he knew that even though I said one night would be enough, that maybe I'd like to go both nights. Oh yeah... he loves me. And my quirky hobbies.
What an experience... to be in an arena full of cowboys. To me... they embody the American spirit... or at least what I want it to be. Hard work, lending a hand to your neighbor, honoring our country, and praising Jesus... all mixed in with a lot of dirt, and a little glory. I was as fascinated by the bull wranglers behind the chutes as I was by the bull riders. The climbing on the rails, up and over... and into the pens... somehow directing the bulls into the chutes. These cowboys are not afraid of hard work or getting dirty... I think they live for it.
When the Marines processed in with the American flag, people rose to their feet and removed their beloved cowboy hats... without an announcement asking them to do so. And before the real action began... there was prayer. Cowboys on bended knee in the dirt, hats over their hearts... asking Jesus to watch over them. No, they were not afraid to pray in the name of Christ Jesus. These guys give everything they have... and appreciate everything they get. 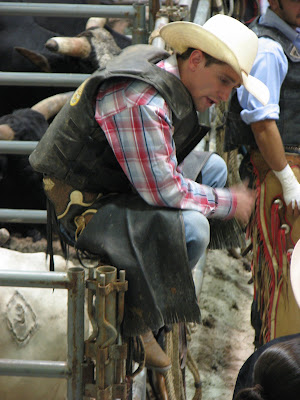 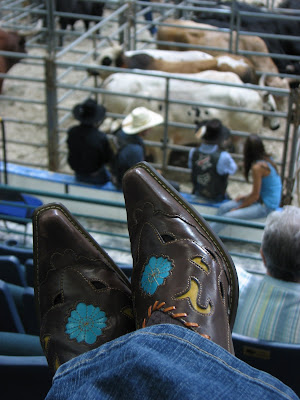 I enjoyed every minute... I laughed, I screamed... and occasionally, I covered my eyes. Win or lose... eight seconds or one... these cowboys love what they do. And it shows... in their laughter, a hearty hand shake, and a lot of dirt caked on their jeans. And as they say... This ain't no rodeo... this is the PBR!
Posted by Dawn
Email ThisBlogThis!Share to TwitterShare to FacebookShare to Pinterest

You are so right. Cowboys really do embody the American Spirit. Until this year, we were part of a 4-H horse club, and there was a man who trained the children interested in Team Penning. He was a REAL cowboy and his name was, Woody. He was hard and tough, yet kind an gentle. There is something wholesome about Wrangler jeans, dirt, horses, cows, and bulls.

I am glad you had fun! I am sure it was very exciting!!

You are a cowgirl at heart! That picture of your boots...priceless!!!! LOVE IT!

What a sight that must have been?! All those manly men kneeling in prayer, unashamed of even their hat hair. Makes me misty just thinkin' about it.

So happy you had a wonderful time with your Cowboy(s)
Love those pictures...'til next time!!!

Fantastic pictures!! I LOVE rodeo's, too, and the whole cowboy thing has always been in my heart, even though I'm a through and through city-girl.

I'm with you. Proud to be an American, proud to be a follower of Jesus Christ!

By the way, nice boots!

those are great! what a fun event. i love the row of hats!

Dawn ,
this was awesome!
The pictures, the sentiment, the joy just burst from the screen.