a sucker for a pretty face

She wanted to sit there all day... I could tell by the look in her eye. I knew it well... seeing the situation from my own eyes a few times before. She was afraid that leaving would mean that he would finally move... and she would miss it. I didn't want her to miss it either. So the three of us stood, leaned, and sat... watching Johnny the Polar Bear... waiting for some incentive for him to get up from his comfortable nap. I prayed. Seemed like a prayer not quite worth listening to... just asking for a polar bear to show some signs of life... but I prayed on. Because she loves them... those black skinned bears with clear bristley fur. She gazed at him... whispering her thoughts. Eric shuffled from foot to foot... also willing Johnny to move. Or for a fish to be thrown to him from the rafters. Fish from heaven. That is what the trainers call it when they toss fish into Johnny's enclosure. Johnny stretched his leg out, blinked his eyes... but that was to be the extent of his movement while we looked on.  At least she saw him move... even though she wanted just a little more.  I thanked God for the signs of life... and we moved onward.  To the gift shop.  Laura fawned over the stuffed polar bears... wanting to add one to her collection.  Eric sighed, and gave in... as long as she paid for it herself.  And so she came to the register... soft polar bear in her arms... and what does her father say?  You aren't going to get the big one?  She wavered... and I gave in and offered to split the difference with her.  We chose the softest one... and contentment overcame this girl and that one... 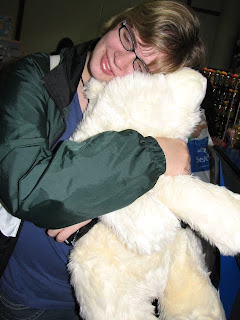 Posted by Dawn
Email ThisBlogThis!Share to TwitterShare to FacebookShare to Pinterest
Labels: laura

awww...so sweet. If you are going to get one, just make it a big one!

How I wish he would have moved for her!! I would sit there all day too...!

oh Dawn, it's one of the pleasures of parenthood to make them happy, huh? to go beyond their expectations, to break a "rule" now and again. looks like you made her very happy...

So cute... sometimes you've just got to get the big one! (although I'd be groaning on the inside LOL)

I love this post!! When it comes to stuffed animals, bigger is better!!!

What a precious photo and a great story of your love for her.

I think you are a wonderful mother. So wonderful!