we were that close

I am like any other mother... all I want for my children is every possible opportunity... certainly not limited to a relationship with Jesus... success in what they love... and a chance to be the "one" chosen for the Shamu show. And I think you have to believe it can happen... in order to even have the chance. We were really close on this trip... as "Kenny" walked out of the restroom, covering her neck with wet paper towels to dispel the heat just a bit, we struck up a conversation. About the weather, about the day... about sitting in the front row to get wet. Camden loves to sit in the splash zone... and on a day that the heat index was reaching up over one hundred, I was certainly not opposed to cooling off. "Kenny" could certainly see the joy in my young son's face... I'm confident she saw a bit of his heart for wildlife, and for just having fun. Then she asked him his age, and he happily replied 12! She told us to look for her up front... she would save us a seat. My mind was racing- was she choosing him? Dawn, do not get your hopes up. Do not say anything to Cam. Dawn, stop thinking about it. If it happens, it happens.

Entering the arena, we rushed to the front, saving seats for Laura & Eric, who were still cooling themselves in the Arctic exhibit. Our spot? Second row... dead center. Camden waved to "Kenny" and gave her a nice hello. After a few minutes, she came over to me quietly and whispered in my ear. I picked him, but then I couldn't pick him... because the child has to be between eight and ten. I'm sorry. I smiled, and thanked her. I think that he had the possibility was more than I had ever really expected. Hoped for? No, but expected. Yes. He was that close...

Although my dear daughter was not as thrilled as I, about our much coveted seats, she managed to enjoy the show. Eric was also not particularly thrilled, but I was certain that we would not get as wet as the other sections, being as this was much further back with Shamu's platform in front of us. And I did promise Laura, that I would not mind if she walked up a few rows right before the major splashing began. She chose to stay... and through her glare, I could see her smile. And it was great to cool off, even if she wouldn't admit it. Yes, we got more than splashed, but in the moment I felt refreshed and alive. Would I sit there again? Yes... because sometimes you have to grab life and let it spill all over your soul... even in the form of chilly salt water. 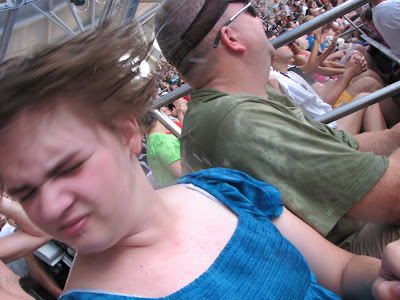 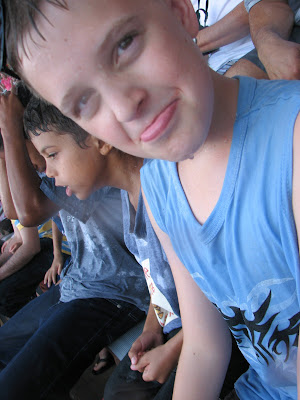 I loved being front and center for the show... I felt that given the opportunity I could have reached out and caressed that beautiful God-created creature. Absolutely breath-taking. Oh yes, we were that close... 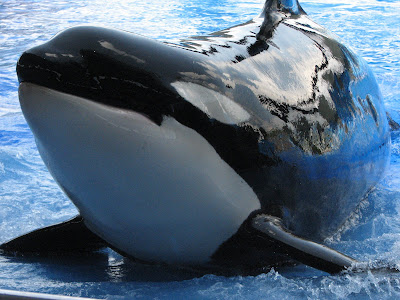 Such a close call for Cam...to be the ONE chosen would have been awesome and memorable for him. (and YOU) I am sure he already knows how lucky he is in life...just look at his family.
Glad you had a great visit with my friends up there...I heart Shamu. (all the Shamu's)

Shell in your Pocket said...

What a fun day and amazing pictures.
sandy toe