We were watching a Christmas special on TV. About food... Christmas food at Disney. We oooed and ahhhed... and wished that we could somehow join in on the fun. We watched them make candy canes from pulled sugar, a six foot yule log and gingerbread houses from scratch... and even gingerbread men. That was when Cam piped up with I've never had a gingerbread man! I looked at him with a smidgen of disbelief... but then realized that he might be right. So I put it on the to-do list.
As he was leaving for school yesterday, I mentioned maybe mixing up some dough for us after school... and in return for those few words, there was a smile so wide... and a thumbs up as he headed out the door. I hoped that the visions of gingerbread men dancing in his head would leave room for a few math facts...
I did mix up the dough... having all of the ingredients on hand certainly helped my cause! But by the time the afternoon came, I was drained. Cam came home... and went right to his homework. I think he knew I was tired, because he never asked about making the cookies. I dragged myself to the kitchen to make dinner... and this little face popped out from around the corner. Need any help? I put him to work cleaning the cabinet fronts... and pushed myself a little more. When the chicken was simmering, I pulled out the flour and the rolling pin... and showed him how. He rolled and dusted with flour. He lined the cookie cutter up to get the most out of the sheet of thin dough... and we popped those guys into the oven. Cam was smiling the whole way. Pushing through just a little more, we mixed up a batch of royal icing... because if you are going to have your first gingerbread man, you need the whole experience... 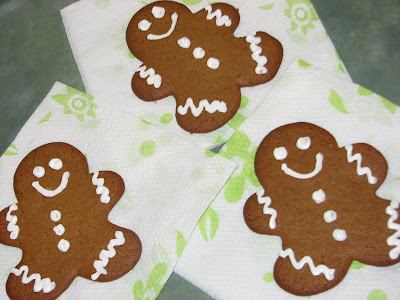 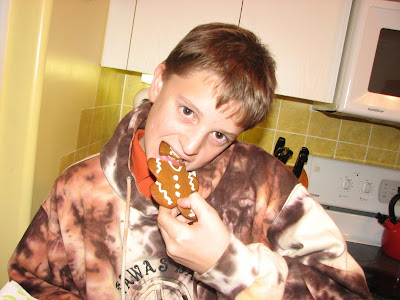 I could see the excitement in his eyes as he readied himself for his first taste... and I hope he could see the love in mine. Do you like it? And his affirmative response came muffled with a full mouth of spicy cookie... and a few stray cookie crumbs.

Unwrap a Tuesday with Emily at Chatting at the Sky....

(wow... this is post #400! who would've thought i would ever have this much to say?!)
Posted by Dawn
Email ThisBlogThis!Share to TwitterShare to FacebookShare to Pinterest
Labels: tuesday

Oh, Dawn. How sweet. Aren't you glad you seized that moment?

I'm guessing he could see the love in your eyes. I can see it!

Don't you know he will cherish those memories of you taking the time to make those gingerbread men?
I love baking, but sharing the experience with the children is the best part!

your a good mom and this will be on his list of wonderful Christmas memories!

Congrats on number 400! Wow! and we LoVe every little thing you have to say!

Way to push through Dawn! The little men are adorable...and so is your little man. You get serious mom points in my book!

That little bit of extra effort - the step we can't take... it makes all the difference for us, doesn't it? I wonder if they'll ever know.

it may be silly, but your post just made me shed a tear! What a sweet memory that sprang up on an evening when you were tired and so many moms would have put it off. Good Job MOM! We will likely tell the sotry of his first Gingerbread man cookies to his kids one day! This is what the season is about!

So glad you went on ahead.. I know sometimes it just seems too much. But often I have to tell myself that these little moments are what our kids are going to remember when they grow up. Love your cookies too. Very nice! : )

this is so sweet. You are an awesome Mom...and here I thought I did good by scooping out premade dough for a few cookies last night!!!
I don't think I have ever made these either...care to come over and do it for/with me??? :)

A Little Of This And That said...

Talent and beauty combined. Wow. You got it going on, girlfriend.

May I steal a gingerbread man? They look scrumptious! :) Way to go Mom!

Wishing I could taste the cookies!!! I KNOW he was happy to have that time with you!!

Happy 400th!!! My mouth is watering...
yes because of the cookies, but also because I love to read your words.
;)

Dawn, that was the sweetest post! So often I am exhausted, so often I don't push through...but you rose to the occasion and brought so much joy to your son! I'll have to remember this story the next time I feel like I don't have a single ounce left...like right now after shoveling the entire driveway...and it's time to make dinner! :)

My little one wants to make Gingerbread men this year too. Thanks for the inspiration!

So sweet! It is so worth the extra time and effort to see the big smiles :)

Thanks for the birthday wishes, and yes, I DO want the recipe for the peppermint swirl and sauce!! Mmm!

Gingerbread men are a Christmas favorite around my house...I adapted a recipe when I was teaching preschool right after I got married--and I've been using it every year since. In fact, I just answered an email from my niece asking for the recipe...to make them for her boyfriend. Times flies and things change--but the gingerbread man are a steady staple. Glad you were able to push through to make it happen (I know that late afternoon tired feeling....)

I needed this, because I feel like I've been there don that on so much of it. But children think it's wonderful and special every time.
You're a great mom!

I attempted to make gingerbread cookies a few years ago and they came out horrible! LOL Yours look GREAT - although you really have molasses on hand? :)

I have missed you, too! This pregnancy is hitting me so much more than with the girls, which is odd considering I had TWO of them in me last time. I am 13 weeks and starting to feel a bit better, thank goodness.

Thanks for the well-wishes!!!!

"I could see the excitement in his eyes as he readied himself for his first taste...and I hope he could see the love in mine." So simple, so sweet, and I found myself with tears in my eyes...

I love that you went to the parade again. We did too. It was sooooo cold here though. Those gingerbread men look fantastic! Wow. And I love his eyes as he is biting into one :) Very sweet!