to be a part of something 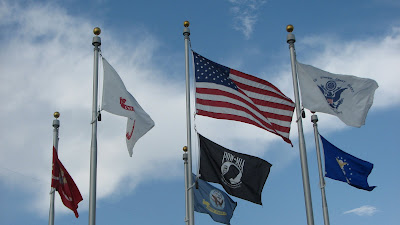 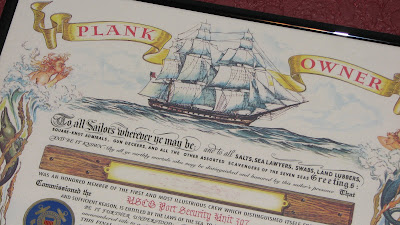 When I think of the years my husband has given to our great country, I think of the honor and pride he served with. His ten years were scattered across fourteen... each time frame creating a unique life for our family. It brings along memories of a time that, in the moment, I would have wished away... but now, that the chapter has ended, I am thankful we were part of. Ten years ago Eric was one of the original members commissioned into the USCG Port Security Unit 307. A plank owner... which really doesn't get you anything more than this certificate... but is something special, nonetheless. Ten years. Even though he is no longer an enlisted Coastie, the Coast Guard will always be a part of him... of us. This weekend we went and visited old friends... relived memories of a time past. It was hard to be apart in the days, weeks, months and years after 9/11... but Eric's job was to be there... and ours was to be here, holding down the homefront. And we survived... because we were a part of something bigger than ourselves. If it wasn't for the lost time... he would probably still be drilling with his buddies. But I am thankful he chooses to be home not missing these years of our children's lives... the ones that can never be relived. He gave countless weekends and over two years of deployment time to the reserves... he missed t-ball games and musical performances... he missed bedtime stories and a first lost tooth. He missed the first day of kindergarten and a pinewood derby or two. He missed our life. Together. But it was all for the good of our life as we know it. Celebrating the anniversary of PSU 307 was special... the old faces meeting the new... the stories and the memories alive in the air... and coming together... creating a new history of something they are each proud to be a part of.
Posted by Dawn
Email ThisBlogThis!Share to TwitterShare to FacebookShare to Pinterest

We are all very thankful for his devotion to our country....and thankful that he has a good family to come home to also! The true heros of our country are our service men and women.
Suz

Thank yous to your hubby.
I think these brave men and women can only do it because of their loved ones. If not for their support they wouldn't be able to give it their all.

Thank your husband for his Service, and thank you and your children for the sacrifices you made.

It is certainly something to be proud of.

I think of anyone who serves all the time. I have a little garden section I dedicate to those who serve. Its so small yet I want it to get bigger. I'm on the lookout for anything patriotic to place next to the red white and blue flowers that I have.

I hope your Memorial day weekend is relaxing.