Growing up, one of my favorite stores was Paperama. There you could find those glamorous tissue paper disco balls in every pastel color, bridal shower umbrellas that rained paper rose petals... along with every other paper good to make your party complete. They also had... personalized pencils. I would spin that rack 'round and around... searching for my name. More often than not... I would walk away frustrated and move along to the next spinner. Once in a great while though, my name did indeed appear among the others... and when that happened, my face could hardly contain my smile. I didn't need to have the item... just knowing my name had appeared was somehow enough.

So why... did I choose an unusual name for my sweet son? Truthfully, there have been moments when I have regretted my choice. I do recall thinking about this when we were choosing names... but I had fallen so completely in love with the name before he was even a breath in my body... and then there was no other choice to make. I rationalized that the name Cameron was so popular that someone was bound to start personalizing things with Cam... but I was wrong. Maybe, if Laura's name wasn't stamped across pencils and rulers and... well, stamps, then I might not feel so badly. And while life is not necessarily fair... I know that in this instance, I had a hand in the unfairness. My guilt has prompted me to celebrate his name and urge him to feel more special than left out. And being the great kid he is... that line of thought has been embraced whole-heartedly. Over the years, we have made due... and gone out of our way to find opportunity- we had a sheriff's star engraved at Disney World... we have had leather bracelets stamped... and we have sent away for items to be inscribed. It might seem silly to some... but if you have ever looked for your name and been disappointed, then you just might understand.

This week... a very special friend made my son's eyes light up and his mouth squish up in an "o" before it quickly unfolded into a grin. On her trip to Maine... she dug behind all of the pink hats and found a blue one... and brought it home... for a boy whose name is almost as extraordinary as he is. 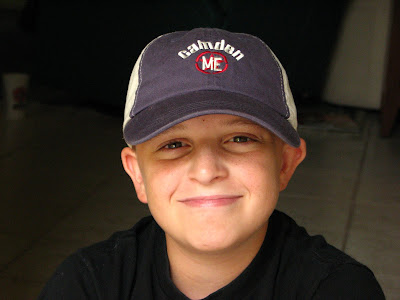 To be honest... Camden's eyes weren't the only ones to light up... although my eyes might have been the only ones moist with love.
Posted by Dawn
Email ThisBlogThis!Share to TwitterShare to FacebookShare to Pinterest

That is awesome. What a sweet and thoughtful gift.

this is so sweet!!! I love seeing his happy face.
My name is not usually out there either.
you know, you can have his name embroidered on just about anything at a little store I know of in Naples....not very expensive either. :0

I love this story... mostly because (I'm not sure if I told you this) our daughter is named "Maille" - it's pronounced "molly" - but, well, we'll not be finding many personalized items in our travels either! We're headed to LL bean this weekend to personalize a school backpack for preschool. Nice to hear how you dealt with all of that so well!

I am sure he was thrilled! He will wear that hat many years with lots of pride!

(I had the opposite problem--the spinning racks offered my name, but was always sold out ;(

what a sweet picture.

Kendra aka The Meanest Momma said...

Your picture is as sweet as your story. Add me to the "rack spinners", searching for my name who went on to give my kids unusual names.

I think Camden is a lovely name.

What a thoughtful gift! And a precious grin.

What a sweet story. With the names Layla and Aelyn, I too have thought about the fact that my two girls probably won't be able to find the named stamped items. But I just loved too much!

What a very beautiful and heart warming story. I just love it. Love it so much. He has beautiful eyes : )

Having a name that is not necessary unique but is spelled unusually...with only one "r"...I would have died and gone to heaven to find my name printed on one of those little plastic license plates all of my friend had attached to the back of their Schwinn's! I think it's awesome that you have gone to the lengths that you have for Camden!!!!