he keeps on shining

For hours afterwards my insides were revved up and my heart flip-flopped back and forth between disbelief and utter joy.  After a length of silence between us I would burst out again with other tidbit of excitement or share a random wonderful thought that had suddenly made its way into my stream of consciousness... and for the first twelve times, he smiled brightly.  I could tell then... that enough was enough.  At least for him.  But I could have gone on another thirty times.  Oh how thankful I was that when we picked up Eric and Laura from the airport I could start the gushing all over again...


I had hoped it would be a special night for Cam... I knew he would get an award for his grade point average, and because he was honored with a science award last year, I hoped for at least one more award.  But deep down, like only a mother can... I wanted more for him.  I kept thinking that he deserves one of those really cool awards that encompasses his grades and the nice, hard-working young man he is.  Yes, I know I am biased, as every mom is... but Cam has just blown me away this year with his straight A's and his work ethic.  And more than anything, I have been so pleased that he has been able to see the successes.  For so many years he worked and worked and worked... and I wondered when the frustration would set in, wondered if one day he would just say the heck with all this school work and give up.  We fought for him, we prayed for him... and victory finally came in the form of test results and an IEP.  No one wants their child to need the extra help at school... but when you know your child needs the help and your concerns are brushed aside for years, validation is victory and the extra help is a blessing.
When his name was called for a Science Pride award, I cheered.  And then when he made his way to the stage for a Five Star Math award I mentally checked off the list in my mind- special night?  Check.  With the award for his grades that will make three... and three awards?  Amazing.  I was whispering to my friend when they described the next award and so when they called his name again, I had no idea what he was receiving... but there he was striding across the stage, shaking hands with the teachers.  By the time he had received two awards for his grade point average I was beaming and my heart was fully content.  Five awards rested under his seat and I was thrilled for him.  It has been a banner year, a truly wonderful middle school experience, and to cap it off with a night like this was truly more than I had hoped for.

But God wasn't quite finished showing off.

It was the very last award of the night... the Principal's Award.  One girl and one boy are chosen from among teacher nominations for this highest honor.  I was really only half listening, so excited about an award my friend's daughter has just received... but then I heard his name, and I saw him pop out of his seat and return to the stage again.  And all at once I was laughing and crying and cheering... fumbling with my camera, which was all but put away in my purse, and just beaming. 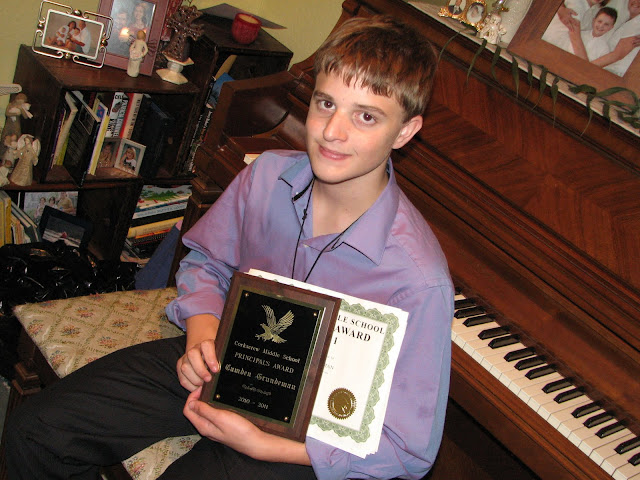 Making our way out of the auditorium, in a crush of congratulations, my heart and mind were spinning.  We caught two teachers for quick photos and big thank yous... and many friends and parents we have known along the way stopped to shake Cam's hand.  It might as well be the Pulitzer Prize there under his arm.  Oh yes, my heart feels that big...
Never doubt the power of God, who can do all things.  All things.  He places loving teachers in the path, and issues challenges that seem impossible... but then He instills the tools to overcome.  He creates a desire for learning and an excitement that is contagious, so that the stumbling blocks only trip you up instead of making you want to give up.   And in the love that grows in a mother's heart, God adds a fierceness that He knows will be used to fight the good fight... 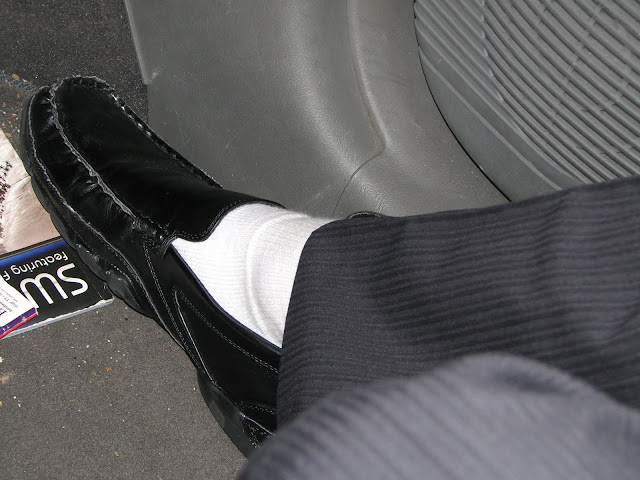 and He tosses in a sense of humor so that  when she realizes that he wore white socks with his black dress pants and shoes there will be only gales of laughter.
Posted by Dawn
Email ThisBlogThis!Share to TwitterShare to FacebookShare to Pinterest
Labels: camden, faith, gratitude

And I love that you shared about the white socks. . .All boy!

Congratulations to your amazing boy. I know that his success is a testimony to his mama's never giving up on him. :)

WOW! Congratulations, Cam!!! It's amazing that when our children do well we get more excited than they do! : )

And Congratulations Mom and Dad! He had a great start at these awards because of y'all!

Wow. What else can I say besides Wow? I'm practically speechless. But I do want to say congratulations--to all of you! I'm proud right along with you!

God's gifts and miracles are mighty. Your cooperation with God's will, made the difference.

Congratulations to the graduate, and his parents.

Dawn!!
How absolutely incredible :)
Yay for Cam! Yay for his family! Yay for God :)

I can't believe you were talking while this ceremony was going on. :) I am so happy for Camden....getting recognized for the wonderful man he is. HE deserves this....so proud to know him.
I'd have to say, Camden's parents have done a wonderful job. When you see them, pass on that bit of info. Ok?