The other day, when I arrived home from work, there were three ceramic pumpkins sitting on my entry way table... a gift from my thoughtful man. Pumpkins? Oh yes... it is almost fall. Sometimes I really need to stop and think- what season is it? If it's April it must be... oh, spring... right? I suppose it is just me, missing the seasons, and getting lost in the calendar. It always surprises... that I could not know. And this brings me back to the pumpkins. Is it really fall? Almost. I just don't feel it though... even though I love fall... and bringing out my decorations. Yesterday, upon entering Publix, I paused- because there it was. Fall. I couldn't put my finger on it, and then, I realized it was tickling my nose. Ahhh... the cinnamon broom. Another deep breath in, and the scent led me. Just what I needed to bring me out of summer... a cinnamon broom. Just one for today. Maybe next week I'll pick up another. 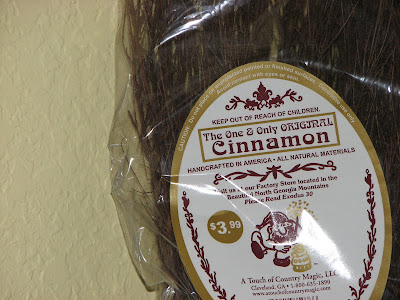 We hadn't quite made it out of Publix yet though... because where there is a season change, there is seasonal candy. My husband's equivalent to the cinnamon broom? mellocream pumpkins... Yes, we have seen the signs... fall is in the air. 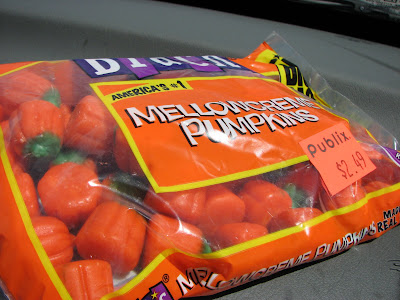 This is cute and very true for me too. I have to actually stop and think to myself...."is it going into summer....or is it going into fall"???
So hard to tell around here.
I got all my fall stuff out this past week, so when I am in the house I will KNOW what season it is.....