in the nick of time

I almost forgot... to take the kids to see Santa. In the midst of celebrating the season and checking off lists, I almost forgot. Maybe in the back of my head I thought that they wouldn't want to go... but all of a sudden, it was important to me. When I asked Cam if he wanted to go and see Santa, he said Yes! with so much enthusiasm that I was thankful that the thought passed my way- because surely it would've been disastrous... when he finally remembered on Christmas Eve.
We have not been to visit Santa at the mall in years... for one reason or another, we have happened to be in Disney World, or in the nearby Disney MarketPlace, at some time during December... and we have had the chance to visit Santa there. This year, we headed to the mall. I was pleased that the line was not too long... and the wait was not too bad. It was just enough time for me to look into my daughter's eyes and say You will smile, and you will look like you are having fun... and then give her the Look a few more times. She didn't want to come. She didn't want her picture taken. She didn't want to sit on Santa's lap. But she would... Because I said so. 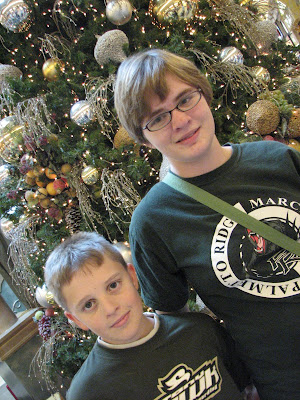 Just before our turn, the woman running the Santa Photos told me I would have to put my camera away... no photos on the set. I smiled sweetly, and said Okay and turned off the camera. But there was no way... NO WAY that I was going to not take my own pictures. I would buy one of her exorbitant packages, but I was certainly going to take my own photos as well. I was determined. She made me mad.
When it was finally our turn, Laura & Cam approached Santa with their smiles, and each headed to the side of Santa. Oh no... Santa was not going to accept that... and soon they were both perched on his lap... and I began snapping pictures on the sly. (I have had my camera taken away by security a few times before, so I was not really worried... they are my kids! And I figured, if I had to, I would call my husband the Deputy to get me out of jail. Yes, that is how serious I was about taking the pictures!) 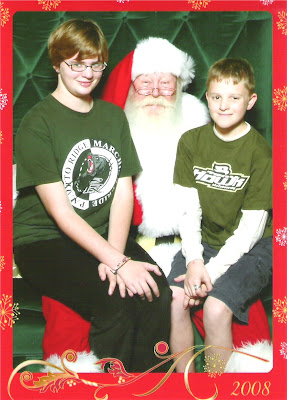 Once the Official Santa Photo had been taken, Santa got my kids talking... really talking. Especially Laura. I could see them just chatting away, holding up the line... But I loved it. He drew her back in... and her smile made me smile... made my heart feel light. Ahhh yes, the magic of Christmas.
I did get spoken to about using the camera again... but at that point I had taken a few good shots, and had captured a moment, or two. Because I had to be sneaky, I did miss a second try at a sweet shot of Cam and Santa having a heart to heart, but I am counting on another try... another year. 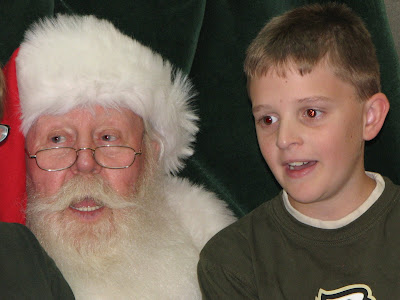 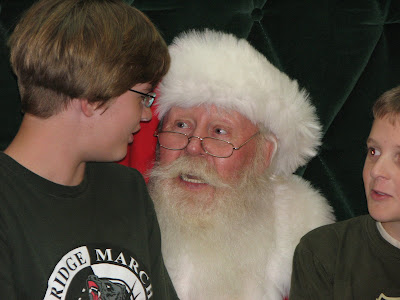 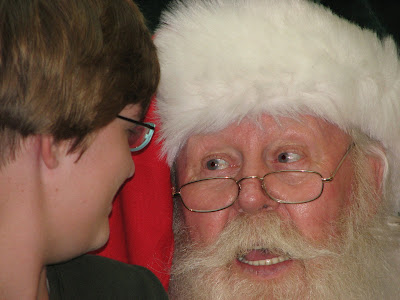 Just before bed, I remembered to asked Laura what she and Santa were talking about... Oh, I told him I wanted a friend for Scout (the cat.) He told me that he wasn't allowed to bring a real cat, but he told me all of the kinds they do have- ones that meow, ones that walk, ones that breathe up and down.... Oh yes... Thank you, Santa... for knowing just the way to reach this young lady. Thank you.
Posted by Dawn
Email ThisBlogThis!Share to TwitterShare to FacebookShare to Pinterest

Oh so sweet. And for you to cause another scene with the camera? geeze....it never ends does it? :)
Glad you could convince them to visit w/ santa...had I been there I would have had to cause a scene getting the girls into line!!!
Great pics, even though though they are ILLEGAL!!!!

I LOVE this post, and I love these pics! And GOOD FOR YOU for ignoring that legalistic Santa's Elf about the photos. Harumph!