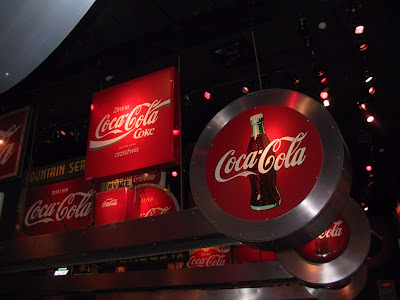 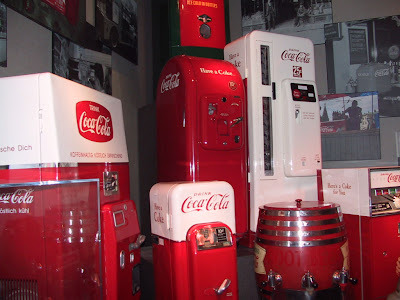 Yes... Coca-Cola. The summer we vacationed in Georgia, my husband indulged me. It was not on our list of things to see... we had already decided to forgo it in favor of Stone Mountain and the Georgia Aquarium... but while we were at the aquarium, there is was... across the grassy common area... and I really wanted to go... to the Coca-Cola museum. I didn't say a word... until the night before we were leaving. And, because he loves me, he said we could go on the way out of town. I was really stunned... and so very happy. Crazy... I know. But I love Coca-Cola. Yes, the beverage (although I am a Diet coke fan now!) but so much more than that... the commercials... the way they are a part of Christmas (Santa Coke!)... the shape of those glass bottles... their participation in the Olympics... the way they make me have a Coke and a smile! And so... we went. It was amazing to see all of the memorabilia. And before you really enter the museum part, they make you watch a movie... and okay, I'll admit it. I cried. It was those little construction workers working inside the Coke machine... and it made me cry. Eric just rolled his eyes, and shook his head. But I think he knew... how much it meant to me that we were there. There wasn't any part of the place that I did not enjoy (I did not taste the Beverly flavor of Coke like Eric did!) We sat and watched old commercials... and we laughed, and I cried... and we sang along... I'd like to teach the world to sing... It was a great day... it is a great place. So, yes, my "C" is for Coke. What other company loves their consumers so much that they would admit their mistake, and give them back their Coca-Cola Classic in just 79 days? 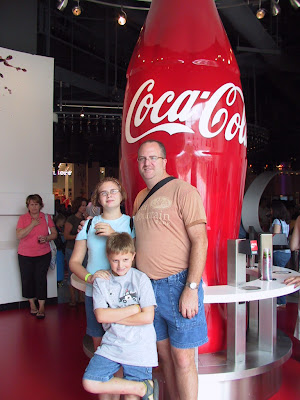 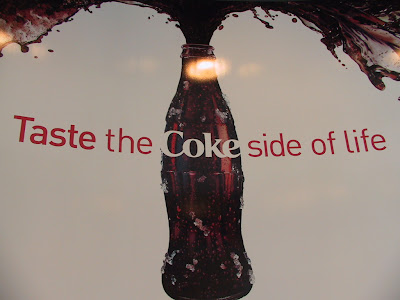 Happy A to Z Monday!
Posted by Dawn
Email ThisBlogThis!Share to TwitterShare to FacebookShare to Pinterest
Labels: abc

I love it!
I am a Coke Fan too-a day doesn't go by without that smile for me. :D

Loved this post! You would love this diner by us - they have one of the largest collections of Coca Memorabilia and it's a 50's style diner w/ a jukebox!

Makes me want to teach the world to sing in perfect harmony...

We were in Georgia a couple of years ago for a wedding and didn't get a chance to visit. :( But we did make it to Stone Mountain (on 4th of July, no less!) and it was great!

What a cool museum.It is sweet that you were so touched by your hubby making the extra effort to get you there.I had a similar experience with the Potato Museum in Blackfoot,Idaho;<) Bake to Coke:My tastes have changed,& for the first time,I drank Coke this summer, and LIKED it!Now I keep a few of those little bottles in the refrigerator for when I get the urge....only thing is I get the jitters from caffeine so have to be careful.

OHMYGOSH!!! World of Coke is one of the FUNNEST things to do in Atlanta! The taste testing is a blast! Which one was your favorite? (I actually love all the Latin America flavors!!) It really is a neat place to go! Did you like the aquarium? I'm "so so" about the aquarium. It's nice, but always SOOOO crowded. We have a new baby Panda at the zoo.... which I'm sure you know.
I'm so glad you got to do the World of Coke - it really is a lot of fun!