We could see it from the road even before we arrived. The ferris wheel stood taller than all, reigning over the rest. It is still, and probably will always be, what entices me... what calls me to the fair. That, and the most delicious aromas that cling to the breeze and swirl around your senses. French fries, popcorn, bbq, corndogs, super tacos, spun sugar, elephant ears & deep fried oreos... as if the tiny top of the food pyramid spilled over, no longer able to contain the decadence. Though the sun was still shining, the colorful lights were already spinning and flashing fun, the way only carnival lights can. Even still, the golden light cast by the sun, hanging low in the sky, competed for attention... and for a while won out, hands down. 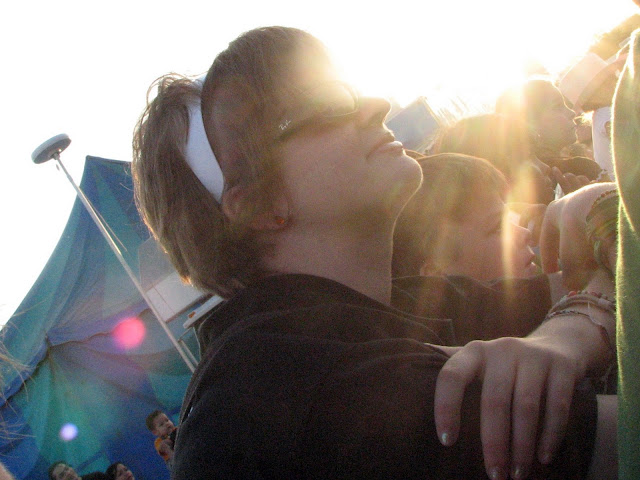 I came, expecting to watch their faces full of glee as they flew 'round and 'round... but I ended up spinning and flying right along with them.   There isn't anything more fun than being in the laughter instead of watching it... feeling the rush of air in your face, or kicking your legs out into the air as you soar from the heights of the Skyflyer. 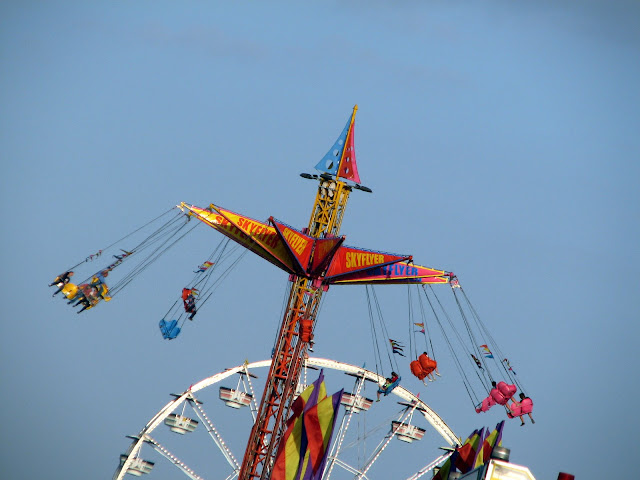 And when, at last, we came 'round to the ferris wheel, Eric gave in and joined us for the ride.  Far below, lights were flashing... and they blurred as the rides were spinning with dizzying speed.  Distant laughter and an occasional giddy scream floated up as we gazed down at the midway... and taking in the view, we were mesmerized.  All too soon, the giant wheel started its descent, and we were delivered back to solid ground... but that beautiful, floating feeling stays with me as we wander, and the night still feels full of magic.

We played. We laughed. We had fun.
And we had deep fried Oreos.  Delicious!  And only once a year...
Posted by Dawn
Email ThisBlogThis!Share to TwitterShare to FacebookShare to Pinterest
Labels: fun

summer is fair time for us...i wish it were summer!

I may have to move south, warmth, the beach AND $10 haircuts...i paid wayyyy more than that!

Only you could make the fair sound enticing to me. Lovely photos...glad you had a fun time with your sweet family.
Deep fried oreos...who would have thunk it?

Once a year just doesn't seem often enough! but, then again, would there me *as much* magic if it were more often...

and somethings are just worth waiting for!!

I can smell it. Taste it. Feel the exhilaration of the rides and hear the laughter!
Sounds magical!
Hope you have a wonderful weekend!