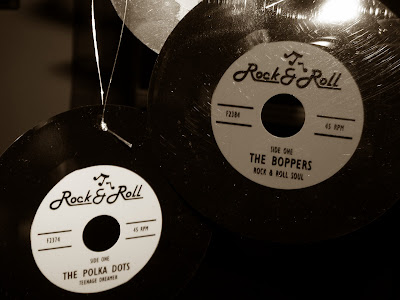 I love juke boxes. Old... new... doesn't really matter. I just love them... the actual instrument, the 45's that spun inside, the oldies music... I think my first exposure to a juke box was at Papa Gino's... one of the pizza places where I grew up. Each table had their own mini jukebox- yes, right on the table! We would flip, flip, flip through the songs until we found the perfect one... G-8... or whatever other number/letter combo that would lead to our favorite song singing out through the tiny speakers. We had a juke box in our ice cream shop... I wish we had kept it. I remember going to pick up our "new" juke box- and being slightly disappointed that it wasn't what I imagined- rounded top, neon lights... but once we had it in the store, what it looked like didn't matter- I just loved it... felt special that we even had one. It got 3 plays for a quarter... and it was filled with oldies. We all had our favorites... our three songs that we would always play... and then there were others that we knew drove others crazy... and so we just had to mix those in once in a while! My top three? Only The Lonely, Smoke Gets In Your Eyes, and Build Me Up Buttercup. And my "extra?" Sunshine, Lollipops and Rainbows. Some of these songs are still part of my every day... my cell phone ring tone is Build Me Up Buttercup... we used "Sunshine, Lollipops and Rainbows" on my sister's wedding shower favors- and when we get silly, Mom, Tina and I are likely to break out in song- Sunshine, lollipops and rainbows...everthing that's wonderful is what I feel when we're together... A lot of memories were built with that juke box. I saw one at Target the other day... a table top version- but no 45's... you plug your ipod into it. It's just not the same though. It seems like in a world that changes so quickly, there are just some things that conjure up memories of simpler times... and though it would be almost impossible to go back, (and I'm too young to have memories of the 50's, other than Happy Days) it would be nice, for a day, to go back in time, don a poodle skirt, drop a quarter in the juke box, and dance in my socks.
Posted by Dawn
Email ThisBlogThis!Share to TwitterShare to FacebookShare to Pinterest

I have never heard of this song...I do remember eating at diners with the juke box on the table though...very cool. I would like to have one at my table...instead of the TV in the room.

This is so funny to read this post.... we stopped and had lunch today at a restaurant that had a jukebox and I, of course, had to load it up with quarters... we listened to Johnny Cash and Elvis.

There used to be a diner in Atlanta (The Majestic) that used to have "personal sized" jukeboxes on all the tables.... don't know if they still do or not. Cute idea, though. :-)