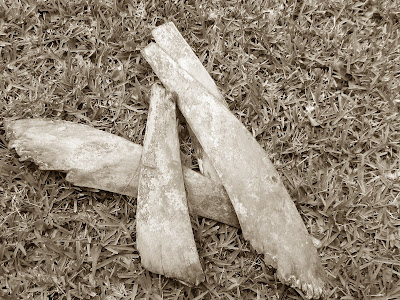 Sometimes when we are driving along, we see palm trees in need of a good trim... under the lush, green palms hang the dried, dead layers of fronds. The trees look so pretty when they are trimmed just so- and the trimmings are out for trash pick-up. But, it is often said that "one man's trash is another man's treasure." On a whim, I signed the kids up for an art session at the public library. It was called "Zoo Fronds with Heidi." You brought your own frond and turned it into an animal. To be honest, my hopes for actual art were not high... but I thought the kids would have fun... and some of their friends were signed up too... and the results from this would certainly be better than jumping off a bridge! Turns out, I was wrong (not about the bridge!) We now have actual art... painted by my brilliant children, who surely take after their Gramma... and had inspiration from "Heidi." 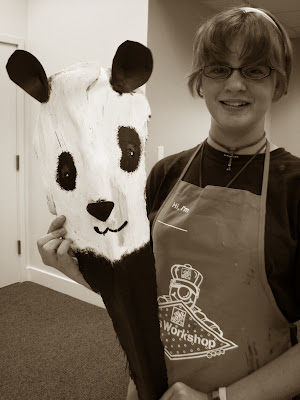 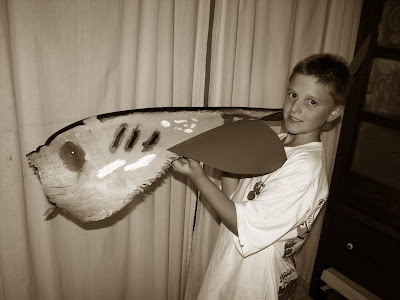 Sometimes we just need a different perspective... we need to look for the possibilities instead of what is right in front of us. Sometimes we need to do more than just look... sometimes we have to see. We all had a chance to that today... and we will probably not look at another palm frond again without seeing what could be.
Posted by Dawn
Email ThisBlogThis!Share to TwitterShare to FacebookShare to Pinterest

how awesome. I too would not have expected something so pretty from trash. that art teacher must have a girl scout leader....:)

they really are awesome. suz, if you have a chance, stop in at the library! heidi's art is on display... and while my kids did a great job, hers are just a touch better!!

WOW! You have some REALLY talented kids!