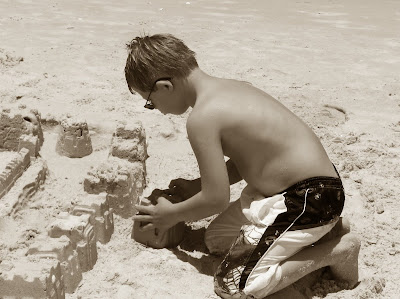 One of my very special friends just turned ten... and I was fortunate enough to have the chance to celebrate with him! Ten years of love, laughter, joy and wonder... that's my buddy. Anyone who meets him knows... he'll melt your heart in two seconds flat- if not sooner. He just has a joy for life that goes beyond what I see from others, and I love him... Months before he was born, I cried with his Mom. I'll never forget that night when I felt something was just not right with her voice and she told me- her baby had Down's Syndrome... she had just found out. Our families were already quite connected, as our four year old daughters were inseparable, and so, I felt her pain deeply. As the time passed though, grief turned back to excitement, and when this red headed bundle arrived, there was only joy. These years have passed with so much laughter and learning- certainly, never expect the expected... just not going to happen. And even when you start to expect the unexpected, you'll be wrong. It's almost a guarantee. I don't think I could love him more if he was my own... he is just that special. When I talk about him to others, I hardly ever mention the Down's... because that is not who he is... it is just one small detail that is in his make up... it is not what I want people to know about him. I want them to know that he is funny... that he is quirky... that he is a video game pro... that there is nothing he cannot do, or won't try... that there are a few people he addresses as "best friend," and my husband is one of them. I want people to know that this little guy gives a great hug, and if you are lucky enough to be a recipient, you are lucky enough. And so, on this wonderful birthday, when he pulled me aside for a hug, had his picture taken with me, and played with my children, I felt God's smile all around us.
Posted by Dawn
Email ThisBlogThis!Share to TwitterShare to FacebookShare to Pinterest

awww. That is beautiful.
I think he is a loveley boy too. Always happy. He has a great family...and great friends.

my little friend's mom sent me an e-mail... I loved this! I don’t know if I have ever told you how much it means to me that you feel the way you do about my boy. I will never forget the first time you saw him, sleeping in his crib. You are the only person I remember (other than us) who looked at him for the first time and told him that he was “just perfect.” And you were absolutely right! It is so wonderful to have you love him the way you do.

That is beautiful. I have a son who came into the world with a lot of "issues" and, although it was very hard at the time, you see certain "glimpses of life" that you would not see otherwise, when you have a Special Child.

Is your friend familiar with the piece called "Holland" written for parents of special needs kids? If not, I'll be happy to email it to you (or send it to Suzanne, and she can forward it to you). It's absolutely beautiful... it was given to me when my son was a baby, and it really helped me to see life through a different 'lens'....

Oh, what a beautiful tribute to a lovely young boy! His life and your story remind me about why we should all value every life no matter what! Praise God for him.