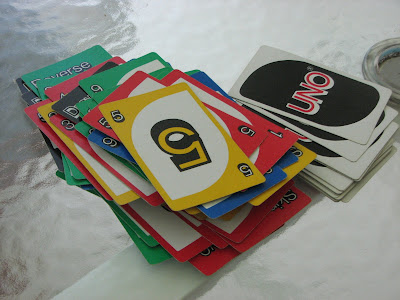 I think we played eight or nine hands of UNO yesterday- Cam, Gramma & I. What a game! I love a game that stands the test of time- one that I loved as a kid, and that my kids love now. Over the years, there have been countless versions of the game- they keep trying to make it better or more fun. Uno Attack is pretty fun, but Barbie UNO? It's just cruel with that "trade hands" card! Regular old UNO is just fine with us... because I think a game is just a game- it's the fun YOU add to it that makes it fun to play time after time after time! And I think my family sure knows how to add the fun. It's the game where you are allowed to be mean to each other, in a playful way, and get away with it. "Draw Two!" No, I mean "Draw Four!" Ha, ha "Skip" you! Oh, I don't think you have enough cards, "Draw Two" more!Well, you don't get away with it for long though- before you know it, someone throws down a "reverse card" and the table is turned- revenge is sweet! We played UNO a lot growing up... but the most memorable, to me, is when we were up in Vermont at Thanksgiving and we'd play with a table of nine. There was so much laughter. And last summer, Laura & I started an ongoing UNO game while we were camping at Stone Mountain. I hope they never stop making UNO cards... it's so much fun... and even if you lose almost every hand out of nine, and your Gramma beats the pants off of you, you walk away smiling- not because it's fun to lose, but just because it's fun to play.
Posted by Dawn
Email ThisBlogThis!Share to TwitterShare to FacebookShare to Pinterest