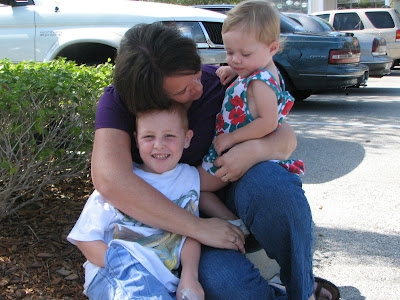 My nephew started kindergarten Wednesday... a huge step for him, and Tina! When he went to Kindergarten Round Up back in April, he decided that he wanted no part of going to kindergarten- but after going to the Meet and Greet last week, and finding out that he would have dinosaurs in his classroom, he decided it would probably be okay. Thankfully, Oakley had a great day! After school, Tina visited my blog, with Oakley, to show him the pictures of when his cousins went to kindergarten. His reaction? Laura is the most beautifulest. Tina replied that Yes, she is so cute. Apparently that was not what Oakley meant, so he told her No. She is not the cutest. I said she is the most beautiful to me. And what is more beautiful than that?
Posted by Dawn
Email ThisBlogThis!Share to TwitterShare to FacebookShare to Pinterest