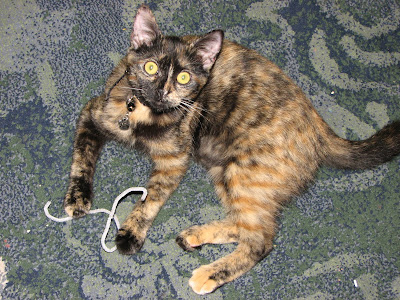 Little Scout just lights up our life... she purrs, she snuggles and she chases her tail. Sometimes we think she is part dog- she loves to play fetch and is quite often seen carrying a toy around in her mouth! Camden has a little green Neopet guy that he has graciously passed on to Scout. She bats it around, chases it, and then carries it around for a while. But her favorite toy, by far, is any chenille stem (that's the fancy name for pipe cleaners!) she can get her paws on! This afternoon, I noticed she was playing with one- batting it across the room, chasing and sliding after it. After a while, I saw the she was carrying it around the living room. I closed my eyes for a quick nap, and when I opened my eyes, she was still playing. Still toting it around the house... I think she played with that chenille stem longer than either of my children ever played with any one toy at one sitting. It just made me laugh... and wish that I could be amused for so long by something so silly.
Posted by Dawn
Email ThisBlogThis!Share to TwitterShare to FacebookShare to Pinterest